“Why Would We Say No?” Newlyweds take over Starving Artist Café 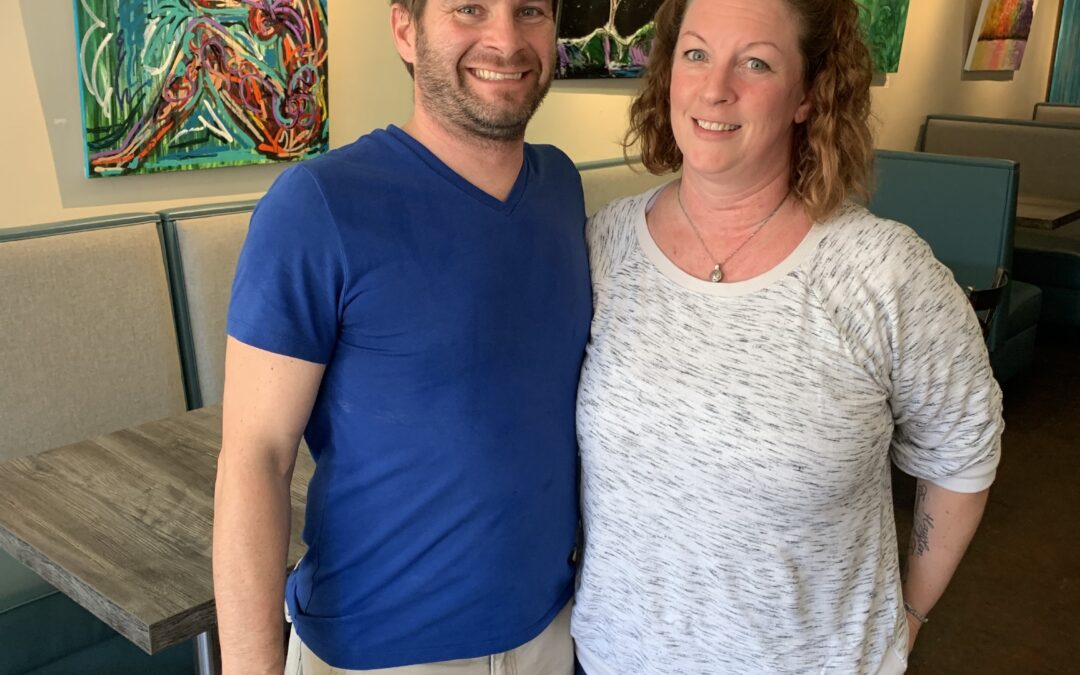 Shanna Myers and Jamie Windemiller went on their first date at Starving Artist Café in November of 2021. Less than a year later, they were married … and running the Norfolk-based restaurant.
What transpired in between has all the elements of a Lifetime movie.
Windemiller, who lives just a few blocks away, had been a Starving Artist customer for years. Over time, he began teleworking from the café and became good friends with the owner, Kim Keene. He helped her with maintenance work and even started baking muffins, which became popular sellers on the weekends.
Myers, on the other hand, lives in Newport News and had never heard of Starving Artist until Windemiller suggested they meet there for a first date.
“I didn’t even know it was here,” she said. “When I was in the Navy, this was an area you kind of stayed away from 20 years ago. So when he was like, ‘Yeah, right off Colley,’ I was like, ‘Oh, gosh. All right. I’ll go.”
Myers showed up and was immediately won over by the art-filled café—and by Windemiller. They talked for four hours and have been together ever since.
“We put all the stuff on the table,” she said. “You know, when you’re older, you don’t want to dilly-dally.”
Fast forward to June. Starving Artist was doing well, but Keene, a breast cancer survivor, wasn’t. When Windemiller visited her in the hospital, she revealed that the cancer had returned. She also asked him if he would be interested in taking over the business.
Windemiller called Myers, who, by coincidence, had quit her job the same day.
“When he told me that she wasn’t doing very well,” Myers said, “I was like, ‘Are you kidding me? Why would we say no?’ We didn’t want her to feel like we didn’t have her back.”
Factor-in Myers’ culinary degree, management experience and entrepreneurial dreams—not to mention the fact that she’s also an artist—and it was a perfect match.
For his part, Windemiller was happy to help Keene and Myers—and to carry on the legacy of his beloved neighborhood haunt.
“The last thing I want to see is it just get sold off or get broken up into something else,” he said. “Because that’s how I spent many, many, many days and years—hanging out, working, helping fix stuff. I love the place.”
After a month-long transition period where they both worked at the café and started taking over the bills, Myers and Windemiller went to city hall for their business license.
They ended up getting their marriage license the same day.
Since closing on the sale, Myers and Windemiller have trimmed the menu a bit and raised prices—also a bit, just to keep up with inflation—but business has remained steady.
“There’s a good amount of regulars,” Windemiller said. “But we’ve actually noticed quite a spike

in new customers. Whether that’s different modes of advertising we’re doing or maybe just word of mouth, we seem to have a lot more new people coming in.”
Starving Artist Café is located at 4408 Colley Ave. in Norfolk. It is open from 8 a.m. to 2 p.m. Wednesday through Sunday.

From Starving Artist to starving artist …
Kim Keene, who sold Starving Artist Café on Sept. 1, recently completed four months of cancer treatments and will soon undergo a PET scan to determine next steps.
“They really came through in a time when I really needed someone to take over,” she said of Shanna Myers and Jamie Windemiller. “So I owe a lot to them, and I’m happy that they’re keeping it going.”
She stays busy painting and was recently accepted as an associate artist at the d’Art Studio in Norfolk.
She joked: “I’m actually a real starving artist now!”