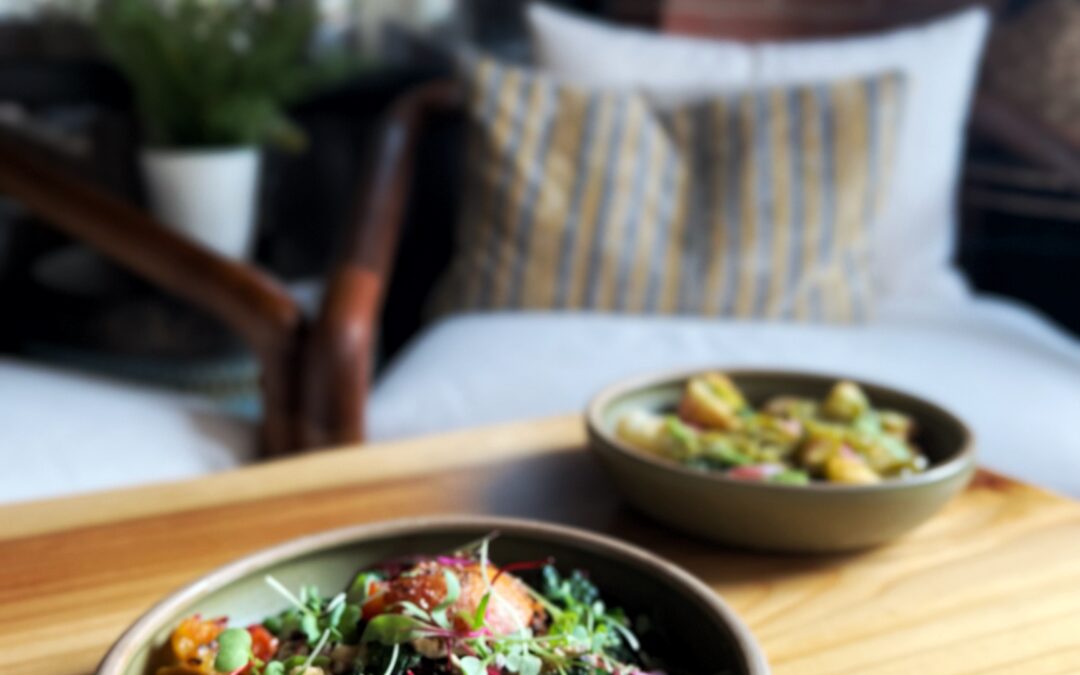 An open kitchen with a wood fired grill is not all that smolders at Quemar.   The namesake smokiness is this restaurant’s signature, lending distinction and a nuanced layer of flavor to the cuisine while wrapping diners in a subtle mouthwatering aroma.  But the interior décor of the lounge, restaurant, and patio is as sultry and seductive as the menu.

The synergistic progeny of good friends John Stein, of Baker’s Crust fame, and Kelly and Brian Large, aka Kelbri, Quemar is a celebration of the cuisine of South America—plus Mexico and Central America—style, and smoke. Though Chef Evan Drake didn’t set out to create a vegan menu, he wanted the plant-based people in his life—as well as his mostly vegetarian wife—to feel as welcome as carnivores.  So the menu happened organically and leans into dishes that are naturally vegan like mole verde, which doesn’t need dairy to burst with rich, satisfying flavor and texture.

Infatuated with Latin America, through which he tasted his way for 10 months, and classically trained at the Leiths School of Food and Wine in London—he had met a British gal in Mexico and chose the school to be near her, now his wife—Drake calls the menu at Quemar “an amalgamation of a lot of things.”  Though he never studied Latin cooking formally, he pursues it as a passion and a reflection of how he likes to cook and eat.

In addition to not-your-garden-variety—though certainly garden-fresh—chips, salsa, and guac, the vegan menu features six other plant-based dishes which embrace the restaurant’s commitment to from-scratch dishes painstakingly crafted from authentic ingredients like tortillas made from imported ancient heirloom varietals of corn.

Drake claims that deceptively simple dishes like Smashed Beets are all about time over the coals.  “Fire gives it everything,” he insists.  I will give the fire its due, but also the chef who describes the dish as a riff on Argentinian food he had read about:  simple grilled vegetables tossed in a vinaigrette.  For his version, Drake combines tender mustard greens, which “take on a whole new life when they are grilled,” with smashed beets—poached before they are grilled—and tosses them in a red wine vinaigrette.  If the dish sounds meh, trust me, it is more than the sum of its parts.

In addition to the beets, I sampled the Loaded Yuca Frita, a rustic-elegant version of loaded fries.  Actually, they bear no resemblance.  Perfectly crispy-on-the-outside-creamy-on-the-inside chunks of fried yuca are set-off by mouth-puckering pickled red onion and jalapeño, a perfect foil for the pleasingly unctuous yuca.  Chimichurri, my favorite condiment of all time, guilds this lily, along with a sauce containing avocado, to which I am allergic.  Without missing a beat, the kitchen subbed a roasted salsa verde that I would happily sip through a straw.

My third taste was of Charred Chayote Squash.  Drake describes this typical Mexican squash as possessing body and texture that some summer squashes lack.  Served with red rice and those addicting grilled mustard greens, the squash is bathed in a pistachio and poblano-forward mole and accented with a grilled orange wedge about which I still fantasize.

I look forward to returning for the Chayote Enchiladas, Grilled Asparagus, and even the Mixed Green Salad which replaces tomato, croutons and ranch dressing with apple, cucumber, pickled onions, and pepitas kissed by a roasted jalapeño and agave dressing.

To be honest, I would probably be perfectly content sipping on a flight of sauces and dressings, but you may not want to miss sampling a cocktail at the Bar Tranquila, an anchor of the lounge.  Virtually all liquor and spirits made without cream—including tequila—are vegan-friendly.  We dined on the lounge side, seduced not only be the vibe, but by the warm and helpful bartender who doubled as our server and saved the day.  The only notable drawback to my vegan experience was discovering that valet parking is required in the tiny lot, a function of a veritable onslaught when Quemar first opened.  When we explained that none of us carries cash, she said we could simply add an additional $5 to our tips in exchange for a fiver for the valet.  Crisis averted.

In every way, the interior of Quemar no longer bears any resemblance to the erstwhile and beloved Bella Monte which occupied the space at the corner of Birdneck and Laskin Roads in Virginia Beach for decades.  What do you do when you want to carve what is arguably one of Virginia Beach’s most stylish spaces out of what was surely one of the Beach’s most traditional spaces with a 1990s vibe?  Partner with an Occupational Therapist, of course. While Kelly Large’s quarter century as an OT who loves to cook left no time for formal design training, she has an eye—and a brain—for interior transformation.  But she and her developer husband, Brian’s, former projects were residential.

Though she modestly claims the design “from the back of the house to the front door” just “fell together” and is quick to credit her team, including Brian, Drake and, of course, Stein, it only did so because of painstaking planning and procuring, not to mention prayer.  The whole process, which she terms “a blur,” began at the High Point Furniture Show in October 2021.

Four large rugs—two on the floor and two on the wall—and four shipping containers later and the design had taken shape.  The style defies easy categorization with dark walls, but lots of diffused light, and rich colors and textures like burnt orange velvet.  And it skews bohemian-industrial modern with a hint of global chic.  All the wood components—except the two existing reclaimed wood walls—and there is a lot of it, are the handiwork of artisan, Jeff Shaub.  The graffiti—yes, graffiti—which started as an assumed joke was made to work by their friend and artist, Silas Baker.

And the rattan monkey, well, if anyone has information about it, Team Quemar would really like it back. But monkey or no monkey, you should treat yourself to a night of Latin-inspired cooking and lounging, including in the living room-style patio spaces with their nod to South Beach in the heart of Virginia Beach.