REVIEW: Stay for the Food at Civil Libation Bistro 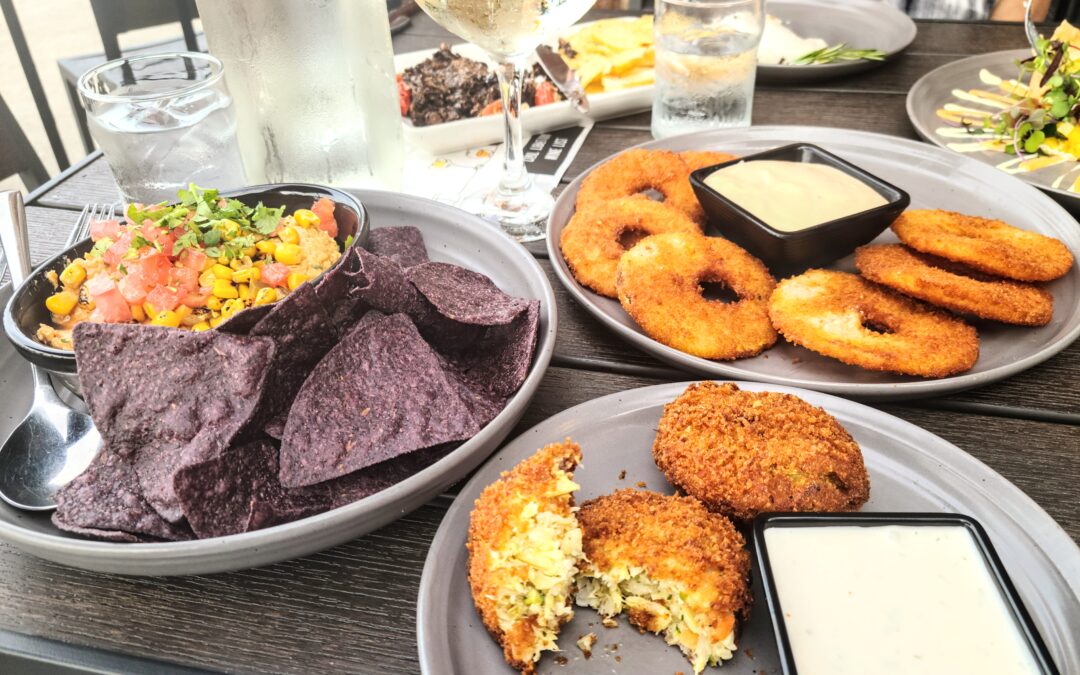 With a persistent heat index in the triple digits and a cute hand-drawn cocktail menu, no one will judge if you go to Civil Libation Bistro for the hand-crafted cocktails, but be sure to stay for the food.  While this southern Virginia Beach establishment is far from vegan, its plant-based options are delicious, generous, and unique in our area.  Plus, virtually every brand of “hard” liquor and distilled spirit—except those with cream and honey—are vegan.

A bistro-style café had long been a twinkle in Delynda Woods Rowell’s eye, but first there were three stepdaughters to raise, yoga teacher certification, and the 2014 birth of the immensely popular Whiskey Kitchen, her husband Kevin’s answer to a gastro pub “that wasn’t too froufrou.”  Her response to his “I have an idea,” after driving past the erstwhile Off the Hook location in Strawbridge Marketplace, was “Absolutely!,” noting that Kevin, who honed is craft at Burton’s Grill, is “fantastic” with food cost, product knowledge, streamlined operations, cross-utilization of product, and menu creation.

Four years later, when Fresh closed in the very same shopping center, Delynda recalls being “over the moon,” having long dreamed of a casual-refined spot for cocktails, cuisine, and connection.  “If you come casual, I’ll take care of the refined,” she enthuses.

Because Kevin was hoping he had come to the end of his most intense years in the restaurant business, Delynda said, “I’ve got this,” pulling some of the best and brightest from Whiskey Kitchen to play for Team Civil.   One of them, bar manager April Cacatian, has established a name for herself not only with her recipes for creative concoctions to imbibe, but the drawings on the menu and the art on the lounge side of the bistro.

On the dinner side of the operation, Chef Anthony Pascua helms the kitchen, executing Delynda and her staff’s collaborative ideas with plenty of his own.  As for the vegan offerings, Deylinda notes that there is “a pretty heavy vegan presence in the yoga community” and that she “leans toward that lifestyle.”  Though she isn’t vegan—but has a daughter who is—she says, “I enjoy that style of eating and I enjoy the creativity of it.”  Plus, she wanted to create a place where “everybody can come to the table…everyone can find something,” so gluten-free guests are also not forgotten.

The vegan offerings reflect that creativity with dishes like Squash Rings with chipotle dip ($10.)  A huge portion—large enough for sharing and still taking home leftovers—these rings are large, impossibly thin disks of butternut squash, dipped in a beer batter and panko bread crumbs, and deep fried for an ideal crumb-to-squash ratio that provides plenty of crunch.  Smokey and tangy chipotle aioli made with vegan Just Mayo is the perfect creamy counterpoint.

Though their Veggie Fritters are served as part of a delectable-sounding Veggie Bowl packed with sautéed greens, avocado, roasted tomato, and potato hash served with a horseradish dill sauce ($14) or as “Toppers,” my companion and I ordered them as a stand-alone and these plump crispy patties can hold their own.  Made largely of shredded zucchini, artichokes, and carrots, coated in panko, deep fried, and served with the drinkable Just Mayo horseradish dill aioli, these patties aren’t “vegan crab cakes,” as Delynda is quick to point out, for they aren’t faux anything.  They are delicious fritters with moist, balanced texture and flavor.

The Street Corn Hummus, vegan without the cojita, is a mound of hummus topped with charred sweet corn, tomato, and fresh cilantro served with blue corn chips.  I found the hummus just a hint north of too tangy—I was expecting more smokey—but an overall enjoyable dish.

A B & B (beet and bean) Burger and a Beyond Burger round out the vegan offerings, though other delectable-sounding dishes can be tailored upon request.  The B & B is topped with the vegan chipotle aioli and both burgers are served with vegan gouda, unlike at some restaurants that serve a vegan patty with bread and condiments that contain dairy.   There is also a weekend brunch–and Civil takes reservations—where a chia-battered Bananas Foster French Toast is guaranteed vegan.

As for connection, Delynda, who has always been drawn to the front of the house, says she “loves creating an experience for people that is different from what you typically get.”  And she rises to the challenge of convincing her people to believe in her approach to hospitality.  “I love to train, coach, and get them enthusiastic…I get super-nerdy about food.”  Kim, our relaxed, but knowledgeable and friendly server, is a longtime team member and testament to Delynda’s infectious leadership.

Though I enjoyed the patio table seating on the temperate June evening I dined with fellow-foodie Sheila Giolitti, in the lounge, a long narrow 18-person Community Table with backless stools helps facilitate the kind of experience Delynda imagined for her bistro.  “I was very deliberate about that,” she notes, as she wanted people to be able to slide in and out and “be able to interact.”  She is proud of the fact that they still have customers who met at Civil noting, “That’s the culture I was trying to create.”

This bistro serves up creative cocktails and cuisine, connection, culture, and civility for the quintuple win.