RESTAURANT NEWS: A Gateway to India 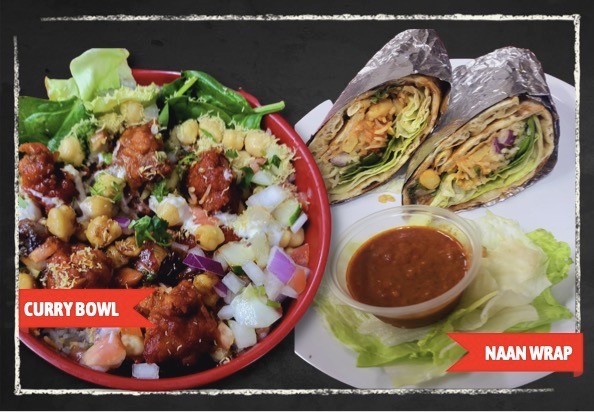 Paul Chhabra, the civic-minded, seasoned restaurateur who’s been broadening Hampton Roadsters’ palates with biryanis, bharthas and basmati for over three decades, is pulsing with boyish energy early this morning as he pulls up in a U-Haul to a storefront at Chesapeake’s Crossways Shopping Center.

It’s the site of his newest enterprise, Rajput Indian Eats. Some of the equipment on order had hit one of those inevitable supply chain snags, and, anxious to open as soon as possible post-Labor Day, he’d gone and picked up the goods himself on a 90-something-degree summer’s day.

He hands me a press release that explains in the stilted language of press releases: “Rajput Indian Eats mission is to serve Indian cuisine in an approachable way for American consumers by utilizing formats that are recognizably mainstream.” Then he goes on to affably explain with his beguiling lilt, “I was tired of hearing people say they were afraid to try Indian food because it’s too spicy.”

He also wanted to reach those too intimated to go to one of his two full-service Rajput Indian Cuisine restaurants (hospitably run in Suffolk by his wife Kiran and in Norfolk by his son Nipun) unless they had an experienced friend to sherpa them through a menu of potentially unfamiliar dishes.

So, stripping away the splendid trappings of those well-established restaurants, this latest addition to the family business is fast-casual. Chhabra still insists on top-quality ingredients prepared in an attractive environment (natural wood walls accented by the colors of the Indian flag: saffron, white, fertile green), but you’ll order at a kiosk or the counter – perhaps from a QR code in your car – and your food will be brought to you. Afterwards, bus your own table. Panera-style paneer, if you will.

He rebuts the “scary spice” promulgaters by noting the many mild dishes throughout India’s varied regions (hello, butter chicken, for starters). And Chhabra presents an array of options – meat-rich, vegetarian, vegan, gluten-free, halal – representing not just the major northern and southern divide, but the subcontinent’s distinct states and the lands once encompassed by ancient India. So along with tandoori (clay-oven-roasted) chicken, emanating from Punjab (Chhabra’s homeland), and vindaloo, a Portuguese-inspired curry dish from Goa, Rajput Indian Eats offers Afghani kebabs, Nepalese momos (dumplings) and a goat stew popular in Lahore.

By serving them in this express way, Chhabra hopes more people will be game to taste these flavorful, fragrant foods. He even developed his own online takeout and delivery software called GrabKnock (“Get it, grab, knock,” he says while excitedly acting out each word to highlight the aptness of the name), born of his frustration with the system he had been using for his restaurants. Customers can still use platforms like DoorDash, Uber Eats and Grubhub for all the Rajputs, but with GrabKnock, there’s no upcharge.

He puts customers in the driver’s seat further by allowing them to direct the composition of curry bowls (start with a green or a grain, pick a main such as chicken tikka masala, top with vegetables – maybe cucumber, red onions, jalapenos and/or sweet corn –  and a sauce from mild like tamarind or mint chutney to hot and, finally, select garnishes including fried onions, cilantro and chickpea noodles) and kathi rolls (begin by choosing your bread –  roti or naan – then a green or a grain, a main such as lamb seekh kebab, and then the same vegetable toppings, sauces and garnishes as for the curry bowls).

There’s a plethora of traditional street foods (delineated as small plates) including samosas, potatoes, and a vegetable naan pizza. But if you’re looking for a full meal, you’d go for the thali (also called platters) that incorporate a main dish, vegetables, legumes and dessert.

The Americanization of menu items is notable. Kathi rolls are likened to wraps, and under beverages, where hot or iced coffees and chai teas can be accented with cardamom, cloves or cinnamon, a lassi (delectable in mango or guava or litchi) is listed as a yogurt shake.

Such Duolingo-ing of food in the United States is on trend and the subject of a recent Washington Post article pitting purists who complain that such wordplay can lead to skewed depictions of international cuisines against latitudinarians who posit that it helps speak to a wider audience. Would rose water by any other name smell as sweet?

Chhabra diplomatically navigates the choppy nomenclature seas by using his menu to explain and suggest and, in so doing, bridges a gap, balancing both sides. Ultimately, Eats is all about ease. It’s also committed to sustainability, eschewing Styrofoam for recyclable and reusable containers, employing energy star appliances and featuring sensor/touchless restrooms.

Chhabra shares that Rajput India Eats’ grab-and-go set up could be a launching pad for his cloud kitchen concept and a virtual franchise restaurant model for a range of fast-casual South Asian eateries such as Punjabi Eats, Himalayan Eats or Vegan Eats. I sense he’d love to chat about it all day, but he’s got a plane to catch. He’s headed to South America and Latin America; seven cities in seven days. Ostensibly a vacation, he’ll no doubt wind up conducting Indian culinary demonstrations at every stop just as he does whenever he travels. Always in consultant mode, he wants to help other restaurateurs grow. “It’s my passion,” he says. “Or destiny.”

1412 Greenbrier Parkway, #135, Chesapeake. Tel. 757-222-2888. rajputonline.com. Grand Opening after Labor Day with specials including a free curry bowl with drink purchase and $10 gift certificate for future dining. Menu still being drafted at press time, so changes may occur, but most items anticipated to be $9.95-16.95.