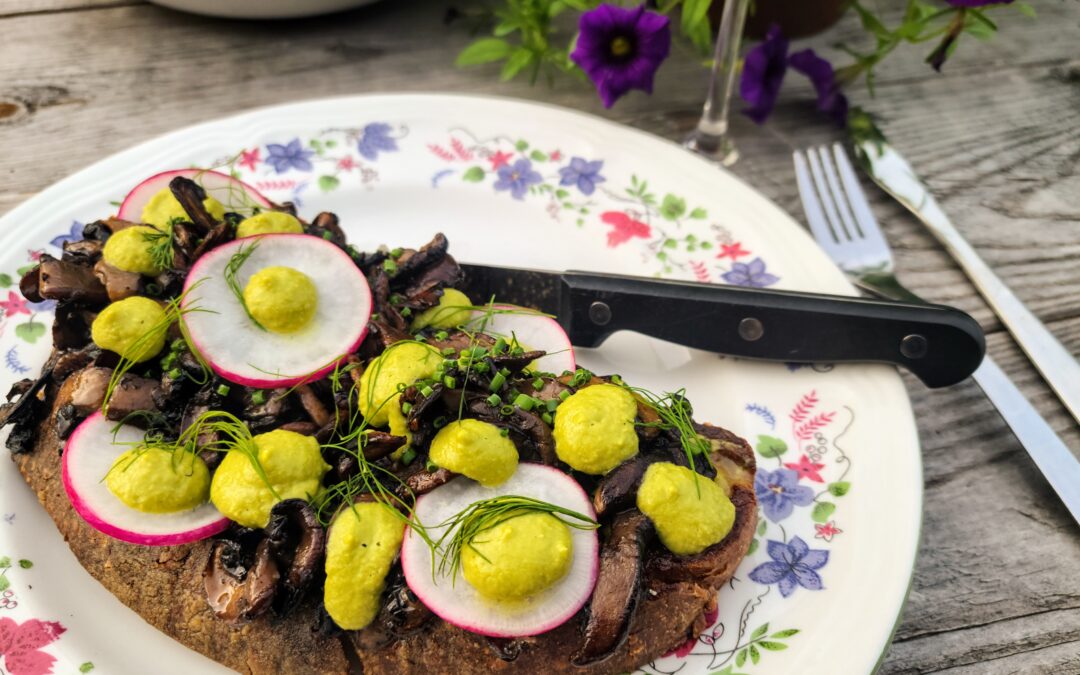 “I’m not gonna write you a love song

‘Cause you asked for it

‘Cause you need one…”

Nope, like alternative pop artist, Sara Bareilles, lilts, “I’m not gonna write you a love song ‘cause its make or breaking this.”  Why?  Because Virginia Beach’s new-ish restaurant, Love Song, open since August 2021, has already made it, with word of mouth and social media posts spreading the love.

It would be so tempting to lapse into music metaphors to describe this unique eatery—harmonious food and wine pairings, servers who never miss a beat, etc.—but this establishment deserves better.

The June evening my gardening gourmand friend, Sheila Giolitti, and I visited was unseasonably mild for coastal Virginia, the fading daylight taking on that silvery blueish-pink tone that feels wistful and nostalgic, but ripe with promise, not unlike stepping into Love Song.  So, though the dining room and bar beckoned, a casual picnic table on the front patio called out more insistently.

Tucked into an up-and-coming neighborhood on Laskin Road between Arctic and Pacific, the area has yet to be named, but exudes its own easy walking-biking-skateboarding ambiance.  The restaurant interior boasts a bohemian-boho vibe with an industrial edge appointed with appealing art and infused with a cool soundtrack.  Says Hill, “We’re all heavily into art and music.  Though we like to keep everything very simple, there is lots for your eyes and we’re always adding and updating.  It pairs with our food and beverage.”

In the back of the slim storefront, past the convivial-but-nothing-crazy bar and open kitchen, is a hip, minimalist space that was, when the restaurant first opened, a “full-on wine shop which is built into the restaurant now.”  But it will soon be its own separate wine bar, a “much more casual spot for a drink and a couple of snacks.”

Sheila’s and my experience, from greetings to farewells, felt warm and unforced, friendly, but not in that “Hello, my name is so-and-so and I will be your server” kind of way.  Sommelier and general manager, Brittany Herlig, who trains the front of house staff—a quartet of bartenders and trio of servers (sorry, I couldn’t help myself)—clearly knows about more than just the exclusively biodynamic wines served here.  The team is serious about relaxed hospitality.

They are also committed to fresh, wholesome ingredients that are somehow elegant and almost ephemeral in appearance but vibrant and intense in flavor.  Food here looks and tastes lighter and brighter.  Perhaps it is because “farming is the backbone of everything we do here,” according to Hill.  I recently caught up with him between frequent menu changes to learn more about this rare pearl of the oceanfront dining scene.

Claiming that he and chef de cuisine, Jake Heller, are “simple cooks,” he emphasized that they “let the ingredients do the talking,” avoiding any one culinary direction.  So, don’t be fooled by the small shareable plates: this is not a Spanish tapas spot.  But, similarly, don’t be fooled by the term “simple;” these dishes are deceptively so.

Says Hill, who settled here after a tenure at RVA’s storied Heritage and “hopping in and out of kitchens” around the country, “Our main focus is making sure we’re dealing with the local farms and local fisherman.”  He and Keller write their manageable-sized menus according to what comes in, changing some four to five items every week.  “This presents more of a challenge; we are always thinking and always on our toes.”  It is also more enticing for diners.

Not a vegan restaurant by any stretch, I will nonetheless go back for a handful of vegan-friendly offerings that are “clean and focused,” not unlike Hill’s description of their wines, for which I will also return.  Hyper-seasonal, a plant-based dish gracing the menu in May was sugar snap peas with ginger, ramp vinegar, basil mint, and benne seeds.  Earlier in June, another was local roasted summer squash with mustard green kimchi, chili glaze, and peanuts.

On the evening we “pulled up,” as the staff likes to say, “I started with a bowl of warm, plump, oil-slicked olives, redolent of chili and citrus.  I was so smitten with the flavors and aroma that I recreated the dish a couple of weekends later for company.  For dinner, I chose the mushroom tartine, a rich umami affair of pungent, toothsome, soy-soaked mushrooms atop a perfectly crisped piece of toast.  Polka dots of pea puree over the top were a pretty pastel green, both whimsical and tasty, set off by the slightly peppery crunch of impossibly thin radish shingles.  This and every dish that emerged from the kitchen looked as much like an abstract painting as dinner.

With many, if not most, businesses of all kinds decrying the near impossibility of maintaining their staffs, at Love Song, Hill reports little to no turnover.  Instead, he declares, “Our team is almost entirely originals since Day 1.”  It’s no wonder.