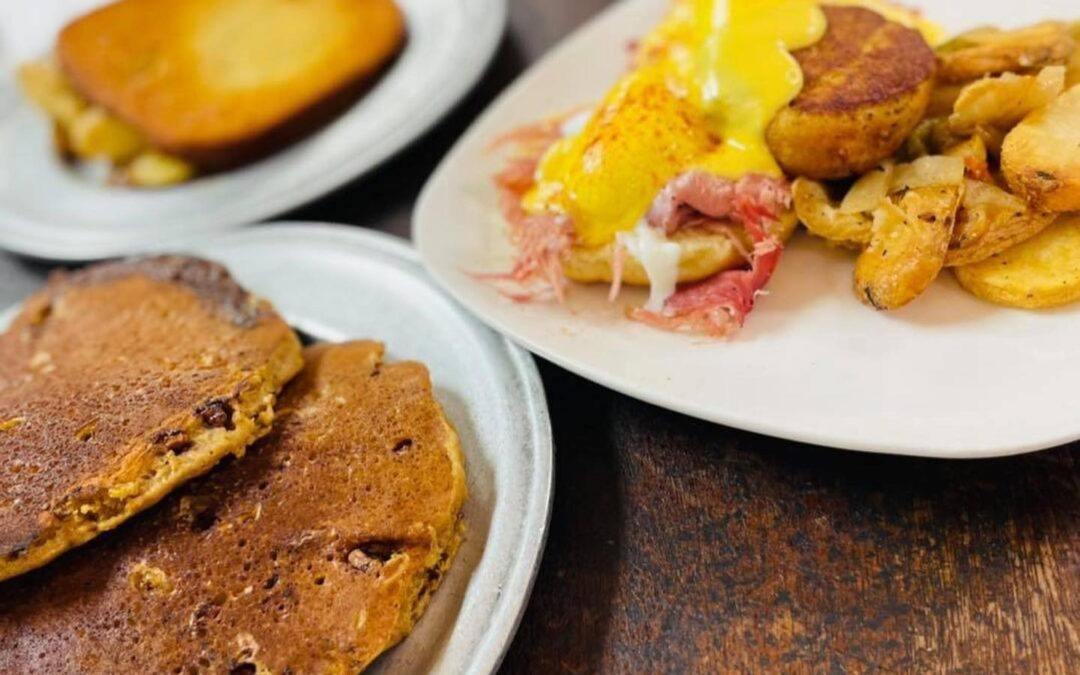 “That was really tasty,” said Phillip Epstein as he and his wife Dana exited The Grey Goose Tea Room in Downtown Hampton. “But I don’t need to go back again.”

The year was 2007. He was head baker at Colonial Williamsburg, she was an executive chef with Compass Group. They had just moved into their new house and were unpacking boxes. When they took a break, Dana, who grew up in Hampton, thought it would be fun to introduce her husband, a Norfolk native, to the eatery a half mile away that held a special place in her heart.

When she was a teen, she’d sneak away from Kecoughtan High in the middle of the school day for Grey Goose’s Brunswick stew. The cafeteria and physics class couldn’t compete.

As much as Phillip enjoyed it, he deemed the place old-school, a destination for ladies who used to lunch after shopping at Leggett’s. Not his cup of tea.

But soon after, Dana was flipping through a newspaper and saw an ad for a restaurant for sale. She called the broker who made her sign a nondisclosure before divulging the name. “When I heard it was The Grey Goose, I couldn’t believe it,” she remembers. “I called him right back and said I’m off at three, I can be there by four. Don’t show it to anybody else.” By the end of its first day on the market, they’d bought it.

“I’m a bit impulsive when it comes to a lot of things, I guess,” she admits. “I thought why not? We’ve got the training, maybe now’s the time.”

Fifteen years later, the restaurant pushing 40 (legitimately earning its “Grey”), the Johnson & Wales University graduates have made it their own, keeping the memories, modernizing the menu and milieu.

Before it was The Grey Goose, though, it was The Shoe Box, a shoe store where Dana, once an aspiring dancer, picked out ballet slippers. “In the closet there’s still writing from there with sizes for specific customers,” she says. “I snapped a picture and sent it to girls I knew in the ballet company with: ‘How many Cynthias and Sarahs were there? I wonder if that’s you?’ It’s like a time capsule.”

In 1982, it debuted as The Grey Goose Tea Room, owned by P.D. and Barbara Jones, and Barbara’s sister, Donna Catlett. Dana, 13 at the time, lived next door to Catlett in Poquoson, deepening her ties to the place.

“We never really understood, though, why they called it a tea room,” says Dana, noting they didn’t do finger sandwiches or serve high tea. Goose in the name, however, was a definite nod to nursery rhymes, and menu items included the Henny Penny salad and Jiggety Jogg sandwich.

Recognizing they possessed a community treasure, the Epsteins made no major changes to the Goose at first. “When we did make menu changes, it was nothing crazy,” she explains. “But we’ve evolved through the years; as flavor profiles changed and people’s wants changed.”

Six months in, for example, The Goose and the Garden, a so-80s-ish sandwich of raw green peppers, mushrooms and cabbage on pita, graduated into roasted vegetables on lavash. Now there’s a Beyond Burger. “But the Brunswick stew’s not going anywhere,” says Dana.

Nor the buttermilk ham biscuits.

In fact, even as they contemporize the cuisine, the Epsteins reinforce its roots. The drawl might not drip as treacly as in the tea room days, but they are defining the Goose as casual Southern, highlighting blue crab soup, deviled eggs, fried green tomatoes, pimento cheese and perennial chess pies.

Reframed as a restaurant, bakery and caterer, they added dinner and brunch along the way as well as wine, beer and cocktails. The brunch business is particularly brisk, replete with sweet potato praline pancakes, stuffed French toast and avocado toast with smoked salmon. Shrimp and grits, on both the brunch/lunch and dinner menus is perhaps the hottest seller of all.

Now, befitting many a 40-year-old, Goose is getting a facelift. The Epsteins are redesigning the layout for better flow and introducing a brighter, fresher palette of periwinkle blue, gray and teal.

But she understands where they’re coming from (heck, that Brunswick stew is her Proustian madeleine). “Because of the age of the restaurant, we’ve got so many demographics that have so many memories. Older people will always see it as the tea room and young people who came in for Breakfast with Santa, that’s going to be their memory.”

Tuesday trivia nights and Friday buy-one-get-one-free prime rib have energized a whole new fan base, along with live music on weekends and wildly-popular Drag Dinner Shows every first Saturday.

In 2021, Goose got a sibling when the Epsteins opened the French-inspired Baker’s Wife Bistro+Bar in Phoebus. The name embraces both of them while keeping in the nursery rhyme-fairy tale realm and alluding to Phillip’s pastry prowess.

They’ll be throwing a party at The Grey Goose weekly to celebrate the 4-0 milestone (see box). As it heads toward another decade, it’s clearly no longer your grandmother’s Goose, but biscuits and Brunswick stew and lemon chess still hold sway. As Dana says: “They’re the soul of the business.”

To celebrate its middle-age milestone, The Grey Goose is hosting “40th Birthday Parties” every Saturday night starting May 21 with special discounts and a cupcake to anyone else born in 1982 (ID required).