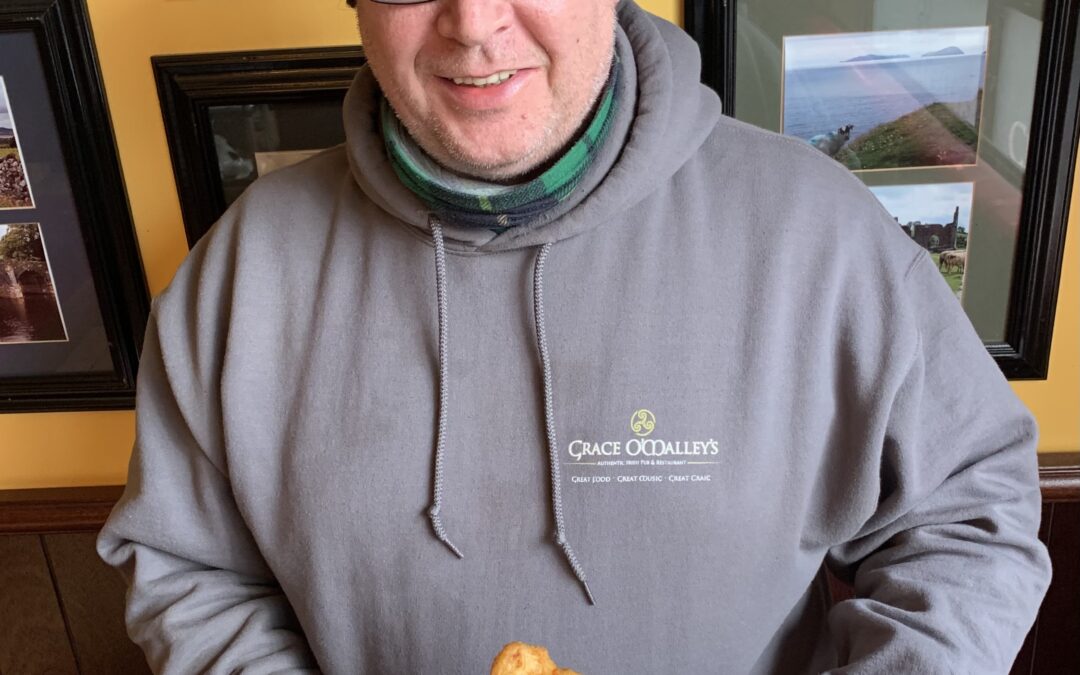 Local pubs serve fish and chips and other traditional dishes

There may be a friendly rivalry between the Irish pubs of Hampton Roads, but they all agree on at least three things: Their patrons love fish and chips, Guinness, and Jameson.

Veer Magazine checked in with three establishments—Celtic Tiger in Chesapeake, Grace O’Malley’s Irish Pub and Restaurant in Norfolk and Murphy’s Irish Pub in Virginia Beach—to find out what makes their fish and chips special—and their other food and drink offerings unique.

Celtic Tiger, which opened in late 2019—just before the COVID-19 pandemic—serves battered pollock with homemade tartar sauce and seasoned potato wedges. What sets their dish apart is quality.

“I think the reason most Irish cuisine in America is looked at negatively is because people just don’t do it right,” Geoff Fout, the pub’s owner, said. “They do it secondary. They open an Irish-themed pub, and their food is always second. Well, our food always comes first. I think that’s the big thing. It’s just about caring about what you do in quality.”

Celtic Tiger may be the only pub in Hampton Roads—if not all of Virginia—that serves “boxtys.”

Fout described a boxty as “the Irish version of a Mexican burrito or an American wrap” but added: “Honestly, there’s a lot of Irish people that don’t even know what a boxty is.”

Celtic Tiger is located at 759 N. Battlefield Blvd. in Chesapeake.

“We really spend a lot of time and labor on those chips,” owner Christy Marron said. “I have helped prep them myself many a morning. Every potato was peeled and then hand-cut and then fried with a special kind of seasoning on it.”

Other popular dishes include bangers and mash, shepherd’s pie, and cottage pie.

“They’re made the same, really, except for the different meat,” she said. “It’s got peas and carrots and onions … in our Guinness brown gravy and topped with mashers. We offer both because a lot of Americans don’t have a taste for lamb.”

Marron’s favorite menu item is Scottish—the “drunken salmon”—but it has an Eire flair in that it’s served with a house-made Paddy’s Old Irish Whiskey sauce.

Grace O’Malley’s is located at 211 Granby St. in Norfolk.

The beer-battered Icelandic cod at Murphy’s is served with house-made cole slaw and “bottomless cottage fries.”

“They’re essentially a round-cut fry,” manager Lindsay Thibault said. “They’re called that because they look like the shingled roofs on little cottages.”

Murphy’s has a long-standing tradition of preparing and serving its stew to every runner in the Shamrock Marathon every March.

“We get friends and family members that help us every year,” Thibault said. “They call themselves ‘Stew Crew.’ Thank goodness for them because we’re all busy up here in the restaurant.”

Murphy’s is located at 2914 Pacific Ave. in Virginia Beach.

The three pubs we queried all have Irish staples like Guinness, Harp and Smithwick’s on tap, but there are a few differentiators in their selections. Celtic Tiger carries Guinness Blonde and other “alternative” offerings from Guinness’ Open Gate Brewery in Baltimore; Grace O’Malley’s carries Magners Irish Cider and an exclusive Irish Red Ale made by Pleasure House Brewing; Murphy’s carries Kilkenny Irish Cream Ale.

They all take the requisite steps to serve a “proper pint” of Guinness.

“We work very hard on teaching our bartenders how to pour and present a proper Guinness,” Thibault said. “It takes 120 seconds to properly pour Guinness, and it’s done in a two-step process. We do take a lot of pride on serving a proper pint.”

Marron added: “We always tell someone if you’re in a hurry to get a drink, don’t order a Guinness. We’re not going to rush it; we’re going to make the perfect pint every time.”

One last thing the pubs have in common: Virginia’s ABC and supply chain issues are making it difficult to keep Jameson and other whiskies in stock.

“We have over 25 Irish whiskies,” Fout said. “I’m not going to say that we’re able to keep all of them in stock at this point in time … but us entrepreneurs, if you’re a customer and you want something, we’re going to do our damnedest to get that product in.”