Chef Jae in Your Kitchen 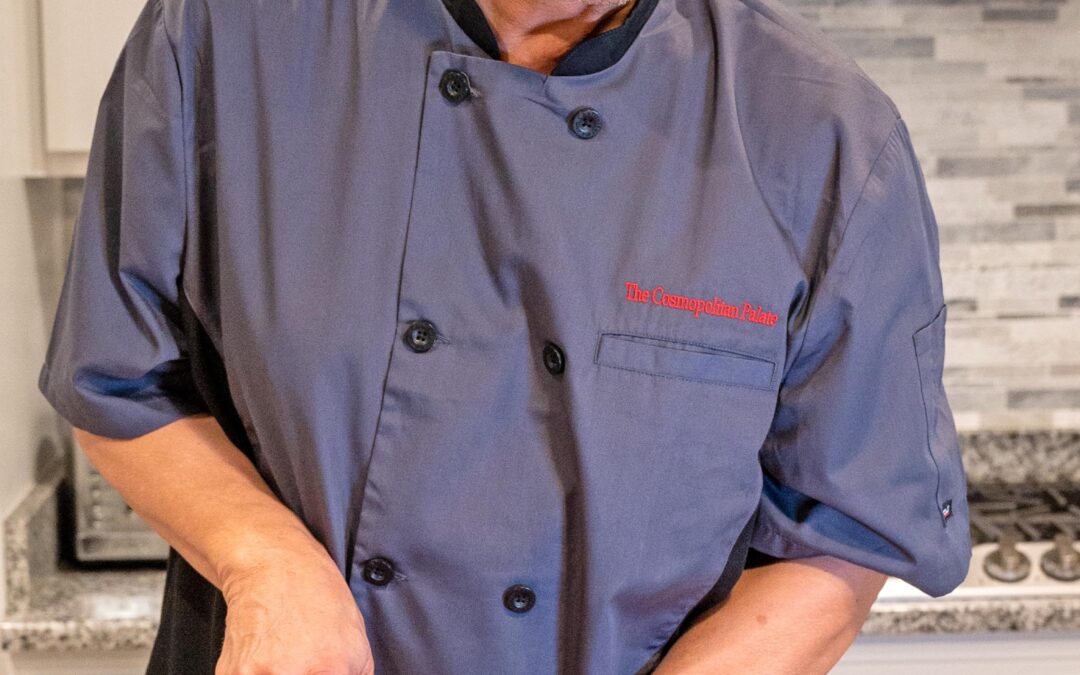 (Jae Sinnett prepares everything from scratch in your kitchen. Photo by Mark Robbins

Let’s say you enjoy the good things in life and within your social circle are likeminded friends who equally appreciate the sounds of jazz, savor a select bottle of wine, and have a passion for artfully crafted cuisine.

You’ve completed a rotation of dinner parties with your preferred comrades in sophisticated culture. At one, your pals Bill and Cathy wowed all eight invitees when they donned aprons and cooked supper themselves from a recipe shared by everyone’s favorite chef in downtown Norfolk.  At another, David and Susan had their generous dinner catered by a long established company with a staff of cooks and servers.

Now it’s your turn to host. You want to dazzle and offer something different with a built-in surprise. You have become aware that a local celebrity has taken his love of cooking to the next level by starting an in-home fine gourmet cooking company called The Cosmopolitan Palate.

With a quick inquiry, you’re instructed to visit the website www.thecosmopolitanpalate.com to book your date and time. There’s also a recommended menu for two, three and four course meals for up to 10 people.

Beyond the recommended offerings, seasonal menu entrees are available and special requests are considered.

For your dinner party, you’ve decide to order off the menu after a request for seared duck breast over wilted spinach with hand-sliced cherries on top was agreed upon. Duck, after all, can be a challenge to cook to perfection, and this will impress your friends.

The chef/owner from The Cosmopolitan Palate arrives at your home at 6 PM. He brings all of the necessary cooking pans, utensils, cutting boards, and ingredients.  Everything is prepared from scratch right in your home kitchen. The only stipulation is that the chef not be distracted with conversation as his focus is to prepare a meal you’ll be discussing for weeks ahead.

Dinner will be served promptly at 8 PM, but several appetizers make their way into your living room by 7 PM as your guests arrive.

Over a few bottles of Caymus Cabernet Sauvignon are shared amongst conversing friends, the question comes up — “What’s for dinner?”

“Funny you should ask,” you reply. “Let’s all move to the dining room.”

As everyone takes their seat, out of the kitchen walks Jae Sinnett to the surprise of all.

“While we were all socializing in the living room, Jae was busy preparing tonight’s meal with a little improvisation here and there,” you tell them.

Everyone applauds, oohs and aahs in admiration.

Jae Sinnett, as most people in Hampton Roads know, is a local celebrity. Sinnett is an internationally known jazz composer and drummer with over ten studio recordings to his credit. His Jae Sinnett Trio’s critically acclaimed “Altered Egos” album climbed to #5 in Jazz Weekly’s national radio play list last year.

In addition to being a musician, he has been a familiar voice on local public radio affiliates WHRO-FM/WHRV-FM as programming host of Sinnett in Session (jazz) and the R&B Chronicles.

During fundraising seasons, Sinnett has cooked dinner for a small group of major donors to the station as a way to say thank you.  Over time, Sinnett hatched the idea of launching a side project/business incorporating his celebrity status and love of cooking. In January, he officially launched The Cosmopolitan Palate, putting his drum sticks down and picking up a spoon and chef’s knife on non-gig nights.

“I’m simply following a path I’ve been on for the past 10 years,” said Sinnett. “Now I own my business that follows the same concept. On my “Cooking with Jae” show on the WHRO Public Media Facebook channel, I cook menu items available from the Palate. The show also offers folks an opportunity to see me do what I do — cook. Cooking has always been a passion and now it’s a profession. I want to be the best chef for my concept of the business. I have a vision for the food I want to cook: Sophisticated Americana with world influences. A touch of the familiar with the new…all offered with deep flavor profiles and variation.”

Sinnett first admired the art of cooking observing his grandmother.

“For as long as I can remember my grandmother was my favorite cook,” said Sinnett. “She was born in Florence, South Carolina, so she was a traditional Southern cook, and I’m not saying this just because she was my grandmother — the best chicken and dumplings; the best collard greens; the best smothered pork chops; the best green beans with ham-hock. Classic Southern-style cuisine.”

The US Navy brought Jae Sinnett to Norfolk in 1974. He then attended Key’s Business School followed by Norfolk State University where he majored in music. Cooking for himself was hardly an artistic expression.

“I didn’t have any money back then,” he said, “so I ate cheaply. At first, cooking was about surviving.”

That soon changed for Jae Sinnett as he began to cook a particular dish to parallel a new song he composed.

“Then cooking became an art,” Sinnett said, “and about health, understanding nutritional value.”

Sinnett said he put in the work to excel as a musician and has applied the same dedication to his development in the culinary arts. He finds the process of preparing the ingredients and cooking as intellectually stimulating as composing a new tune and performing it in concert.

“I’m an artist so my natural inclination is to create things,” said Sinnett.

Chef Jae is how he prefers to be called when he’s behind the stove instead of the Sonar drum kit. He’s fully vaccinated and boostered. In addition to cooking in your kitchen, he can deliver fully prepared meals to your doorstep within a 30-mile radius of his home in Carrollton, just minutes from Hampton, Newport News, Suffolk, Portsmouth, Chesapeake, Smithfield, and Norfolk.

Want to impress a group of friends, have a memorably romantic at-home dinner date, or if you’re still on-guard about the ongoing pandemic, gourmet dinners by Jae are the way to go. You can even let Sinnett pick the menu items and see what he drums-up.

And for a premium, the Jae Sinnett Trio will set up in your living room and serenade you and your dinner guests for an unforgettable night.