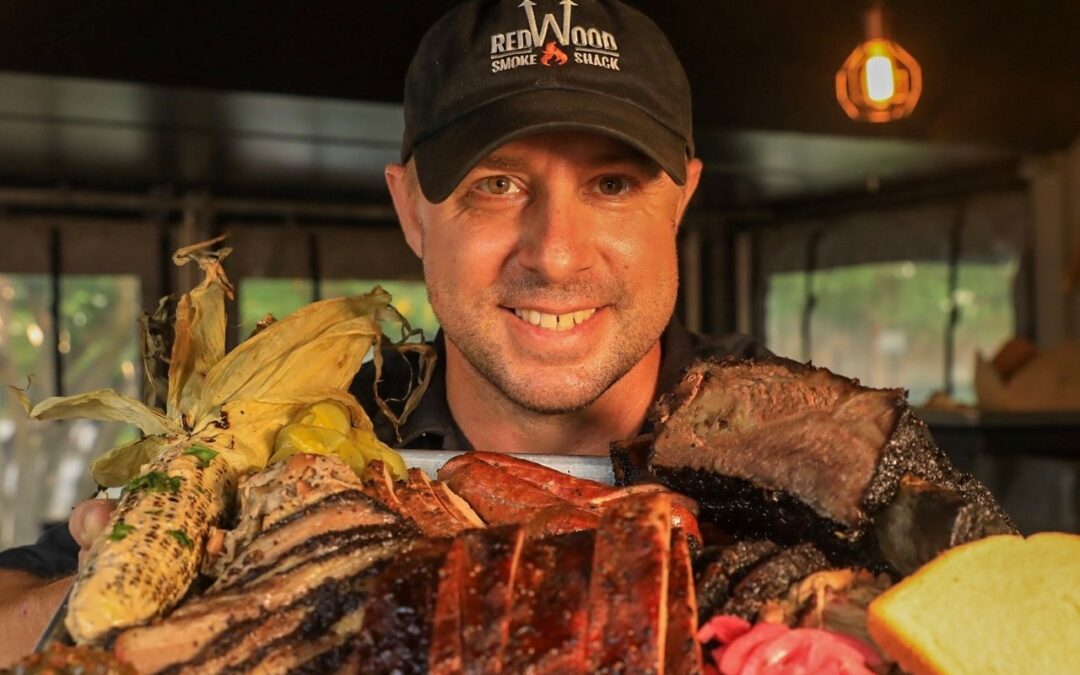 Some of our favorite homegrown eateries are expanding – opening a new location, introducing a new concept – making us clamor for seconds (and thirds and more!).

Bob Roberts encountered a dilemma at the DMV. A form he was filling out regarding his Mercedes Sprinter asked: Color? The man with a Mensa-level BBQ IQ whose swashbuckling pleasure in barbecue led to exhaustive research, near-religious, cross-country pilgrimages to legendary pitmasters and the founding of Redwood Smoke Shack, first as a food truck in 2017, followed by a permanent home in Ghent two years later, pondered: “Can I put down meat?”

See, every inch of that van is plastered with Redwood’s logo, the flames and food that make it famous in these parts: beef brisket, pulled pork, smoked turkey. The license plate even reads Meat Wagon.

It’s an attention-grabber, for sure, but the vehicle is also his ticket to branching out to a second brick-and-mortar, unveiled over Memorial Day Weekend at the Courthouse Marketplace in Virginia Beach. He’d been fidgeting to launch a new venture for a while, but fretted over how to maintain the quality and consistency of his Texas-inspired ‘cue. The solution: handcraft the items in Ghent (he’s far from maxing out his three live-fire offset smokers named for his beloved dogs Bubba, Daisy and Stella) and deliver them to a storefront via the “Meat Wagon.”

So the menu at the Beach is identical, even if the space isn’t a carbon copy. While the Ghent standalone, encased in cedar, gives off a shack vibe, the newbie is part of a Harris Teeter-centered strip mall whose brick matches the colonial-style Virginia Beach Municipal Center across the way. But one foot in the door, it’s Redwood all the way.

There’s the map where you can push in a pin indicating where you’re from while you wait in line to place your order at the counter, which was created in the image of the still-rolling, original food truck. Behind it, the hard-working, dedicated staff exude a shared passion for product that makes you think barbecue sauce is thicker than blood.

Walls are slathered in colorful graffiti emitting urban energy. In the center of one is the Anthony Bourdain quote: “Barbecue may not be the road to world peace but it’s a start.”

So start with brisket (be ready to specify lean or moist, the latter if you’re going for flavor and don’t flinch at fat) or big-as-your-forearm ribs or a pulled pork or chicken sandwich (perhaps dolled up with pickled onions and pimento cheese) or burnt ends (aka brisket candy) or a daily special. Pick your sides; they too are high achievers. Cole slaw is sassy with cilantro, green chilies notch up the mac & cheese. Of the pit-smoked beans, Roberts’ wife Lindsey says, “They’re definitely not your warmed up out of the number 10 can baked beans.” Indeed, they’re a palate-sparking, complex, humdinger of a medley. 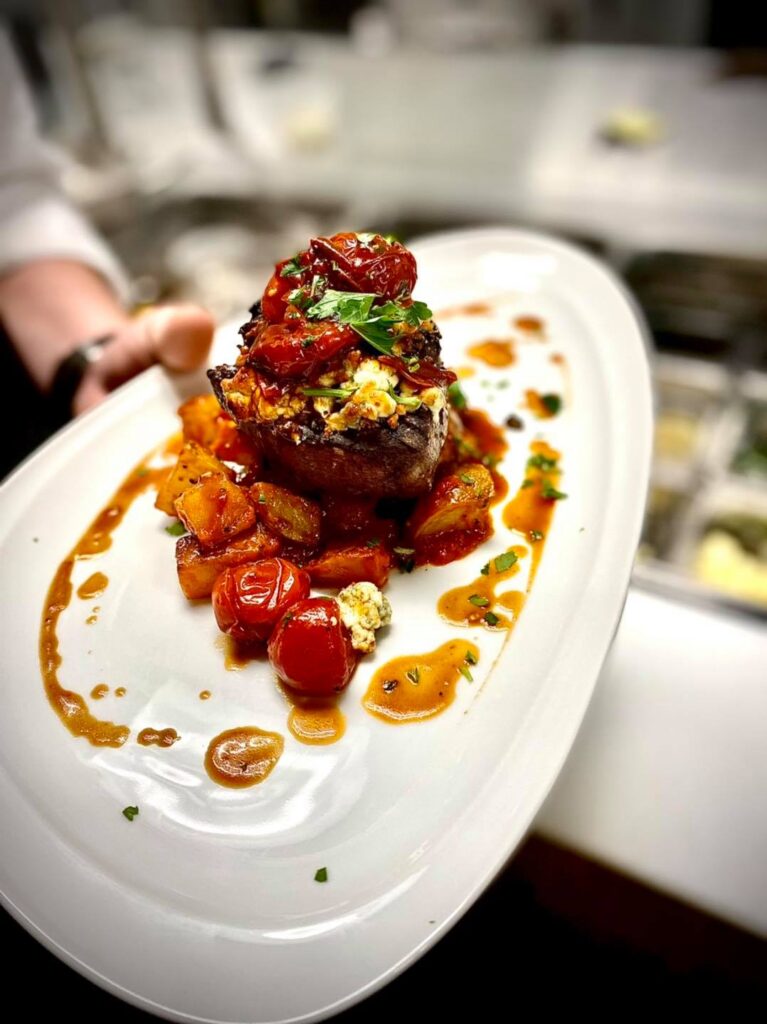 (Ergo Amedeo’s Ristorante and Baker brings the cuisine of northern Italy to north Suffolk. Pictured is their 8oz. Filet Tenderloin, crusted in black garlic and Gorgonzola cheese, smoked tomato and finished with our veal Demi glacé. Photo courtesy of Amendo’s.)

Brian and Teresa Mullins’ M&M Hospitality has been putting Suffolk on the culinary map for 15 years starting with Vintage Tavern (gourmet Southern), followed by River Stone Chophouse (classic raw bar and steakhouse) and Decoys (seafood). As they planned their next venture, Teresa shares they sought another distinctive, wide-appealing cuisine and, while mulling options, had an epiphany: “With the strong ties that bind Suffolk to Italy, it was staring us right in the face!”

Ergo Amedeo’s Ristorante and Bakery, opened this spring, lionizing Amedeo Obici. The Italian immigrant personified the American dream by founding Planters Peanut Company and cultivating Suffolk by building Planters’ first mass-processing plant there in 1913. “Amedeo paid his success forward by making his community a better place than he found it,” says Teresa. “We want to emphasize that through our photo vaults and our private dining area dedicated to Amedeo’s life and passions.”

Through the menu, too. Executive chef Travis King spent months researching and developing recipes linked to Oderzo, Amedeo’s birthplace near Venice (and Suffolk’s sister city), inspiring such as pan-seared salmon Obici with Planters peanut pesto, roasted green apples and golden raisins. Pastas, including spinach ravioli, tagliatelle and lasagna, are made on premise.

The gracious hospitality that filled the home Amedeo and his wife Louise made nearby (today known as Obici House, a special events venue) prevails at this new namesake with wines and spirits aplenty. A portion of the proceeds from each greyhound cocktail supports actual greyhound rescue, which probably would have pleased the philanthropic Amedeo, given the charming photo of him in his bathrobe with his dog. Bronze greyhound statues are part of the restaurant’s décor, too, symbolic of an Italian aristocratic way of life.

Krafty in the Kitchen caterers Amy Higgins and Sean Kraft will ply their craft still more at Willoughby Fish House on Norfolk’s Willoughby Spit. Opening soon, they promise that along with fish/seafood there will be “…something for just about everyone from wings to burgers and even vegetarian dishes.” Spectacular sunsets accompanying all… Conceived by Aaron and Christine Holley at Munich’s Oktoberfest, Wasserhund Brewing Company debuted in Virginia Beach in 2015, instilling Hilltop with German beer culture. It’s also fostered community with pints and pizzas supporting many a fundraiser. Now a second Wasserhund is slated to open at Summit Pointe in Chesapeake’s Central Business District this August. Próst!