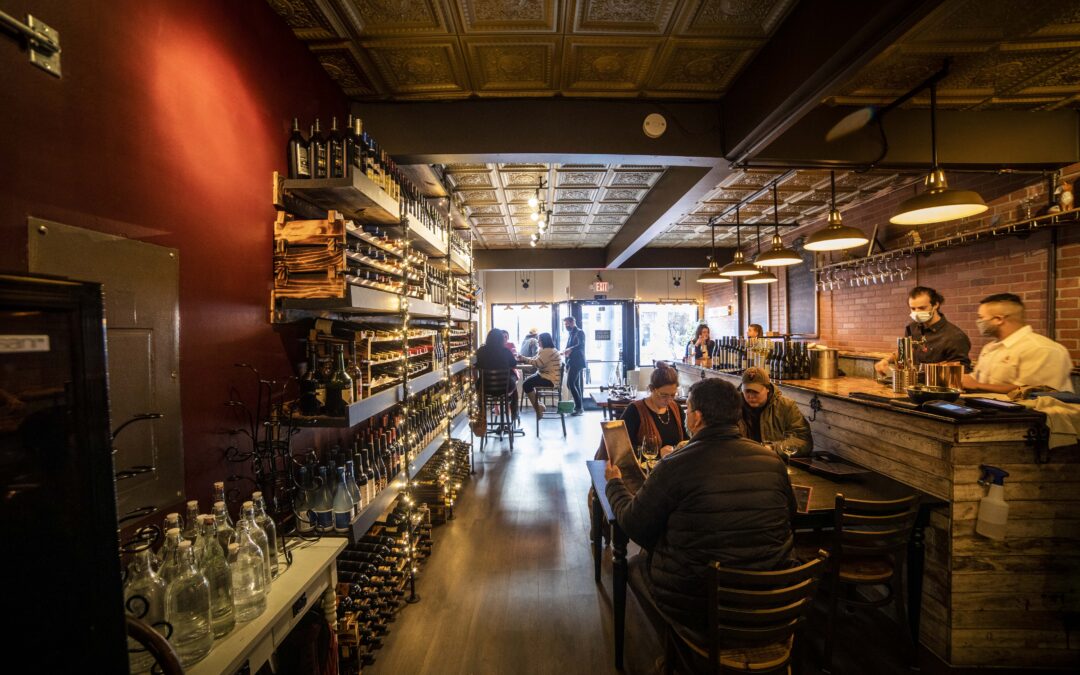 “I felt like the type of experience we’re offering did not exist in this neighborhood and there was an opportunity to bring something new, fresh and exciting to a community that was underserved,” said Fox Tail Wine Bar co-owner Justin Ramos. “I plan on fixing that problem.”

Fox Tail Wine Bar is one of the recent hotspots to open in the historic Phoebus section of Hampton. Fox Tail revamped its food menu and wine list in early February, taking things up a notch.

Bubbles for special occasions are popular and options vary between a $25/bottle of J. Roget Brut to the French Veuve Cliquet at $130/bottle.

Such a fine dining experience wouldn’t have been likely in Phoebus a few years ago, but the encouraging signs of a revitalized business corridor with its classic Americana small town charm is irresistible.

“Most of our main street includes buildings that are 100 years old,” said Toni Williams, Executive Director with the Partnership for a New Phoebus and Business Development Manager, City of Hampton Economic Development Department. “With revitalization has come some really unique renovations. An example of those businesses include: Fullers Raw Bar, The Hampton Event Venue, Baker’s Wife Bistro, Foxtail Wine Bar, Honey House Boutique, Mango Mangeaux, Sly Clyde, 1865 Brewery and the list could go on. Both developers and business owners have done a wonderful job of keeping that charm while also providing a more modern feel.”

The city of Hampton developed and adopted an official masterplan for Phoebus in 2013.

“Phoebus is broken into three zones,” explained Williams. “The Main Street district, PH1, is the zone that focuses the most on maintaining that original feel of architecture. Plus, the new apartment community “Monroe Gates” that recently opened, focused all of their attention on details that would make their new building fit in with the historic look and feel of the area.

“Phoebus has been fortunate to have several new businesses open in the last two months: Foxtail Wine Bar, Charlotte’s Cafeteria, Refuel Herb Bar, and Baker’s Wife Bistro. Work is currently taking place at a new location for Scratch Bakery, 21 East Mellen St. The owner of Scratch, Lashonda Sanford, was recently featured on the Food Network’s Holiday Baking Championship. She has two locations of Scratch Bakery, one in Newport News and the newest in Phoebus. While Lashonda loves her current Phoebus location at 36 E Mellen St, she is excited to have more space for tastings, seating for dining, expanding her menu and other exciting offerings that her current location cannot accommodate. Work is also taking place for a new salon — the Cutting Edge Salon — that will open at 11 East Mellen St. Those are two projects that are currently in the works and I can see many more in the future.”

In addition to being a popular spot for residents of Hampton and nearby Newport News, Phoebus is attracting people from the Southside and Williamsburg as well.

“Visitors and residents travel to Phoebus and experience its small town charm and exciting culinary adventures,” said Yuri Milligan, Director of Media & Community Relations, Hampton Convention & Visitor Bureau. “Phoebus is a great place to take a stroll and have dinner, a glass of wine, beer or cider and shop for antiques and other unique gifts.”

That is the new Phoebus in a clam shell.