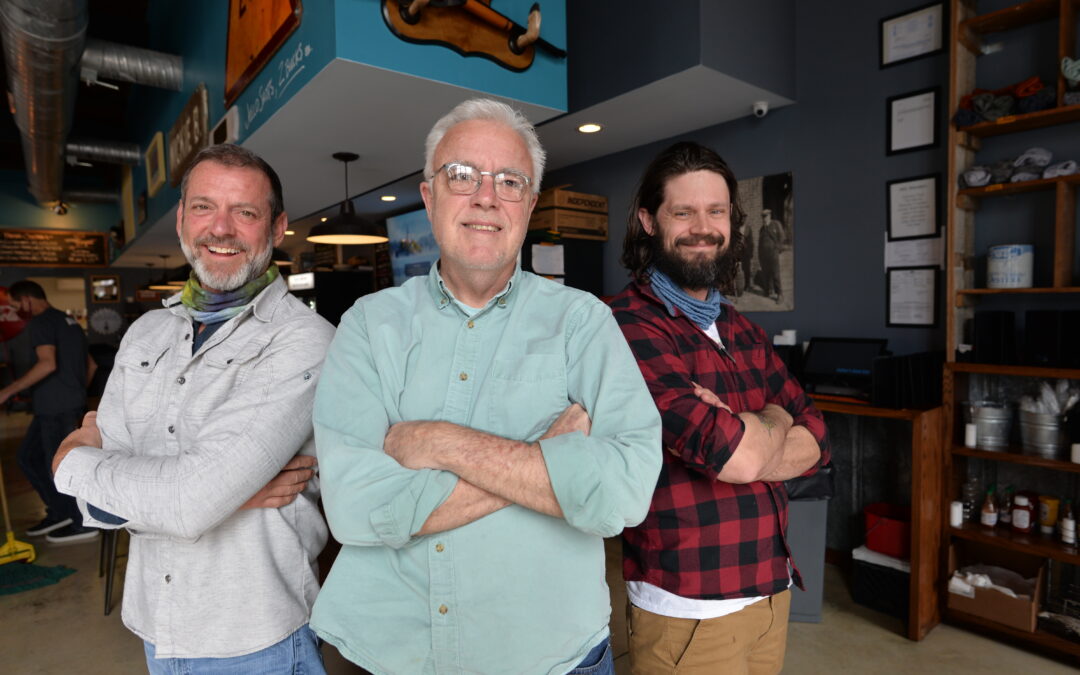 Phoebus is going to be the next Ghent.

That’s what local businessman/real estate tycoon Richard Levin has been saying for a few years now. He put his money where his mouth is by purchasing numerous buildings in the historic “main street” corridor (Mellen Street) of Phoebus.

Buildings aside, a true Renaissance requires buy-in from people and entrepreneurs eager to participate in a vision to bring life and vitality. One essential ingredient in this recipe for success — foodie culture.

That’s where longtime restauranteur Gary McIntyre and business partner Joe Illes come in, along with Pete Pittman who oversees menu layout and design for all of the restaurants. Together as the Tidewater Restaurant Group they have established a real foothold on the Peninsula with a simply delicious portfolio of dining experiences in Kismet Bistro at 99 Main, El Diablo Loco Cantina & Tequila Bar, The Deadrise, and Fuller’s Raw Bar.

These are exactly the kinds of places foodies seek out. They are destinations as individual businesses — meaning people will happily travel within an hour’s drive just to chow-down — but they also position cities like Hampton and Newport News as emerging culinary culture hotspots as a growing number of sought-out restaurants cluster together. Unique interior decor and savory inventive food must be paired to create an experience to stimulate all of the senses — and they nail it. 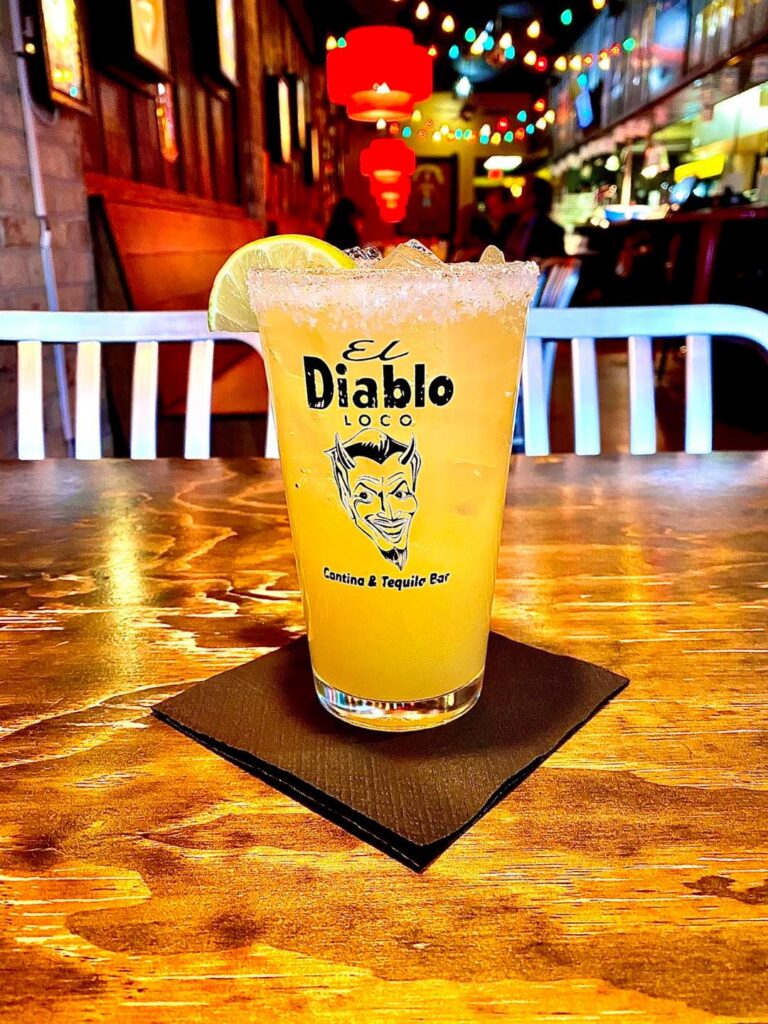 El Diablo keeps its food menu simple but with hearty portions and a focus on flavor combinations. Even items that appear familiar are transformative in taste. My go-to choice is the Big Bowl of Beans & Rice with chorizo (spicy ground pork sausage, $14). You have a choice of proteins that also includes shrimp, beef brisket, pork or chicken. There’s also a wide choice of Big Burritos ($16), Quesadillas ($13), Enchiladas ($13), Tacos, and an El Cubano Grande sandwich ($15).

On the beverage side, El Diablo has a wicked selection of tequilas and bright, fruity margaritas are a house specialty and massively popular. Wednesdays are officially Margarita Day (half-off). There’s also a wide assortment of Mexican sodas and south-of-the-border beers made in Costa Rica, Brazil, Guatemala, El Salvador, and Mexico.

A block away from Diablo in Fuller’s Raw Bar. Travelers often seek-out local dining establishments to taste the local flavor of a town or region. Many folks remark how few authentic local seafood dining options there really are in a region flooded with waterways — an ocean, bay, rivers, lakes and a swamp. Fuller’s was designed to fill that void.

From the exterior corrugated steel panels to the interior rustic, coastal vibe this restaurant says “local” in every way. 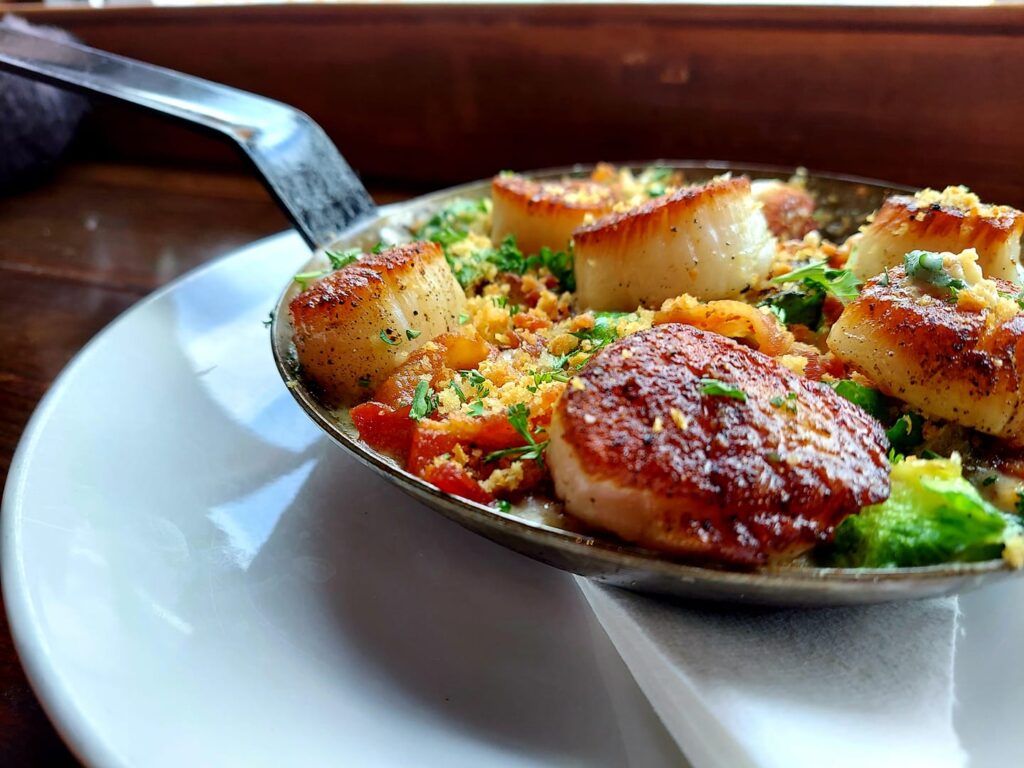 The quality seafood served at Fuller’s will make you proud to call Hampton Roads home. All the goodies are properly prepared and served where culinary art is sometimes best expressed in its simplicity. Juicy oysters in the half-shell harvested off of Gwynn’s Island, clam chowder using Middleneck clams with a Hatteras-style broth, steamed shrimp, steamed mussels — it is all on the menu either as individual preferences, in combos with shrimp, platters, sandwiches, and in the pan as jambalaya, fish tacos or the traditional fish & chips.

Less than a mile away on Fort Monroe is The Deadrise, located at the scenic Old Point Comfort Marina.

While El Diablo, Fuller’s and The Deadrise are in close proximity, Kismet Bistro at 99 Main is a bit up the road in the historic, charming Hilton Village neighborhood of Newport News.

Kismet is conceptually a different animal — a Southern American contemporary dining experience with all that you’d expect.

For Gary McIntyre this quartet of restaurants speaks to his lifelong experience in food and visual art — yes, he’s a visual artist too.

“The key is to make it impactful,” he said of his restaurants. “One of the things about this industry is being able to express myself through the canvas that is each restaurant.”

McIntyre’s first restaurant job was in the early 1970s as a dishwasher at Lake Wright Motor Inn/Dinner Theater. His first front of house job was as a waiter at the Lighthouse restaurant on Rudee Inlet in Virginia Beach.

“It was a great place to learn the position correctly,” said McIntyre. “Robert Herman owned the restaurant and he was one of the best operators that I’ve ever seen. In the ‘90s, I worked with Mike Atkinson and Corey Beisel at Bogeys, 501 City Grill and the Big Tomato. They’re partnership is one of the best I’ve ever seen and it’s still going strong. They were very good to me.”

McIntyre learned every step of the way and became the key ingredient in Ghent’s Wild Monkey, the Blue Plate in Downtown Norfolk, and Coyote Cafe in Virginia Beach — all trendy hotspots in their day.

He has also made his mark in Hampton with the Barking Dog (though no longer owner) and at the Taphouse Grill on Queens Way with longtime friend Peter Pittman. Today his restaurant group is making a significant impact.

“One of the things I noticed early in my career on the Southside was we had a significant amount of business from the Peninsula,” said McIntyre. “Once I got over here (Hampton) I realized that people who were looking to be challenged through independent restaurants weren’t being provided with the opportunity in their own community — Hampton and Newport News. Now through consistency and creativity we are seeing more and more people from outside the area. We’re building a base that travels to see us. It’s really gratifying to see people from all the seven cities coming to Hampton now instead of an exodus from Hampton into the other cities to get a dining experience. To flip that around is humbling and really wonderful.”