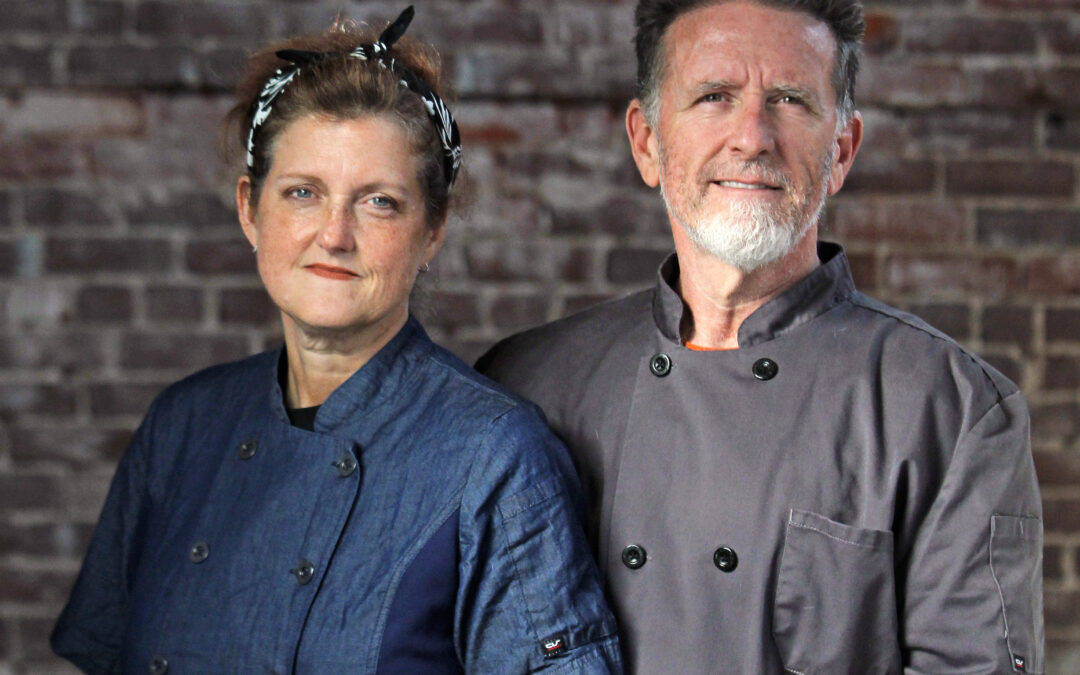 Once upon a time there were two chefs…

Ugh! Sorry for that saccharine start. But in my defense, when you’re telling the story about a couple who just opened a French-inspired bistro and bar called The Baker’s Wife and owns a restaurant with Goose in the title, well, you can’t help falling into a fairy tale frame of mind.

And why shouldn’t it be a sugar-dusted romance when the husband – Phillip Epstein – is an acclaimed pastry chef? He and his equally-talented, enterprising wife, Dana Clark Esptein, inherited the Grey Goose’s name when they purchased the Southern-steeped, Downtown Hampton tea room in 2007. In a whimsical foreshadow, a teenaged Dana used to cut class at Kecoughtan High for leisurely lunches there. “Instead of going to BK for a 99-cent value meal, that’s where I’d go,” she recalls. “Until my mom caught me.”

Her future was in the tea leaves. Although she first dreamt of a life in the theater, a disinclination for a starving artist’s life led her down a food service path. She earned her degree from Johnson & Wales University and cheffed in a variety of executive dining rooms and restaurants. In 2004, while working at the Williamsburg Hospitality House, she was set up on a blind date with Phillip, also a JWU graduate, who was head baker for Colonial Williamsburg. It might not have been love at first sight, but pretty close. The culinarians wed a year later.

When Dana learned Grey Goose was on the market, she said to Phillip: “Guess what we’re doing.” They made it their own – expanding the menu and catering, introducing drag brunches and improv comedy (Dana’s theater chops still in play) – yet didn’t tinker too much with a beloved formula. For 15 years, it’s flourished.

Still, the idea of a business they could grow from scratch was irresistible, so at the end of 2019, Dana threw herself into an intense, six-month, state-sponsored program called New Virginia: Scaling4Growth. The pandemic hit while she was enrolled in the “streetwise MBA” course, just as she and Phillip were settling on a site in the Phoebus section of Hampton for their new venture, enabling her to craft a business plan to meet the challenging circumstances.

“It’s got good bones,” Dana says of the 1905 brick building on the corner of Mellen and Mallory Streets that once housed the Electric Gas Co. Awash in charm, it, too, harks back to her youth. “As a kid it fascinated me,” she reminisces. “I used to look into the windows, all bright and shiny.” 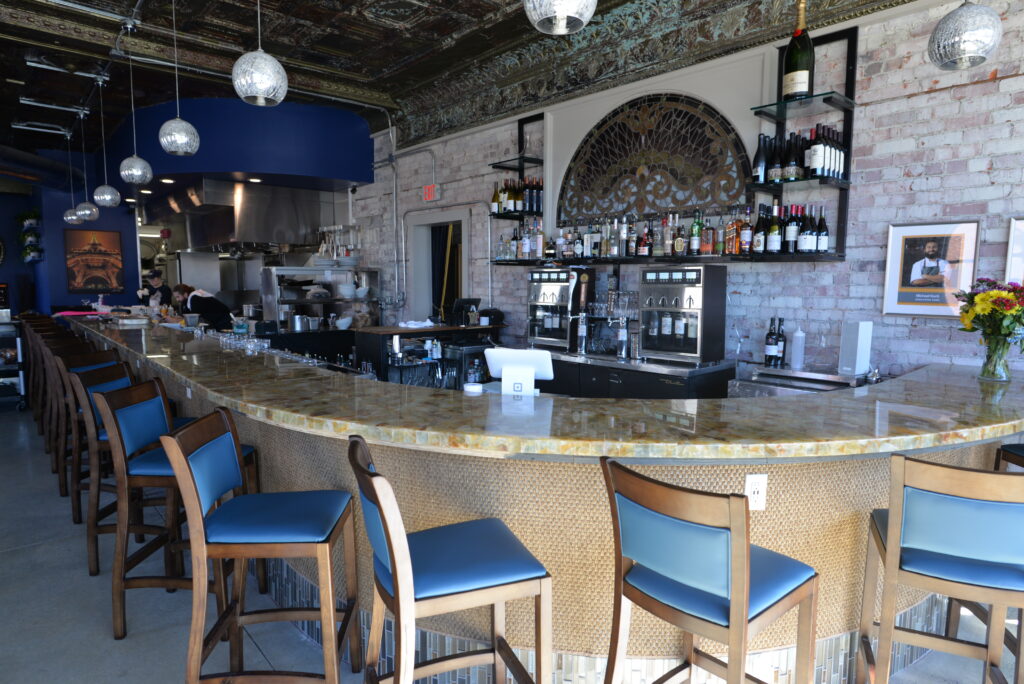 (An attractive curved bar is one of the artistic aesthetics inside The Baker’s Wife Bistro.)

Children may still peer into its tall panes with wide-eyed wonder. The Epsteins retained the tin ceiling and exposed brick, and hung a breathtakingly beautiful chandelier. The pièce de résistance is a 34-foot long glowing, golden quartz bar, the better to eat artisanal cheese, charcuterie and house-made bread by, my dear.

In determining the casually-upscale restaurant’s cuisine, Dana described looking down the street of this National Historic District. “I see two taco places, two with seafood, a bar with pub food, and one for Creole-Neo-Soul. I asked myself, what’s missing? French came to mind,” she recalls. “Not to say that didn’t scare me.”

While neither Epstein is French, both were schooled in classic culinary techniques, and Dana had interned at a Michelin-starred property in Europe while Phillip was immersed in old-world fine dining at the Williamsburg Inn. But they weren’t sure the neighborhood was hungry for French fare.

So they opted to make it French and American; approachable French. “I didn’t want a menu where people don’t know what words mean,” she says, envisioning a couple at home:

They created a tagline: From au gratin to French fries and filet mignon to N.Y strip. “We have sturdy ‘man’ food,” Dana emphasizes.

Still, she’s been pleasantly surprised. “I was wrong. I underestimated Hampton,” she says of her birthplace, as many people have shared tales about their French connections. “They’ve reached out to me to say that their husband is French or their grandmother was born in France.”

Even when a dish presents new territory, it’s been embraced. Dana recalls one delighted diner’s compliment: “I enjoyed the foie gras. By the way, what is it?”

“What we offer is uncommon for around here,” Dana elaborates. “But now you don’t have to go to Williamsburg or Virginia Beach for French food.” And those from beyond Hampton are discovering Phoebus as a destination; its quaint “frozen-in-time” visage popping with eateries, wine bars, even a budding brewery. “People park and walk around,” she says. “I see a lot of foot traffic.” Come spring, The Baker’s Wife’s outdoor seating will beckon.

Dana chuckles at the darker elements of the bistro’s name, a leading character in Stephen Sondheim’s Broadway musical “Into the Woods” who gives into temptation and gets trampled by a giant. “That’s not the goal,” she drolly admits. But she likes it because it embodies both Phillip and her. Michael Koch, a Culinary Institute of Virginia alum who made a name for himself at Zoës Steak & Seafood in Virginia Beach, rounds out the cast as chef.

The trio emphasizes wines with a Wine Club, classes and tastings (their inaugural wine dinner is March 11) and is instituting a chef’s table for parties of six to eight with a bespoke menu based on the party’s wishes.

So the girl who skipped school winds up reigning over two popular restaurants. She and the man of her dreams magically blend their personal and professional lives. “When you work with your spouse,” she says, “you know you have each other’s back.” Then adds laughingly: “And he hasn’t killed me yet.” In the real world, you can’t get more happily ever after than that.

A one-night stand allows you to make your deepest fantasies come true without the fear of appearing https://vibragame.net/chatroulette/abnormal, but each has its own limits. Your goal is to satisfy each other, so listen to your partner if there was no other agreement between you before the act began. [