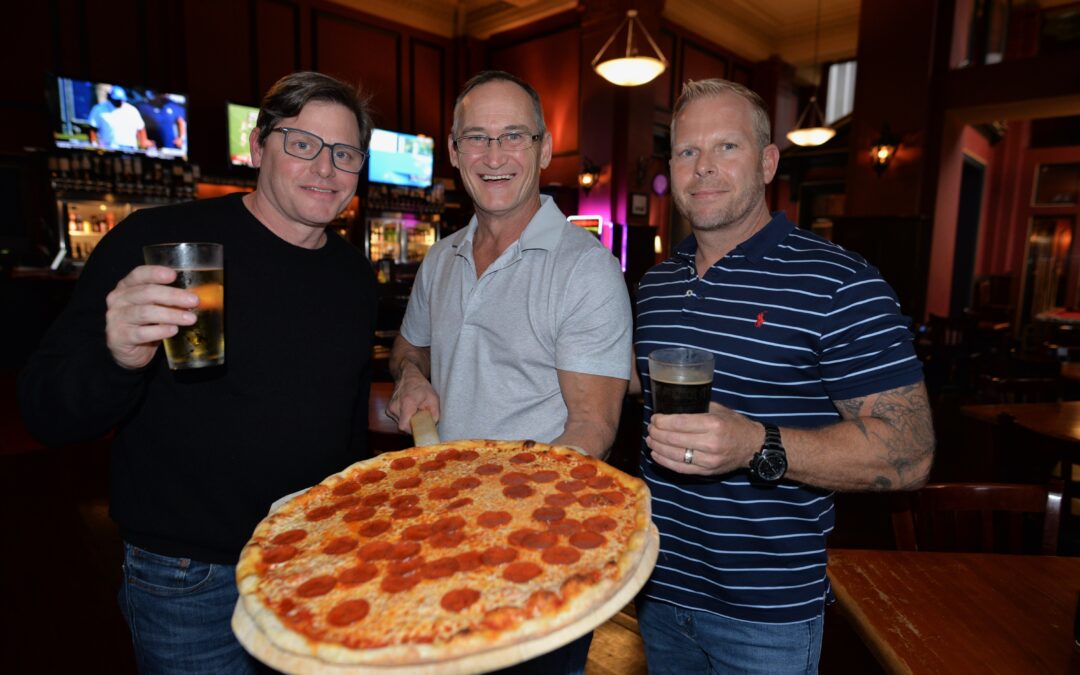 Back in the 1980s and ‘90s, I used to make my way up to New York City for concerts, shopping in SoHo and the Village, and an authentic slice of the Big Apple — pizza.

When some old school music friends have visited Norfolk in the past few years they seem to have one common request — where can I get a real slice of pie?

Of all the outstanding varieties of pizza in the 757 region, one place comes to mind to satisfy their New York demand — The Pizzeria at Wards Corner in Norfolk. I also recommend this place because I know I can’t bullshit them as I’ll never hear the end of it.

The Pizzeria is a no frills, mostly carry-out joint owned and operated by Todd Craig. The pizza is as simplistic as it is delicious with its thin (but not cracker-like) crust, perfectly red sauced and cheese surface, and topped — my choice — with real pepperoni. It is as if you’re standing on the corner of Mott Street and Spring Street at Lombardi’s or Sal & Carmine’s Pizza. It’s the real deal.

Turns out I’m not the only local fan of The Pizzeria.

Local longtime restauranteur Todd Leutner, who co-owns Longboards (locations at East Beach and Olde Towne Portsmouth) and the Norfolk Tap Room with Vincent Ranhorn, routinely stops in for a to-go order for his family in the nearby North Shore Road neighborhood.

Like most restaurants, the effects of COVID-19 have impacted the trio of establishments co-owned by Ranhorn and Leutner. After a short downtime, they successfully reopened both Longboards locations with all the appropriate rules concerning sanitation and distancing. Both are considered neighborhood restaurants serving locals.

The Norfolk Tap Room, on the other hand, had remained closed in downtown Norfolk on the corner of Main and Granby Streets.

“Being downtown,” explained Ranhorn,” One-third of our business is travel-based. We are surrounded for four hotels.”

The downtime gave Ranhorn and Leutner time to refocus on how they wanted the business to evolve — and this wasn’t the first time.

Both Ranhorn and Leutner worked in restaurants since their teenaged years at such places as the Blue Hippo and La Galleria.

In 2000, they joined forces and opened Fusion 440 and then Velvet 25, a cozy, high-end restaurant in what was considered a challenging corner in Park Place.

Five years later, the dynamic entrepreneurial duo moved their concept to Main & Granby on the stunning first floor of a 1920s-era bank building and called it Trilogy.

When the economy tanked in 2009, they began to rethink their upscale brand in downtown at a time when new restaurants were popping up all around. They renamed the restaurant Norfolk Tap Room and focused on craft beers and gourmet burgers.

“We were basically the only taproom with burgers when we started this in downtown,” said Leutner.

From the Great Recession to a global pandemic, the economic realities have been guides for Ranhorn and Leutner.

With this in mind, Leutner mentioned The Pizzeria to Ranhorn and then set up a meeting with pizza-maker/owner Todd Craig. Turns out Ranhorn knew Craig from their days at La Galleria.

With a wife and family at home and a busy pizza business to oversee, Todd Craig wasn’t sure if he was ready to take-on more business opportunities. But Craig was impressed with the passion each Ranhorn and Leutner had for the restaurant business as well as their longtime commitment.

“We are lifers,” Craig said.

The trio added a refurbished pizza oven in the kitchen of the Taproom and reopened the business in late September as The Pizzeria at Norfolk Tap Room.

In addition to discounted drink prices, Happy Hour (Monday through Friday 4-7 PM) includes a great deal on two slices of pizza with a topping for $3.95.