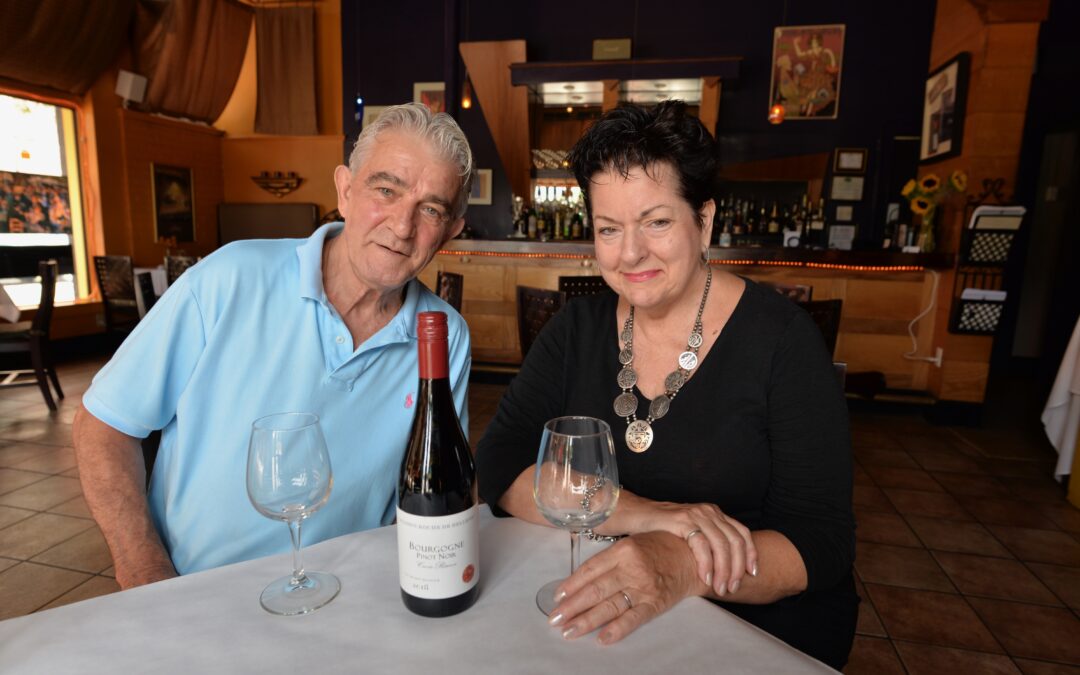 Restaurants have been on the frontline of businesses most challenged by the ongoing global pandemic, seating diners at tables 6-feet apart and operating at 50% capacity. And that’s if customers venture out.

The scenario is even more difficult for a cozy restaurant such as Voila, with its pre-Covid capacity of 12 indoor tables and eight barstools.

Dining at Voila is an experience; the ambience, atmosphere, attentive wait staff, decor, menu and drink lists are traditional European by design.

John & Maggie Tsouris took ownership of Voila in 2012 after a long, successful career in the restaurant business that included owning and operating Boulevard Cafe and Enrico’s Ristorante.

A heavily draped curtain hangs at the entry of Voila to prevent outdoor air from impacting the snug dining room. Visually savor the white table clothes, intimate, warm lighting, and where the replicated art of French painter Henri de Toulouse-Lautrec and his colleagues of the late 1800s adorn the glass windows while classic era jazz music serenades at a perfect volume so as not to interfere with  conversation.

John Tsouris still speaks with a heavy Greek accent. His hometown is Argos is one of the oldest continuously inhabited cities in the world.

While Maggie runs the front of the house (restaurant) and tends the artistically-pleasing bar, John is out of view in the kitchen. His workday begins around 11 in the morning as he shops for fresh ingredients for the evening dinner menu. He spends three to four hours each afternoon prepping before Voila’s 5 PM opening each Monday through Saturday.

Voila’s menu is an exceptional mixture of authentic Greek cuisine from John’s homeland and traditional French for a taste of Mediterranean Europe culture meant to dazzle the taste buds. It is an oasis for globetrotting locals and for international visitors alike.

“This is a military town and people are very knowledgeable of culinary experiences,” said John. “We have to be able to offer them whatever they’re looking for.”

According to Maggie, the three most popular entrees at Voila are the Beef Wellington (a center cut Hereford fillet wrapped in a puff pastry and served with mashed potatoes, roasted vegetables, and a cognac demi-glace, priced at $32), Gratin De Fruits De Mur (a seafood medley of scallops, shrimp and lump crabmeat crowned with gruyere fromage and then baked in a brandied lobster sauce, served with roasted vegetables and rice, $32), and Solomos Exohiko, a Grecian dish John created featuring a filo pastry stuffed with salmon, spinach and feta cheese that’s baked like spanakopita and served with veggies and a most satisfying avgolemono sauce ($23).

Customers will find everything to their liking including the Duck a l’Orange ($27) and Paidakia Arni (grass-fed Jamison Farms lollipop lamb chops, $26).

“You have some people who love lamb or duck but they’re not going to cook it at home,” Maggie explained. “They know it’s done right here. Everything on the menu sells.”

No meal is complete without a proper wine to accompany and compliment each bite. Maggie has a philosophy that is inspirational and speaks to Norfolk’s global connections.

“I think what is important on a wine list is variety,” she said. “I try to have lots of different countries represented and I think that really helps. I keep it pretty simple, like, one Malbec, one Pinot Grigio, and so on but really nice.

“As far as cocktails, as you know, I don’t try to reinvent the wheel,” she continued. “I try to bring back all these ol’ classics that go back a couple hundred years and introduce the younger kids to them, which they love. They’re very, very open for it. A couple of these drinks are from the Hotel Monteleone and the Sazerac Bar, both in New Orleans. I love to bring that influence in.”

For Voila, the Downtown Norfolk Restaurant Week has always been a major success and unlike some restaurants, Voila will provide guests with three or four choices for the $35 three-course restaurant week special.

“We look at restaurant week as a promotion of our menu,” Maggie stated, “and put your very best out to drawn people.”

“We will serve a veal that we call Veal Santorini,” John shared. “There will be seafood. There will be a steak. And possibly a seafood pasta, like a seafood puttanesca. We’re going to do a cold soup — a tomato-based Gazpacho.”

First course options will include the traditional escargot and salad.

Maggie and John are hoping the restaurant week will reinvigorate regulars and attract new customers. After closing the restaurant for two and a half months things have been tough, down more than 50% on even a good day.

“There are days when we’ve have four people in here,” Maggie shared. “It’s just crazy.”

The health crisis has had a domino effect. Concerts, festivals, events, and the performing arts have had their seasons cancelled. Many of Voila’s customers are those who enjoy dinner before a show.

“We’ve lost 100% of that clientele. Even the (Virginia) Opera folks themselves that produce and direct used to come in. It’s not just the guests who are going to the shows. All that interaction is being missed.”

Many restaurants have as a matter of survival been allowed to offer outdoor dining in spaces such as on-street parking spaces, sidewalks, and parking lots. Thanks to the neighboring 411 York restaurant next door, Voila has been able to serve outside.

“It has definitely helped,” said Maggie. “We have eight tables inside and six outside.”

So, how do you prepare for a restaurant week promotion during a pandemic?

“This one is going to be interesting,” admitted Maggie. “What we typically do with the demand is we have to do two complete seatings. We do, like, a 5:30 and an 8:00 seating. So you’re turning the whole room twice. I don’t have a clue on what to expect on this next one. We have the outdoor space now, but that’s weather dependent so you can never really book those tables unless you are 1,000% sure that the sun is going to shine.

“This year I’m working with eight tables (inside) so we’ll see how it goes.

Voila is located at 509 Botetourt Street in the historic Freemason section of downtown Norfolk. 757-640-0343, voilacuisine.com. Open Monday through Saturday from 5 PM to 10 PM.