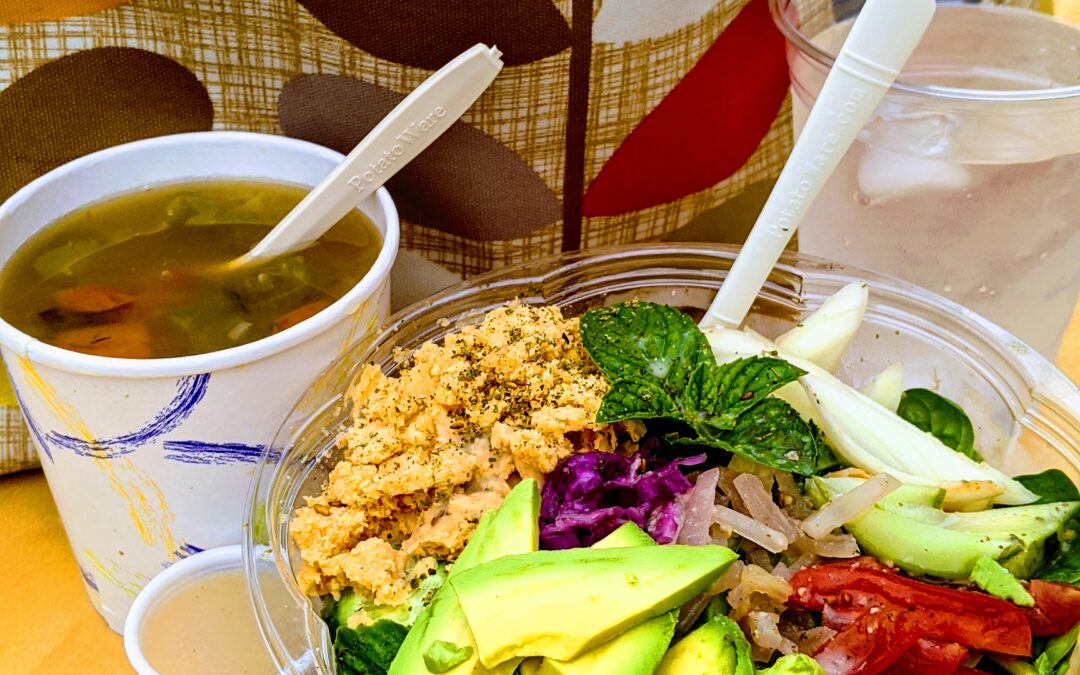 (As healthy as it gets salad bowl at Lokal Cafe in Williamsburg. Photo by Betsy DiJulio)

It doesn’t get a whole lot more local or scratch-made than the casual eats at Lokal.  Heck, they even make their own kombucha, complete with alcohol warning.

This cozy establishment’s corner location on charming Prince George Street is just across the way from the campus of William and Mary and tucked next door to the Fife and Drum Inn and The Spice and Tea Exchange.

Orders are placed at the counter that fronts the open and hard-working kitchen.  (Or, these days especially, you can place delivery orders by phone and online.)  Friendly mask-wearing staff members prepare your food to order and deliver it to you in paper and (mostly) recyclable plastic.  Seating is at a few stools along a counter in the big front window, a couple of two-tops under awnings on the sidewalk, and three socially-distanced 4-tops under a tent on the cobblestone street.  Abundant herbs and tomatoes, mulched with large white shells, grow in big pots in the corners.

Lokal serves breakfast, lunch, snacks, and an early dinner.  Menu items include muffins and other bakery goods, including their homemade focaccia; coffees/teas/hot chocolate/lemonades; smoothies; the aforementioned kombucha; sandwiches; soup; salad and other bowls; and specials.

First, I ordered a salad bowl.  A large portion of tender baby spinach came topped with a colorful array of fresh, marinated, and fermented vegetables, sprouted beans, and roasted portabellas, the latter of which could have used a bit more flavor.  The dressing was a light and tart blend of hummus, kombucha, and apple cider vinegar.

Though you can order non-plant-based proteins on top, I chose the house-made chickpea tofu which I had never tasted.  It was a beautiful orange-y color and pleasant consistency, but it tasted a bit dry and chalky.  However, I enjoyed it spooned onto a cucumber slice with a good dousing of the dressing.

The only other drawback of this ultra-fresh salad with all of its contrasting tastes and textures was that the bowl was too tightly packed to toss the ingredients together.  So after eating the vegetables off the top, I was left with a big bowl of spinach.  Though I brought it home with me, it did not survive the drive to Virginia Beach too well.

I also ordered the vegetable soup which I had sampled back during the fall.  I was wrong in thinking they had surely improved the recipe.  The soup is absolutely loaded with vegetables and legumes.  And I love the consistency, sort of a broth on top and more of a puree on the bottom by virtue of the cooked ingredients breaking down somewhat.

But the soup’s most prominent feature is its lack of taste other than a decided earthiness.  The salt that I requested helped, but it took a lot.  Fortunately, a staff member just handed me the kitchen shaker.  Virtually all soups need considerable salt to wake up the flavors, but this one seems to also need garlic, herbs, tomatoes or something to give it a serious boost, though maybe it’s just my taste buds.  (I promise I don’t have Covid.)

When I went inside to request the salt, I noticed a taco special promotion taped to the counter, so I ordered a trio to go for only $5.  These were the big win.  The homemade, gluten-free corn tortillas have an appealingly irregular edge and distinct taste of corn.  Beautifully presented, they sport a topping of fuchsia colored slices of cabbage playing off bright green slices of ultra-fresh avocado.

Each of the three different fillings are delectable: thoughtfully spiced, nicely textured, and rich in color.  The sautéed squash is the sweetest, the black bean the tangiest, and the jackfruit chorizo the hottest, though not eye-watering.  Sandwiched between the filling and toppings is a little dollop of hummus, which does not contribute much in the color department, but is a tangy counterpoint to the other ingredients.

The two side sauces were well-balanced accompaniments.  Though one was mild and one sweet-hot—quite hot, actually—they were both delicious and colorful with a chunky-pulpy texture. I was told that they have been experimenting with these little gems, so I hope they decide to vary the hummus and toppings from taco to taco to best complement each filling.

If you live in or near Williamsburg—or find yourself there—be sure to see the newly expanded and stellar Abby Aldrich Folk Art Museum and DeWitt Wallace Decorative Arts Museum.  Then pop into Lokal for museum fatigue fortification.