Baladi Mediterranean Café: A Playground for the Taste Buds 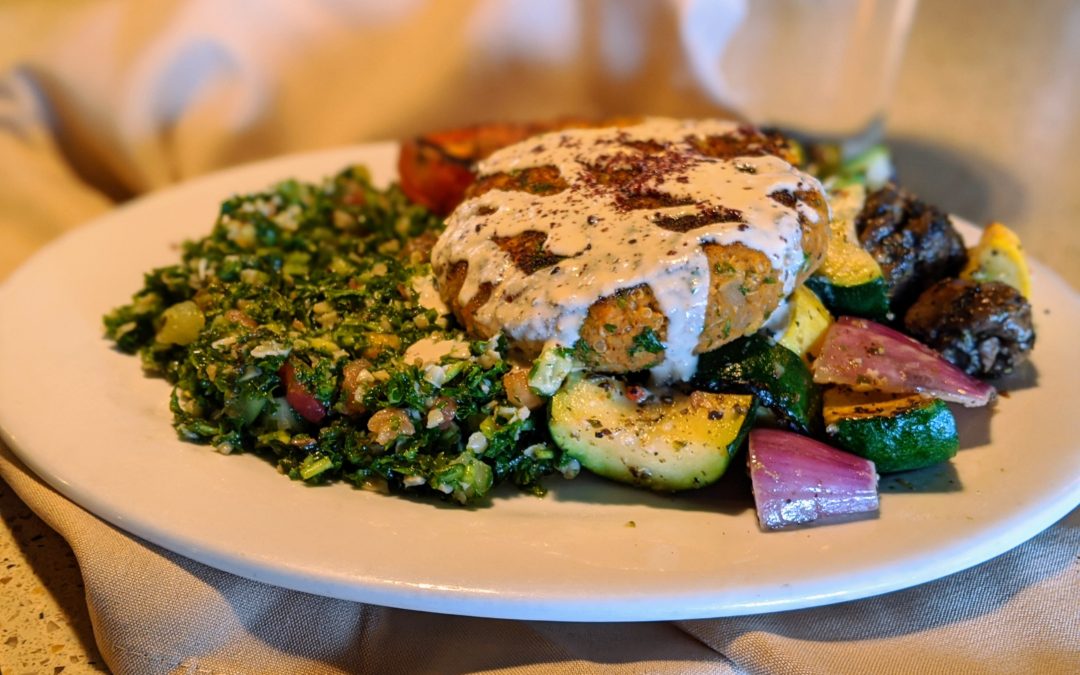 With some 35 plant-based dishes (and still more that are vegetarian)—mezze, soups, salads, wraps, entrees, sides, and desserts—Baladi Mediterranean Café is a vegan’s veritable playground.   They even offer vegan wine.  In fact, Wednesdays celebrate our lifestyle with complimentary falafel for each guest and a 50% discount on a bottle of vegan wine with the purchase of a pair of entrees.

Feeling more like a boutique restaurant than a café, and offering booth, table, and bar seating, Baladi’s ambiance is appealingly darkened and cozy and its service friendly and prompt.  Every time I have visited, it is with the intention of trying one of these seductive-sounding vegan entrées (though there are more): Falafel-Encrusted Tofu ($13.50/17.99), Lentil and Quinoa Patty ($11.99/16.99), or the Heavenly Veggie Patty ($12.99/17.99).

And every time, I can’t make up my mind.  So, I choose instead their earthy and golden lentil soup into which I dip their puffy mini-disks of pita bread, or falafel, maybe some tabbouleh or muhammara, perhaps kale salad with their addicting quinoa and almond pesto, a bite of someone’s brown rice and lentil pilaf with caramelized onions, olives or, of course, their creamy-tangy hummus.  With a “create your own” option that includes nonstandard ingredients and premium salad toppings like the pesto, a veggie patty, or a lentil and quinoa patty, it would be understandable if you never made it past the salad section.

But I encourage you to.  On a recent afternoon, particularly ravenous after the school day, I popped in for a late lunch at the bar—which turned out to be enough food for two lunches—and asked my server which of the three vegan entrees on my radar she would recommend.  Without hesitation she claimed that the Lentil and Quinoa Patty is “the best.”  I promptly ordered it, nibbling on those pita puffs while I waited.

I don’t know if it is the best because I still need to return to sample the other two, but it was outrageously delicious and, as I mentioned, bountiful.  The patty is served atop a bed of grilled vegetables with a side of tabbouleh. The tabbouleh was lemony and herby with a generous amount of parsley, which I think is underrated.  It got a bad wrap as a ubiquitous garnish years ago, but adds so much freshness, color, and texture to a dish. The patty is a blend of red split lentils organic quinoa, diced onions, tomato paste, and spices.  Not dense and burger-like, it is a softer style that still holds together will.  The grilled vegetables include hunks of red onion, peppers, squashes and Roma tomatoes.

Not an afterthought, the vegetables brought so much to the dish:  a mild charred flavor, toothsome juiciness, and a rich rainbow of colors.  In fact, I think what sets Baladi apart is that while the food feels like approachable home cooking, it is elevated not only be presentation, but by always a little something extra: a layer of flavor or an unexpected ingredient.  Never contrived or fussy, it just seems thoughtful like a veggie patty that is made “heavenly” in part by the addition of artichoke hearts and a side of eggplant puree.  Or a tofu patty that is not only encrusted with organic falafel, but is served over Sabanekh, which is not just sautéed spinach, but spinach sautéed with diced red onions, sumac, and lemon-olive oil.

Redolent of Mediterranean spices, pomegranate molasses, grilled this, and caramelized that, those of us of the vegan and plant-based persuasion can happily return many times with our vegetarian and omni friends and never order the same dish twice.  And I plan to.