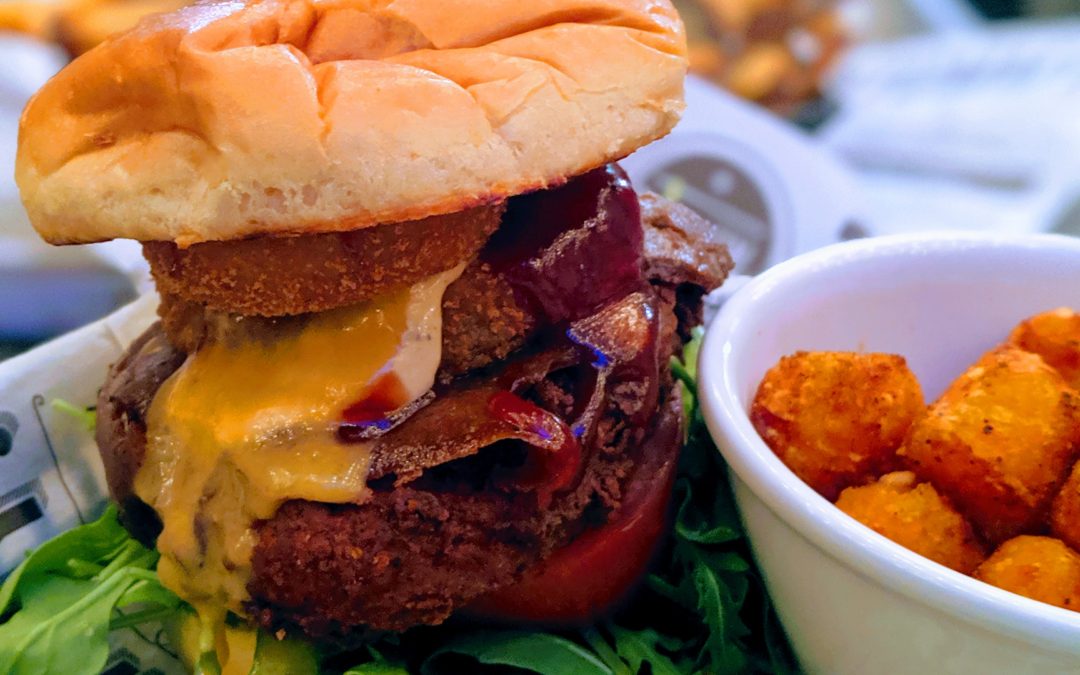 There are no bumbles—or grumbles—here, just delicious scratch-made vegan “junk” food and burgers, served up with a side of style and genuinely friendly service.  Oh, and lots of craft beers and ciders, milkshakes, and sweets.

“Dealing weed since 2018,” first as a pop-up food truck and now also as a brick-and-mortar boutique on General Booth Boulevard near Red Mill, this hive—owned by three queen bees—was hummin’ on a Wednesday night in October.  Families, friends, and couples occupied the trios of two- and four-tops with a stream of others arriving for the popular phone-in-carry-out service.

Cozy and stylish with warm reclaimed wood, an on-trend text wall of fun fonts, string lights, and lots of black for contrast, this is one honey of an eatery.  Order whatever you want at the counter from the lively chalkboard offerings—also on individual menus—though I highly advise going with staff recommendations.  But here’s a tip: there is an additional Pollinator’s Secret Menu if you know to ask.  On it, you might find  the likes of “Dazed and Confused,” a stack of Beyond or House burger, smashed sweet potato tots, a fried Just Egg, House Monterey cheese sauce, caramelized onions and peppers, and a couple of crispy strips of Honest Pastures corned beef (rock on local plant-based meat Rockstar, Dacia Thorson).

The mouth-watering and inspired combinations of ingredients in every bountiful and colorful menu item, from cleverly-named nachos and tacos to stuffed buns to sandwiches and more, remind me of an imagination game I used to play when I was about five or six years old.  I would lie on the den sofa and visualize a stack of layer cake slices and ice cream that stretched to the sky.  The point of the game was to get the succession exactly right, matching the cakes with just the right flavors of frosting and ice cream, alternating them in the most ideal order to maximize flavors.  Clearly, I’ve been food-obsessed for a long time.

On the night I visited with plant-based foodie friend, Juan Gelpi, we ordered Spicy Buffalo Cauli Wings to start.  Plump, perfectly coated and fried cauliflower florets were bathed in just the right amount of finger-licking sauce—a completely authentic version of Buffalo at its best—and served with tangy ranch plus fat sticks of carrots and celery.  I would go back for these alone.  The florets are so tender that I recommend spooning a little sauce over rather than dunking them, lest you leave half of the delectable morsels behind.  I would—and will—go back for these alone.

Sandwiches may be filled with the protein of your choice: a Beyond burger, a southern fried double-dipped deep-fried “chick-un” patty, and a house-made black bean and pumpkin burger.  Good luck deciding which.  Fortunately, the friendly staffer recommended the moist-inside-crispy-outside chickun in the “Boss BBQ Bacon Cheeseburger.”  We took the bait.  House cheese sauce meets up with pickles, strips of locally made Honest Pastures bacon, a sweet BBQ sauce, a slice of tomato, arugula, and…a fried onion ring.  That sauce, though…  This tower of power would be worth a protracted wait.  But there isn’t one here.  Service is appropriately swift and efficient for made-to-order, made-from-scratch food served on vintage-looking metal trays lined with paper reminiscent of letterpress newsprint.

Our other dinner selection was Bella the Beast Poutine.  This three-mushroom and caramelized onion gravy—which is more like a thick-ish sauce—infused with thyme and red wine is served over hand-cut fries and topped with crispy onions without the traditional Canadian cheese curds; you won’t miss them.  The only drawback to poutine—anyone’s rendition—is that the fries become soft.  But there’s an easy remedy: ask for the gravy on the side and dunk; that’s what I plan to do.  However, I want to sample everything on the menu—like the quinoa, sweet potato, and chili nachos—so it may be a while before I cycle back around.

Milkshakes in mason jars with paper or metal straws and lots of other eco-offerings makes the food at Bumbling Bee not only mind-blowing, but ever-more-mindful.