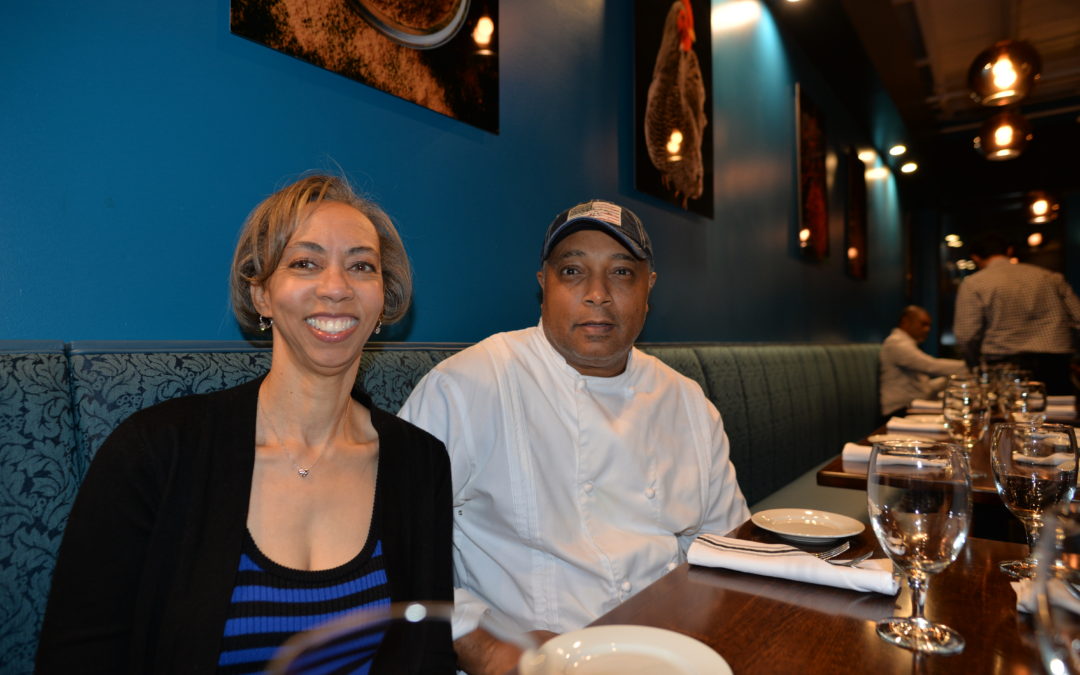 “When I made the commitment to go 100 percent gluten-free with this restaurant, everyone laughed,” recalls Willie Moats. “I felt like Noah building the ark.” The biblical reference isn’t a one-off. Moats gives credit to God for all the good things in his life including his wife of 14 years, Michelle. The name of their just-opened, Southern-contemporary restaurant in Ghent, 350 Grace, combines its street number with a prayer of thanks.

Notably, there’s no mention in the title that everything here is designed to be safely consumed by those with a gluten intolerance. Instead, vibrantly colored photos of paprika, blue salt, lemon zest, ginger, saffron, and turmeric adorn walls painted teal and pomegranate. They bespeak Willie’s affinity for international inflections and unbridled creativity and that his menu of down-home favorites will be anything but snoozy retreads. Fried Rappahannock oysters may be attended by a shaved fennel-lobster salad, seared-cast iron duck liver could come with a huckleberry-red wine sauce, and Tabasco honey might help dress a grilled organic pork loin.And if you experienced Willie’s cooking from the heady heydays of places like Coyote Café and Timbuktu, or within the constellation of downtown high-enders including 456 Fish and Byrd & Baldwin, you know to expect the unexpected. Once one of the hot “young gun” chefs on the vanguard of Southwest American cuisine when that was the hip “next new thing” in the 1980s, he’s now leading the way in addressing special dietary requirements with an upmarket-yet-comfortable establishment where gluten-free breaks free from just a tiny block on the menu.“Every day, someone is waking up to learn they have to deal with some sort of a gluten intolerance,” says Willie. About one percent of the population has celiac disease and must adhere to a strict diet devoid of gluten (proteins found in grains including wheat, rye, and barley) to prevent serious illness. Another six percent have a non-celiac gluten sensitivity. Dining out poses real challenges. Untrained servers might not know all the ingredients in a dish, menu descriptions only go so far, and some items that sound gluten-free – say, spinach dip – might be strewn with breadcrumbs. Even French toast made with gluten-free bread could be dipped in the same batter as the regular French toast, causing potentially dire consequences.

“Originally we looked at only doing a percentage gluten-free, but we realized we must be thoughtful of those who have to be careful of cross-contamination,” explains Michelle.

It’s tough to call which has prepared Willie more for this mission: Michelle’s discovery that she had a gluten intolerance eight years ago or his becoming executive chef at Harbor’s Edge, the upper-crust retirement community in Norfolk, around that same time, later moving into the role of its Vice President of Food Operations. Between satisfying residents at work, many of whom are lifelong gourmands, and Michelle, a foodie, he’s developed an extensive repertoire of dishes beyond what the gluten-intolerant must typically settle for.

“Michelle and I dine out, but we couldn’t find a place we could enjoy on a regular basis,” Willie says. Then one night I woke up in the middle of the night and thought: ‘Why don’t I create it?’”

There’s was a “meet-cute” or perhaps, more accurately, an “eat-cute.” Michelle, a healthcare professional, had just moved to the area from Chicago in 2002 when she read an article about Coyote Café’s new Norfolk location. “I wanted to try the dessert of tiramisu with raspberry mascarpone it mentioned so I went, but they didn’t have it that night,” she shares. “I returned a few nights later, and they still didn’t have it.” She enjoyed the view of the open kitchen and the chef running it, though, and Willie sent her out a different dish by way of apology. The two hit it off. After years of a “live hard, play hard” rock-n-roll-chef lifestyle, she was a calming presence for him, and he’s grateful for second chances.

Their restaurant (in the former Pasha Mezze) is suited for both romantic evenings and family gatherings. Along with their opening team of Herb “Tony” Williams (general manager), Alex Golff (executive sous chef), and Morgan Needles (pastry chef), they want to foster a sense of community among staff and guests. Eventually, they’ll offer family-style suppers in the back room for parties of six or more.

While relaxed and inviting, 350 Grace is all about high caliber cooking and presentations. Willie acknowledges that mainstreaming a gluten-free menu means that everything has to be so good, you won’t even realize that gluten has been eliminated. “I’ve had some gluten-free muffins so dry they crumble and so dense, you wouldn’t want to eat them.” Here, he serves moist and light corn muffins with sundried tomato and basil marmalade and biscuits with honey-maple-bourbon butter. While modest in most things, he unabashedly says he’s perfected his fried chicken and labels his meat loaf, served with corn relish and morel gravy, “must have.”

A full bar offers wine and cocktails, even a gluten-free beer. Among the bar food is a mini bucket of that fried chicken (a ribbing to KFC). Desserts include avocado chocolate mousse with salted caramel, dates, and whipped cream and chocolate chip cookies served with little milk bottles containing Silk chocolate milk and Maker’s Mark bourbon.

The eatery’s inclusivity calls to mind the modern-day parable of the custodian sweeping the school steps. He turns to the student in a wheelchair and says, “I’ll clear the ramp when I’m done with these.” She says: “But if you do the ramp first, we can all go in together.” Amen to that, and pass the fried okra with stewed tomatoes and goat cheese, please.