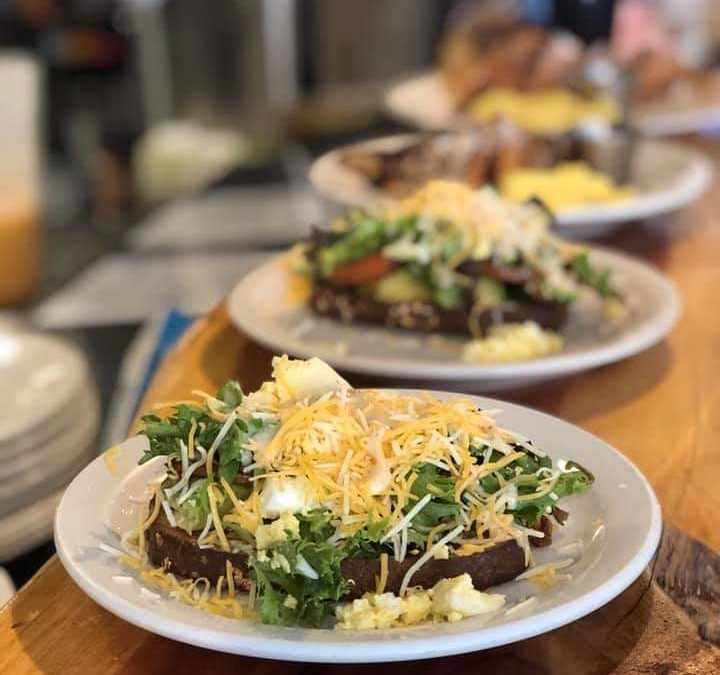 If April showers bring May flowers…what do May flowers bring? When it comes to the one that’s an apartment high-rise at the Virginia Beach Oceanfront, the answer is Ray Ray’s at the Mayflower, a new breakfast/lunch eatery by consummate chef Ray Labuen offering a boatload of the most creative plates under the sun. While other pancake houses ply run-of-the-mill, ho-hum yawners, Labuen lights up his daytime menu by impressing his idiosyncratic stamp on Southern favorites. And Southern isn’t limited to whistlin’ Dixie; it encompasses other hot spots on the globe including the Philippines, Hawaii and South America.

Of course, if you’re looking for your two eggs-meat-toast standard-bearer or fine French toast, you’ll find ‘em here. But strap on that napkin, and consider the edible wonderland that is Labuen’s menu, a culmination of his long tenure perfecting iconic rise-and-shine dishes nearby at The Belvedere Coffee Shop and Doc Taylor’s, and his sorties at Tautog’s and Auntie’s Tiki Bar & Restaurant.

For starters, he proffers powdered sugar-dusted beignets. The deep fried dough balls synonymous with New Orleans aren’t found too much around these parts. Have them straight up (they pair well with coffee – a blend made specifically for him by Norfolk Coffee & Tea Co.) or stuffed with homemade chorizo for an ingenious take on Pigs in a Blanket.

The eponymous Ray Ray is a next-gen Eye-Opener (a local sandwich Labuen helped put on the map). He stacks two eggs over hard with bacon, chorizo and country ham (you read right, that’s “and” not “or”) with grilled Parmesan tomatoes on pandesal. The subtly sweet Filipino bread serves as a bun and a culinary memoir reflecting Labuen’s birth in the Philippines to parents of Filipino and Hawaiian descent. Loco Moco, two sunny-side up eggs over a hamburger patty and rice with brown gravy, pays tribute to his heritage, too; its gravy redolent with garlic.

There are lumpia and dessert specials like bibingka, a coconut-rice sponge cake (from Angie’s Bakery, where he gets his pandesal), but perhaps what most celebrates his roots are ube (violet-colored yams) pancakes adorned with a confetti of coconut and a luster of homemade condensed milk. Though sweet, they veer clear of cloying, and you’ll dream about them for the rest of the day. They’re fun to order around kids who may have heard of green eggs and ham…but purple pancakes?

Those looking for a spicy kick to jumpstart their day will find it in Ray Ray’s Way – one of his biscuit and gravy varieties – with crispy fried chicken thighs, green onions and Sriracha. Breakfasts come with yellow stone-ground grits or sweet potato tater tots.

Lunch, like breakfast, can be had all day (this is the beach, who knows what time it is anyway?). His burgers run the gamut from classic (cheddar jack cheese, lettuce, tomato, red onion) to “The Mayflower” (tomato-based pork BBQ topping a 7 oz. burger plus country ham, jack cheese and Sriracha) to a vegan Beyond Burger. There are also arepas (the maize-based flat rolls of Venezuela and Columbia), some stuffed with grilled chicken, avocado, cheddar jack cheese, mixed greens and tomatoes, others with pork BBQ, chorizo and collard green coleslaw.

Ray Ray’s is a cheery place: bright, friendly, welcoming. His hand-picked front-of-the-house team includes Missy Bryan, Joshua Beyer and Arthur Labuen, the youngest of the chef-owner’s three sons, who emulates his pop’s affability. The come-as-you-are, positive-vibe-radiating atmosphere and top-notch fare make for a winner. No wonder you overhear things like Arthur telling Ray, “A lady wants you to go to Pennsylvania to open a restaurant” and see others giddily taking advantage of the offer at the bottom of the menu: “Pictures with Ray Ray Free!!!”

Bryan sums up the zeitgeist: “He’s got a following. It’s the cutest thing in the whole wide world – they come in all throughout the day shouting, ‘Hi, Ray Ray!’ and he gets excited to feed people.”

That excitement translates into his exclamatory catchphrase: Pahk! “The way Emeril says, ‘Bam!’ I say, ‘Pahk!’” he explains. Hence his inventive cocktail menu (Maverick Mimosa, Blueberry Lemonade, breakfast shots and more along with wine and beer) is “Pahking Awesome!” and when folks discover extra touches, like that Pigs in a Blanket come with jalapeno syrup, they blurt out “Pahk,” too!

Even the avocado toast warrants a “Pahk,” soaring above other places’ anemic versions. Here, it’s healthy and hearty, complete with Labuen’s trademark parmesan tomatoes and eggs. “There’s nothing like that parmesan tomato,” says Bryan. “The way the cheese crusts and caramelizes around the tomato.”

A customer wonders if he can substitute a Beyond Burger in the Loco Moco. “No problem,” Labuen slings back, observing his middle son, Ray Segundo, shoulder-to-shoulder with him in the open kitchen prepping an order (his oldest son Travis is in the Coast Guard). “Watch the egg, son,” he says firmly but gently. “It needs to be in the middle. It’s all about the presentation.” That’s probably the way his dad and uncle guided him when he started cooking in Southern California. “Take your time, but fast,” his uncle, Rudy Castro, drilled, rendering the speed and accuracy that have made Labuen a grill god, riveting to watch at the flat top.

To make his mom proud, he joined the Navy (Ray Ray was his boot camp nickname) and wound up in Virginia Beach. “I stayed because of the people,” he says warmly. “They’re so awesome. So nice.”

He sings as his crafts omelets and benedicts, his hands flying in a blur (sometimes making those motions in his sleep: “You’re not at the grill,” he recalls his ex admonishing him in the middle of the night). He takes requests not only for food, but also for songs. Listen to him belt out Journey, Chicago, Depeche Mode or The Smiths as he plates your fried chicken and waffles.

It’s enough to make you want to move into the Mayflower Apartments, considering that a lot of residents think of Ray Ray’s as their “kitchen,” and he provides room service. Catering, too. Pahk!