Hunting For A Local Getaway? Duck Into Decoys And Stay Awhile 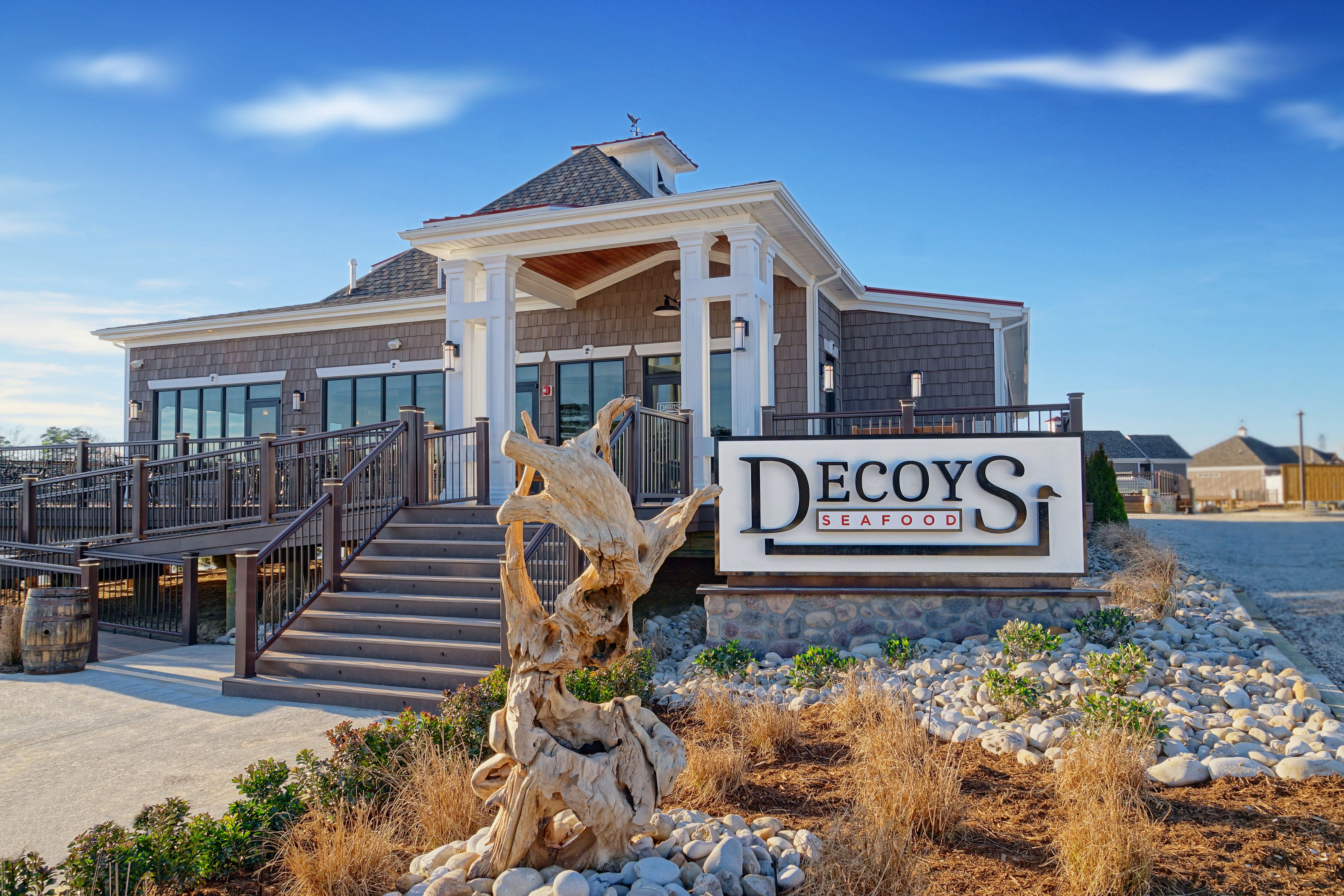 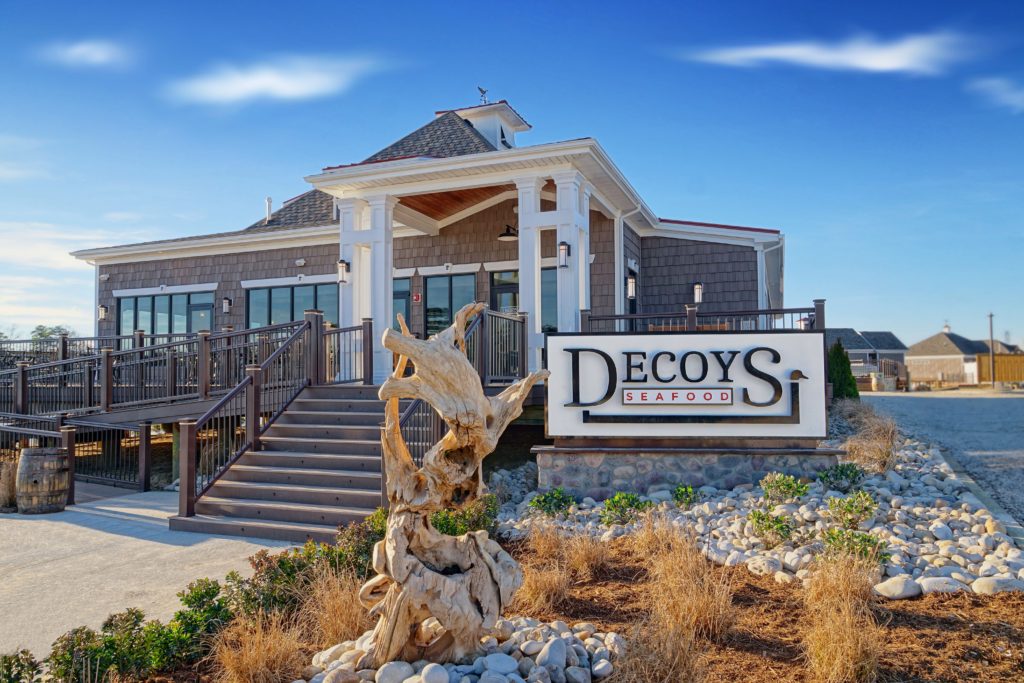 An osprey languidly beats its wings against a pristine blue sky above a fringe of wetland grass silent with serenity. Gazing at nature through wall-high windows here at four-month old Decoys Seafood in Suffolk, it’s tough to tell where outdoors ends and inside begins, so fluidly did owners Brian and Teresa Mullins build out this picturesque setting on Bennett’s Creek, about a mile upstream from the Nansemond River.

“There’s a greenhead mallard and a blue heron,” Brian points out, adding to the list of sightings in just the past minute. “Last week, we had a pod of dolphins, a hammerhead shark, two big skates.”

“Brian has the hunting eye, he senses the shadows,” says Ken Dodd, operations partner for Decoys as well as the Mullinses’ other Suffolk restaurants Vintage Tavern (est. 2006) and River Stone Chophouse (est. 2008). “This is his idea of a fish house.”

It sounds ironic as Decoys hews more chic than shack, until you sink into its relaxed unpretentiousness – a tonic before your first sip of stress-erasing Lemon Frasca (house-made limencello with vodka and a soda splash). And its menu leans old-school with fried seafood baskets, po boys, creamy crab and corn chowder and key lime pie. Complimentary hushpuppies, too. There are thematic nods like BBQ duck nachos and duck BBQ on a burger, plus lighter fare such as salads and grilled or broiled fish (grilled tuna with pineapple salsa and apricot glaze is a great catch).

The Mullinses’ restaurants are distinctive, but each embodies the finest craftsmanship – in the construction and the kitchen. Decoys, though, with its polished Americana, may be the most personal to them. Brian used to duck hunt here and the couple put in a bid for the property two decades ago.

They were advised against it, but returned in 2015 and today, after extensive work (including elevating buildings well above the floodplain), they’ve established not just a restaurant but a destination, a resortaurant, if you will, with a 58-slip, full-service marina (under dockmaster Brent Talbot whose wife Tanya Brickley runs the ship store), overnight cottages imbued with refined rusticity, the Blind Duck tiki bar and a pool with a swim-up bar.

It’s as if John James Audubon and Jimmy Buffett both whispered into the Mullinses’ ears as they imagined this six-acre staycation spot for Hampton Roadsters.

Then they got their ducks in a row. Literally. Upwards of 200 decoys (most carved over a century ago at Detroit’s revered Mason’s Decoy Factory) are on display and ducks are deployed in everything from weather vanes to newel caps. Even the restrooms are labeled hens and drakes.

Dogs have their day here, too. Spurred by canine paw prints discovered in the erstwhile ferry’s circa 1800s bulkhead, the Labrador-loving couple created a black Lab mascot named Mate (bestie to Blind Duck’s funky fowl caricature sporting Ray Charles glasses), and Decoys’ walls display pictures of some of their beloved dogs including Max and Molly (the Mullinses are cheerleaders for the Suffolk Humane Society, and foster dogs they often wind up adopting). They pointedly share that this establishment is dog-friendly. Still, Teresa almost vetoed the infamous “dogs playing poker” print. Brian compromised by hanging it in the marina’s shower house.

Just as he fully utilizes what he humanely hunts, he repurposed much of the timber cut down on the grounds. “We used 313-year old pecan trees for hardwood floors, pine for trim, eastern red aromatic cedar for furniture in the cottages…” Before he finishes, he’s greeted by two burly guys about to cool off with beers in the pool.

“And I thought it was going to be filled with girls in bikinis,” Brian jokes. Actually, he was reluctant at first to have a pool as it wasn’t a revenue stream. Solution: a swim-up bar, win-win for everyone. It augments Decoys’ indoor bar, the tiki bar and an outdoor service bar made of the original bar top from the restaurant at the former Bennett’s Creek Marina. Brian shares that they tried to salvage what they could, including over 1,000 rosehead nails.

The Mullinses respectfully considered their neighbors as they purchased the property, plus the adjacent site of The Landings, a 55+ condo-style enclave of single family homes which they developed to be built by others. “Through five re-zonings, we never had an issue with the community,” Brian states. “We’re stewards of history.”

Even Decoys general manager Heather Stouder has roots here. Her great-grandfather owned land nearby and her mom played in these parts as a child. “Teresa and I aren’t restaurateurs. We’re hardware. They’re the software,” explains Brian, indicating Dodd, Stouder and all their likable, long-tenured team. “They breathe life into it.”

Based on crowds, it’s fully animated. “We get everyone from the guy coming in off the creek to judges,” says Brian. Even the Lamborghini driver who fretted about parking his car on the crushed-shell lot. Since Decoys doesn’t take reservations, waits can be an hour or two. Most folks don’t mind as island time prevails, buoyed by live music Wednesdays and weekends arranged by Win Winslow. Local faves entertain both inside the restaurant and on the tiki bar’s deck.

So what’s on the horizon? Besides renovating Vintage Tavern to make it a touch more “approachable” with an expanded bar, the Mullinses’ next restaurant will be Italian. Though it’s too soon to say where it will be, they allow that they’re not looking to go too far afield. “We’re homebodies, and Suffolk is our home,” says Brian. He avers they would never franchise, but envision many more projects. Unless they can be done to their exacting standards, though, he says: “We’ll wait.” Spoken like a good hunter.