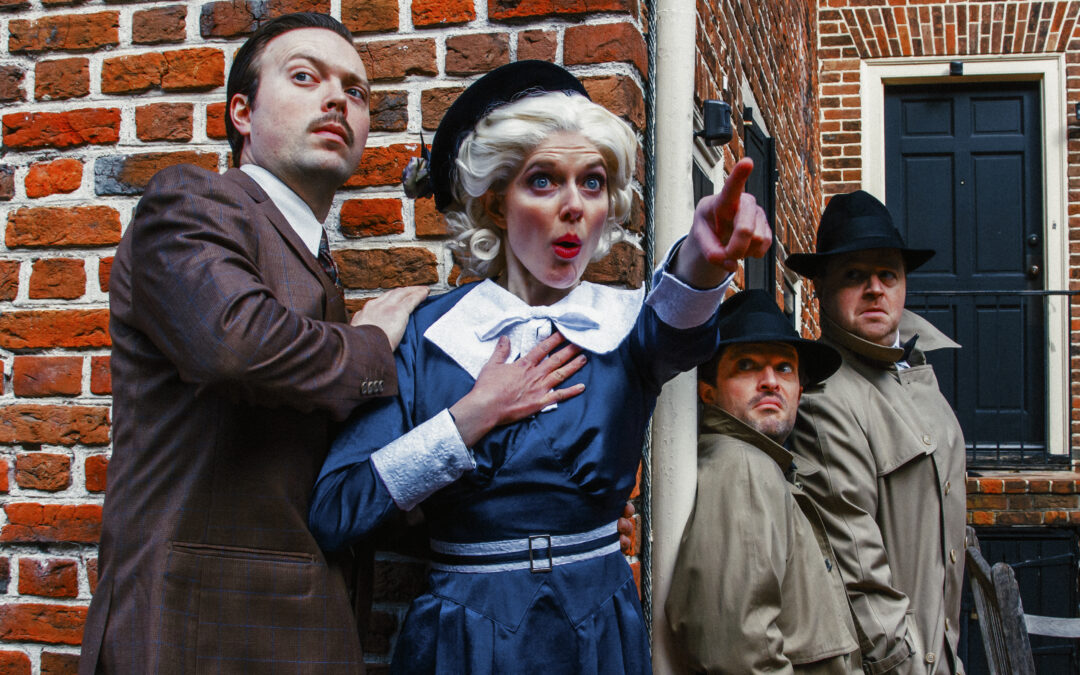 “I make no apology for loving both a good comedy, and a good mystery,” says Mark Shanahan, with both a smile and an emphatic tone—following a day full of rehearsing the latest Virginia Stage Company production, a play that will run at the midway point of the acclaimed theatre’s Season 44. Shanahan is a New York City based director/actor/playwright, who previously directed VSC’s The Hound of the Baskervilles for season 39, and penned A Merry Little Christmas Carol, a new take on the Dickens classic which wrapped an extended run here at the Wells just a few days ago. He is back in Norfolk to direct The 39 Steps, the fast-moving whodunit which won both Tony awards and the prestigious Drama Desk Award, for its Broadway run back in 2008.

Mark has directed The 39 Steps multiple times before, but never with this talented cast of four actors who collectively portray more than 150 characters over the course of two hours. “I love this play because I’ve had a long history with it,” he says during our recent chat at a large rehearsal space in downtown Norfolk. The set is still very much a work in progress on the Wells stage. Mark and I are joined by actor James Taylor Odom, who plays the show’s lead role of Richard Hannay. The three of us discuss VSC’s take on this Hitchcockian, suspenseful and zany romp of a play—and how audiences are really craving such escapist, laugh-inducing smart entertainment these days, especially considering the collective stress of this mercilessly ongoing pandemic.

When Mark was just a young lad of 10 years of age, his father took him to see the film version of The 39 Steps, which was part of a double bill at a second run movie house in NYC’s East Village. An Alfred Hitchcock directed classic from 1935, the suspense thriller was paired with another Hitchcock classic, The Lady Vanishes. That early experience with the artistry of the English master of filmmaking, inspired a young Mark in various ways.

“It was the granddaddy of a lot of spy stories that we still see today,” the actor/director says, referring to The 39 Steps film. His love of the film made him initially apprehensive of Patrick Barlow’s adaptation of it, based upon the John Buchan novel, into a play, till he saw an early version of it in London. Remarkably, Mark would later serve as the cover for the lead role of Hannay, during the highly successful Broadway run of the play, and did actually go on in place of actor Charles Edwards for several performances. “I got to really study the way the play was constructed, and see some wonderful actors do it,” Mark says about the experience.

His success with the play on Broadway led to the many offers to direct regional productions of the play, which was initially billed as Alfred Hitchcock’s The 39 Steps. He notes that “every production has to be handled differently,” though, and the premiere of it at Norfolk’s foremost professional theatre house is no exception. “I think it fits really beautifully in the Wells,” the director says.

“We wanted to create a set that sort of felt like an extension of the Wells itself,” Mark says, about his set that is being designed by D. Craig Napoliello. “This movie and play begins and ends in a theatre.” The creative team includes Jeni Schaefer as costume designer, with lights and sound handled by Alyssandra Docherty and Ryan Rumery respectively. Besides the aforementioned James Taylor Odom, the cast includes actors Kristen Hahn, Michael Di Liberto, and Steve Pacek, all of whom have worked with Mark before, but not for this play. Many of the cast members have portrayed characters in prior productions of The 39 Steps, however.

“We’ve all had experience with it, but we’re getting to come back to it after many years away from it, and reinvestigate it together, and make a new version of it for this theatre,” says its director, who also wrote and directed the inventive A Sherlock Carol, which ran Off-Broadway at New World Stages, and was a critic’s pick by The New York Times in December 2021. “I know from doing ‘Hound of the Baskervilles’ that this audience loves a good comedy, but it loves a comedy that’s smart…and shows you excellence on stage,” Mark says, regarding VSC patrons.

In The 39 Steps, Richard Hannay is a guy who goes on the run after being falsely accused of committing a crime. Along the way “he has to discover himself, fall in love, and save the world in order to save himself,” explains Mark. It’s quite a lot to portray during the show’s two acts, but Mark felt that James was the ideal actor for the role of Hannay. “His Hannay is very particular to what he’s rehearsing and finding…” he adds.

“Through this wild, espionage romantic thriller throwback, it’s a fun journey of self-discovery,” James says early on, about his character. “Richard Hannay is kind of going through a bit of a crisis himself. He has no friends, no partner, really no family…is stripped of any kind of specific identity, which is a great setup for where this character is going.” James and Mark have known each other for many years but are working together for the first time in this play. Mark tells me towards the end of our chat that working with this great cast is part of the joy of directing this production.

“You’re in the hands of really great actors for a two-hour evening, where you can forget your worries, but also be mesmerized by their expertise. And that’s the joy of it.”