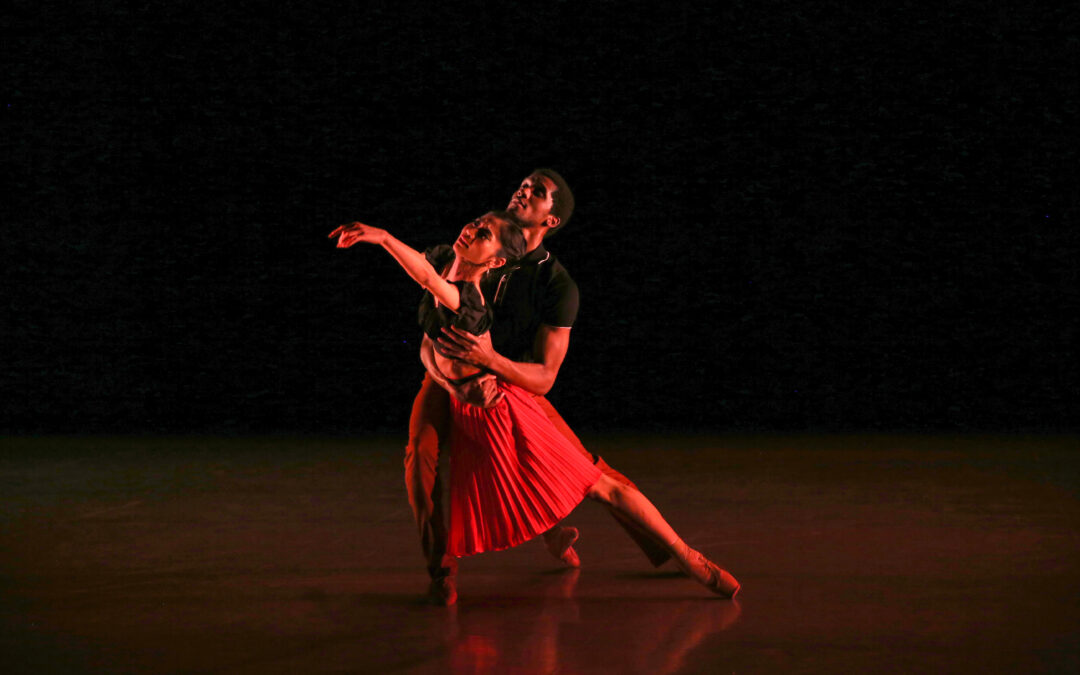 A ballet company takes a risk when commissioning a choreographer to make a new piece. “Neither side knows exactly what is going to be created,” explains choreographer Jennifer Archibald, whose newest ballet will be performed by Richmond Ballet on January 27 at Virginia Wesleyan University.

Called Guess Who’s Coming to Dinner?, Archibald’s piece was inspired by the 1967 film of the same title. The score includes music from the film as well as songs sung by Nat King Cole and Sam Cooke. It had its premiere in November at the Richmond Ballet Studio Theatre, and was danced by a stellar cast of seven men and five women.

But it’s also much more than a 20-minute piece: it’s a testament to the power of love, as well as the necessity of learning from histories and expanding definitions of ballet. Archibald realized while making this piece she was also creating an answer to the question, “How can we make ballet appealing to the person who is not a ballet connoisseur, but someone who enjoys great music and inspiring dancers?” Her piece amplifies a human desire for connection and belonging through a movement vocabulary that is, in Archibald’s words, “relatable.”

Speaking about her choreographic process, Archibald switches between using the words “cast’ and “team” to describe the 12 dancers she worked with. “I processed a lot of the questions that were coming up about interracial relationships out loud with the team, and this allowed me to bring them in and make them as committed to the story-telling as I am. We owed it to the Lovings.” Mildred Jeter, a Black woman, and Richard Loving, a white man, were married in the District of Columbia, then arrested in 1967 when they returned to Virginia. This state’s antimiscegenation statute banned interracial marriages. Their story propelled Archibald’s ballet.

“My focus was initially on interracial relationships through the film, Guess Who’s Coming to Dinner?” says Archibald. “I knew about the Lovings’ relationship and the court case [Loving v. Virginia], but I did not know that courthouse was 45 minutes away from Richmond, where I was making this ballet. Two days after I arrived, I visited the courthouse and cemetery with PJ [Sykes, Media Specialist for Richmond Ballet] who shot the trailer audiences see before the ballet is performed. Two images really resonated: the headstones of their graves, next to each other, and the way their love permeates the earth as they lie next to each other, and the other image is a felt experience, a question I had in the courthouse: why was this love put through so much pain?”

Archibald pauses as she remembers the details of that day, then continues, “The courthouse has this air of ‘You have done something wrong and you are going to get penalized for it,’ and it’s all because they loved each other. The Bowling Green area where they lived is so quiet. There’s a quietness to the trees and the wind. The place felt romantic, and this is something I brought into the choreography. At the same time, I question the decision of the police: they had nothing better to do than to drive to this couple’s home when they were sleeping and arrest them in the middle of the night? It’s as if they had a mission to ruin someone’s life, and there is no explanation that’s good enough for me.”

The story of the Lovings is particularly important to Archibald because her parents, a Black man and white woman, were married in Canada in 1969. “Within the ballet, I wanted to show the intimacy and sensuality of the Lovings’ relationship, which I do in one moment, in particular.” At other times, the dancers’ duets are more understated and reflect the velvety lushness and subtleties of voices like Nat King Cole’s.

Theresa Ruth Howard, an internationally acclaimed leader who consults with dance companies and created the platform, Memoirs of Blacks in Ballet (MoBBallet.org), has known Archibald for decades and describes her as an artist who deserves more recognition. “I don’t think that people truly understand how remarkable Jennifer Archibald is (in general), but specifically in this conversation about Black ballet choreographers during the cultural shift in ballet. She is antithetical to the archetype of the ballet dancer and choreographer in all ways. Being Black, female and tall, solidly built, and self-possessed just scratches the surface.”

Howard continues, “She was not aligned with the well-heeled ballet elite who typically grant entree into their hallowed realm, but rather cut her chorographic teeth in the genre of hip hop, and trained at The Ailey School. She strategically carved her space out, earning her stripes as the first Black female resident choreographer with Cincinnati Ballet… She has amassed the power to create ballets that tell our stories, in her way, both on stage and during the creative process. The results are thoughtful, respectful, provocative work in the ballet idiom that is of the ‘standard.’”

Richmond Ballet isn’t the only company to recognize Archibald’s unique skills: she not only creates narratives that are relevant to the 21st century, but also produces abstract, atmospheric ballets for companies. In 2020 she made Tides for Ballet West, at a time when the Covid-19 pandemic required distancing and masks for dancers, and Archibald’s musical selections for the piece drew from artists interested in the healing vibrations of sound. There was a complementary and cathartic sense of hope and perseverance in the choreography. In 2018 she created Myoho for Cincinnati Ballet, an exhilarating testament to the dancers’ capacities, with exquisite feats of partnering and beautifully designed formations.

In Guess Who’s Coming to Dinner? Archibald combines aspects of storytelling with abstract scenes. If interracial relationships are not illegal today like they were in the 1960s, there are still couples who face barriers to being together based on gender and religion. “Within the cast there was a wide range of ages and of experiences with love and sexuality. There was a dancer in the cast about to get married, a married couple, and a dancer who just a child, who was eight months old. All of those experiences of love became part of the rehearsal process, and made it special.”

The result is a stunning interdisciplinary endeavor that illuminates history, love, and belonging through film, music, choreography, costume design, and a brilliant cast of dancers. Archibald’s courage in exploring difficult conversations and painful historical moments is made visible through these dancers’ investment and sincerity. At the November premiere, the cast performed with a stunning mixture of virtuosity and vulnerability. Duets paired men and women of different ethnicities, as well as men with men. The choreography merged ballet steps with inflections of hip hop and modern dance, an exemplary example of contemporary ballet.

But it wasn’t only the steps that were creative and compelling. The cast of 12 dancers performed with a sense of curiosity, kindness, and desire that is rare in ballet. Many canonical performances feature kings, queens, or woodland creatures. Archibald’s choreography debunks the idea that ballet audiences crave opulence or escape, and her creations offer insights into our human condition. The audience in November responded with a standing ovation.

Asked what gives her this distinct ability to work with ballet companies without adhering to ballet’s conventional narratives or formulas, Archibald says, “I am unorthodox in the ballet industry. I didn’t come through the ballet enterprise,” where students are taught to revere these canonical works and obey hierarchies. “If someone is a principal or a corps de ballet dancer makes no difference to me,” she explains. “I am only interested in what they do on stage, if they act and craft movement really well. In rehearsal, I try to make sure that I have created a safe space so dancers can reveal themselves.”

One of the outcomes of Archibald’s method is dancers are empowered to speak honestly and question conventions. During a rehearsal Archibald asked who would be interested in same-gender partnering, adding, “I want it to feel authentic and real, and would like to know who feels they could perform this duet. Can you relate to this partnership or not?” One of the male dancers who is married to a man replied, “No one has ever asked me if I would do a duet with a woman. The assumption is that I am comfortable with this, even though I go home to my husband each day.” Archibald says, “That insight inspired me to cut a heterosexual duet I had this man doing and create a duet with him and a man. That was when I knew the piece was finished.”