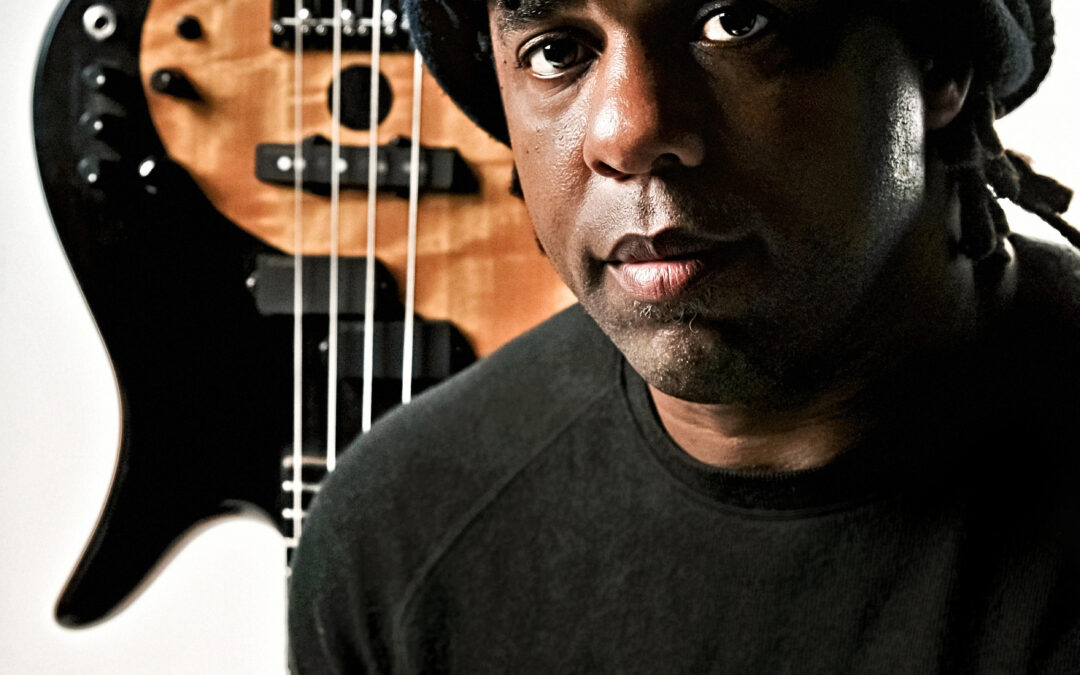 The story behind that title starts in 2006, when Wooten self-published a book called The Music Lesson, which had, at the beginning of each chapter, “a hand written measure of music. So…if you put all the measures together,” Wooten explained, “you get a song.” Penguin published The Music Lesson in 2008 and, Wooten added, “the same day that the book was published I released an album that had that song on it and that song was called ‘Lesson.’” (Solo bass with his brother Roy on percussion.)

The Music Lesson, a brief novel about the musical and personal growth of a young artist, is subtitled “A Spiritual Search for Growth through Music.”

This concerto that Wooten is playing with the VSO, which draws on those two, is Lesson Three, or, since he “felt it would sound cooler in Spanish,” La Lección Tres, for electric bass and orchestra.

(Rolling Stone cited Wooten as one of its 10 best electric bass players, and the more genre-broad allmusic.com placed him “Easily…among the top echelon of bass players in history.”)

Wooten grew up with musical siblings, playing bass “in a band” at the age of 2, and touring professionally at 5.

Playing music began as “a way to belong, with my brothers. When I was playing bass at 5 or 6 years old, i was an equal. I wasn’t a little baby; they treated me like an equal…At an early age I learned that music was a language…that you didn’t have to understand to ‘get it.’ And music brought people together…that right song comes on, everybody’s dancing. Music has a power that politicians don’t have…that police, that teachers, that nobody has but musicians, because it makes you move without force.”

He learned to read music, he said, in the 6th grade, and cited “great orchestra teachers…Miss Herbison, Mrs Chapman and…in high school, Ms. Georganne Locklear…They really expanded my musicality and my ears.” (All three teachers attended his September 2017 VSO concert. Playing for them a classical concerto calledThe Bass Whisperer, which he had co-composed with Conni Ellisor, and joining all three for a photo was “one of the greatest joys of [his] life.”)

Of La Lección Tres, he said in our wide ranging phone chat, “I just wanted to write music that sounded and felt good.”

Wooten made a point of distinguishing between what he sees as a conventional concerto, which sends people away with memories of the “amazing stuff” of a “very virtuosic” soloist, and his intent that people would “hear the whole piece and say “Wow! That made me happy.”

“I wanted to show people that the electric bass can be a solo instrument, and I also wrote in parts for me to do what the electric bass does, which is to accompany musicians. So for much of the concerto I’ll play bass parts underneath the violin, underneath the cello and the oboe, because I want people to see what the bass does, but I also want people to see what the bass can do.”

“I want this piece to bring joy to people.”

That’s followed by William Levi Dawson’s 1932 Negro Folk Symphony. Dawson, a 1921 Tuskegee Institute grad, picked up a Bachelor’s of Music at the Horner Institute of Fine Arts, studied at the Chicago Musical College, earned a Masters of Music degree from the American Conservatory of Music, and eventually returned to Tuskegee to teach.

The Negro Folk Symphony, his only symphonic composition, premiered at Carnegie Hall with Leopold Stokowski conducting the Philadelphia Orchestra in 1934. The half-hour, three movement work is a rich melange that ranges from emotionally somber and even mournful to grand and triumphant to lively, energizing and almost celebratory, occasionally using themes drawn from African-American spirituals.

All three works will be conducted by VSO’s Principal Guest Conductor, Norfolk born Thomas Wilkins, who met Wooten back in the 1980s when Wilkins was a tuba player at Busch Gardens.

“Just allow to the music to do what it does,” Wooten advises. “It’s sort of like taking a vitamin. You take it and forget about it and it does what it does. Allow the music to take you on a journey [and] all the other parts of life can disappear for a while…in this joyful piece.”