TRAVEL: A Weekend of London Pubs 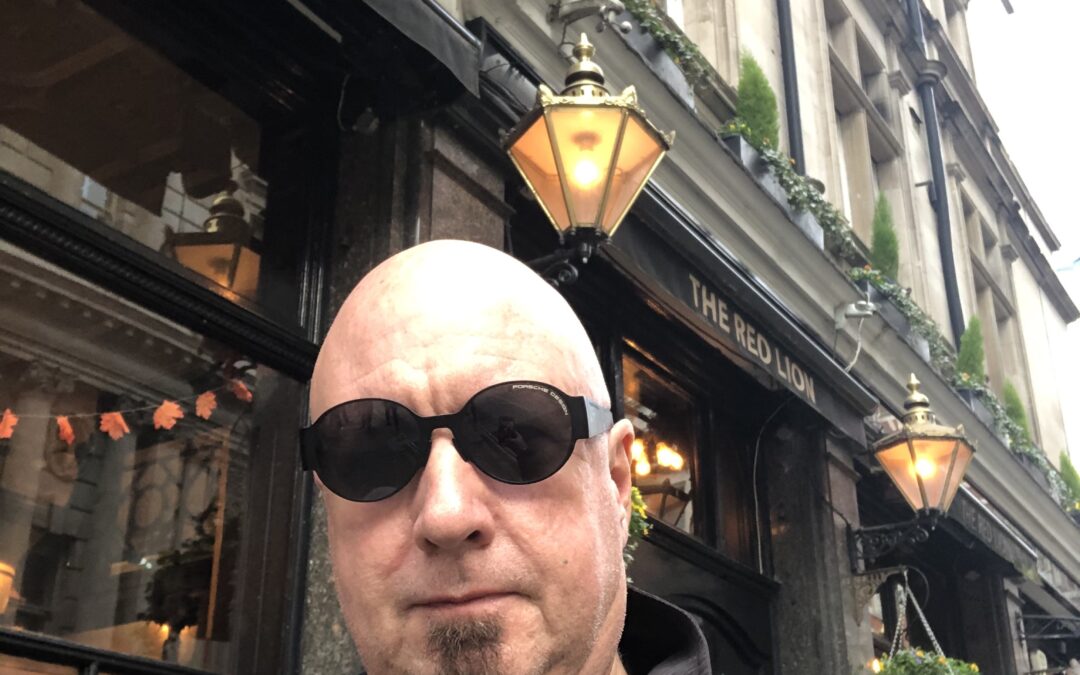 I had bellied up to the bar at The Ship & Shovell, pardoned myself for the intrusion of three older, longhair gents, one of who was missing a tooth or two, and ordered a pint of Badger Best Bitter from the hand-drawn real ale cask.

I spied a less crowded nook in the pub to stand and await my fiancee Lynn, who had popped into the ladies room upon arrival.

John, a stylish 80-year-old with snow white hair and matching goatee,  promptly introduced himself as a conversationalist. He asked where we were from.

“Norfolk, Virginia…in the New World,” I replied with a wink and smile.

Dapper John paused for a second, his right eyebrow lifted, and asked, “Norfolk, that’s near Jamestown, is it not?

“I visited Virginia once many years ago,” he said, “but in the northern region outside of Washington.”

Impromptu conversations come as easy as spontaneous combustion in an English pub.

To celebrate my late October birthday, I decided to skip over to the other side of the pond for a four-day weekend in London. It had been nearly seven years since my last visit to the UK.

Pubs have been on a steady decline over the past decade or so, many going out of business due to changing cultural preferences such as drinking at home while watching television. I was curious to see how London pub culture fared after the added burden of surviving the global pandemic.

To my delight, I’m happy to report, pubs are alive and well in London. 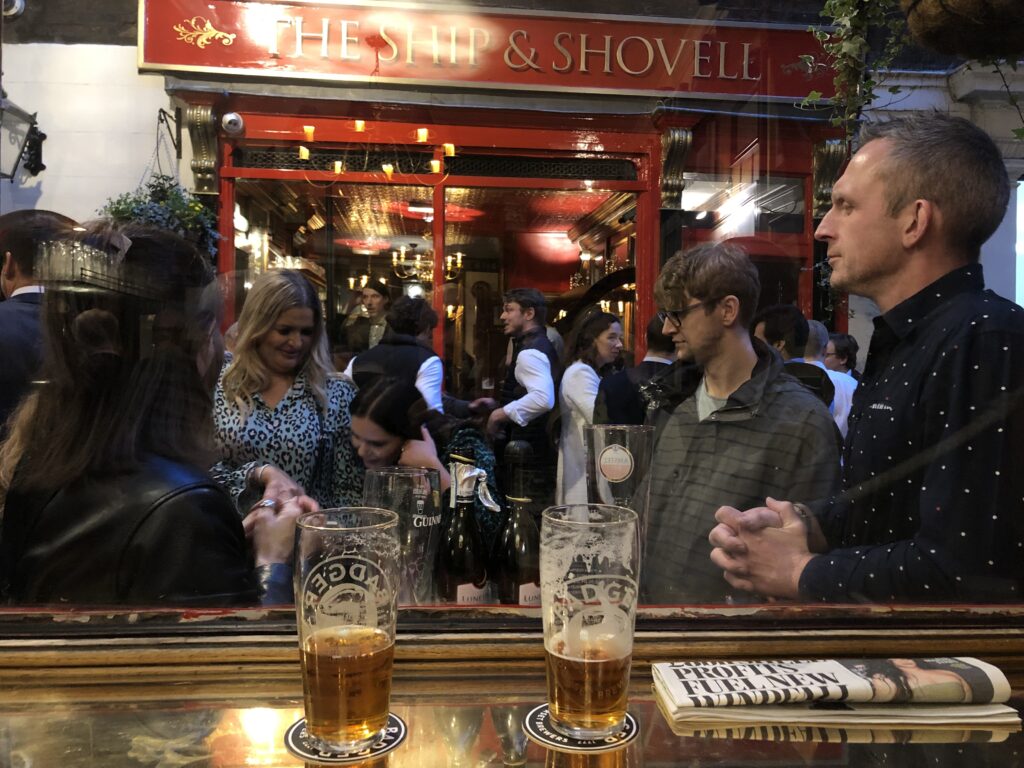 Part of the survival of classic pubs can be attributed to large corporate asset conglomerates. Many pubs in London are under the Greene King name, one of Britain’s leading pub retailers and brewers, with some 3,000 pubs under its control.

As a brewery, Greene King was founded in 1799. The business evolved through mergers and acquisitions, and today is an investment holding of a Hong Kong-based company.

In 2021, Greene King was named the best pub operator in the Britain’s Most Admired Businesses Awards.  Other pub operators include Young’s, JD Wetherspoon, and Fuller, Smith & Turner.

Most pubs in London, as I observed, offered a variety of traditional, low ABV English real ales, a draft selection of gas-fueled beers with Peroni lager and Guinness Extra Stout being the most prominent sellers, and then a small set of taps for UK craft brews.

For my London weekender, I stayed at the delightful Great Scotland Yard Hotel, the recently re-imagined police headquarters turned into a luxury hotel. It was in close proximity to one of my favorite London watering holes — The Red Lion.

Since The Red Lion was situated between Parliament and Winston Churchill’s War Office, it is said to be the former British prime minister’s favorite pub.

Today, it appears little has changed at The Red Lion as members of the House of Commons and other government workers flock to the pub by mid-afternoon and into the evening. It certainly makes for interesting political and issues conversations, and I enjoyed a few.

Another great pub in this famously British politico part of town is Westminster Arms, another hotspot for those who work at Parliament as well as journalists hoping for a discrete inside scoop. The traditional pub even has a division bell, supposedly so MPs can scurry back to the House for crucial votes. Order a pint of Spitfire or Master Brew (a Kentish ale) made by Shepherd Neame, said to be Britain’s oldest brewery dating back to 1698.

Most of the pubs I patronized on this excursion were within a 10-15 minute easy stroll from my hotel.

In the Covent Garden section of the city, just a stone’s throw from Trafalgar Square, I found The Salisbury much to my liking. The dark interior featured heavy mahogany wood, ornately etched mirrors, a patterned red carpet, and Victorian light fixtures. Little seems to changed since it opened in the late 1800s.

On my evening walk to Rules, London’s oldest restaurant and a dining experience highlight with its compartmentalized rooms, lush decor, and exceptionally prepared traditional and wild game entrees, a nice surprise was finding Harp Covent Garden, a snug pub recognized and highly praised by the Campaign for Real Ale. The draught selection includes such things as Harvey’s Sussex Best Bitter alongside the trendy Dark Star’s Hophead.

As a member of the Norfolk NATO Festival’s Board of Directors, I made a number of friends and maintain those relations with former personnel serving their countries and stationed in Norfolk at NATO’s headquarters.

I was fortunate on this trip to catch up with Sir Graham Stacey, a now retired British Air Marshal with the Royal Air Force Regiment. Graham suggested we meet for dinner and a pint in the Borough Market, a hip, highly energetic and booming open-air market set up under the Industrial Age ironworks where trains frequently roll overhead.

I suggested we first meet for a quiet pint at the Old King’s Head, located on a side cobblestone alleyway just off the beaten path and somewhat obscured from the Borough Market.

The Old King’s Head is without question a working class establishment with what appeared to be exclusively frequented by locals. It was clean, but not fancy. No corporate ownership plaque was visible.

The inside was jamming, so we pulled together a couple chairs on the narrowest of sidewalks for a delightfully malted pint of Sharp’s Doom Bar Amber Ale from Cornwall.

Following the Old King’s Head, we popped over to The Borough to dine at the industrial-chic Turnips with Tomas Lidakericius, which I recommend next time you’re in London. The food presentation is artfully done and the ingredients freshly selected by its chefs. Nice wine list from which I found a most enjoyable bottle of Portuguese tinto.

For a nightcap before flying home the next day, I returned to the The Ship & Shovell. The Victorian-era pub is located just through the narrow alleyway beyond the touristy Sherlock Holmes-themed pub. The establishment is split in two halves where patrons can take fives steps across the alleyway to the other half of the pub. Underground is a tunnel connecting the kitchen and cellar where casks of beer are stored.

In addition to the aforementioned Badger Best Bitter hand-drawn ale, give The Fursty Ferret a try for what the pub describes as a “morishly malty, amber ale.”

The Ship & Shovell is one of some 250 public houses operated by Hall & Woodhouse, a British brewery founded in 1777 and most commonly known as Badger Brewery. After all these years, it remains an independent, family-run brewery.