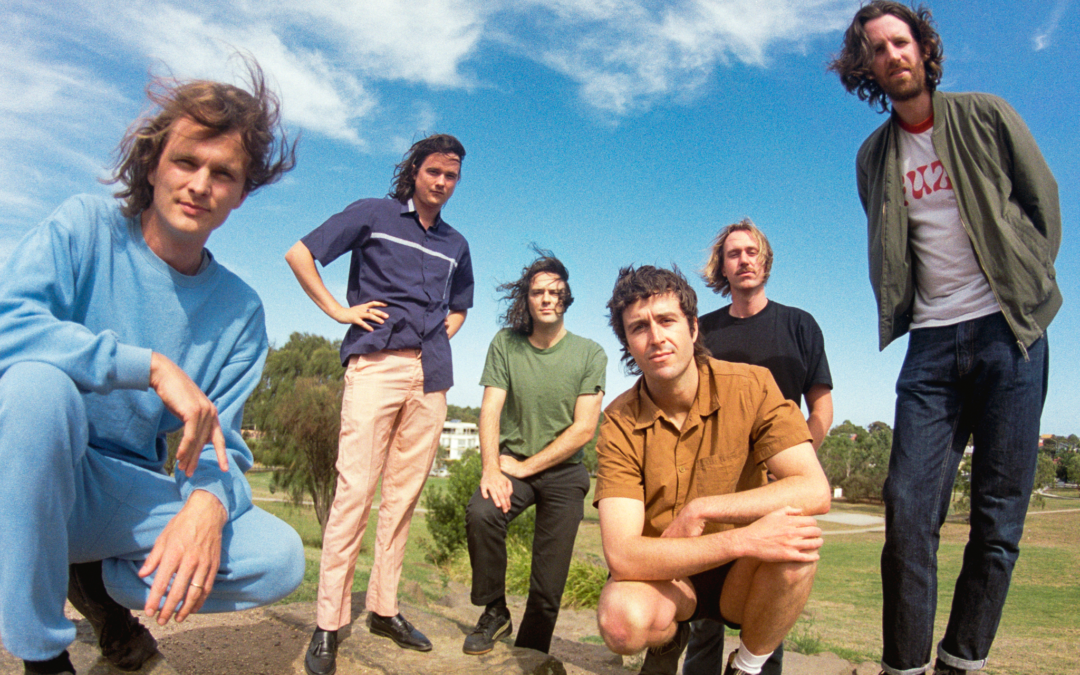 Australian Psych-rockers King Gizzard and the Lizard Wizard had yet another prolific year in terms of official album releases. The band previously released 5 albums in 2017, and now 5 years later they repeated the madness. There’s plenty of smaller releases peppered throughout as well like their collaboration with TFS (Tropical F#$% Storm) entitled “Satanic Slumber Party”, or “Butterfly 3001”  a compilation of remixed tracks from  their 2021 dreamy synth album “Butterfly 3000”. The open water of the “Gizzverse”  is quite deep if you are a new fan but you can find plenty down there which an exciting prospect. The five albums released this year are all different and not at all equal, and I want to be your guide in describing and ranking them.

This secretive album was actually only meant as an exclusive release for those fans lucky enough to attend the band’s Timeland Festival, which was subsequently canceled. In response King Gizz made this album available for exclusive purchase on a 45rpm vinyl, then in 2022 they decided to gift the album to the public. This album is a richly textured collage of sounds and genres all seamlessly tied together, with only two 15 minute songs. It’s an exploration of many genres including but not limited to jazz, EDM, classical composition, and even some rap verses. I wouldn’t consider this an album of songs, but more of an experiment in recording, much akin to The Beatles manipulation of musique concrete. A journey and descent into Timeland.

Another of the band’s secret albums of the year, this album was premiered as the set break music at their Red Rock’s Marathon shows, and was released on Bandcamp first. Lucky concertgoers got a chance to purchase vinyl with a real denim jacket as the packaging. This album is a sequel or possibly even prequel to Made in Timeland it seems, although this time we get two very real songs with certain structure. The two songs “The Land Before Timeland”, and “Hypertension” are again 15 minute meant to complete each side of the record. Where the first track has a throwback to the chilled out and whimsical stylings from their 2013 album “Paper Mache Balloon”, the second track recalls the deep and hypnotically intoxicating sounds from 2017’s “Polygondwanaland” with plenty of polyrhythmic challenging drum parts via drummer Mickey Cavanaugh aka Cavs. Overall I loved the release and its daring lengthy jams, but it didn’t offer as much as some of the other albums and seems like more of a “side-quest” of sorts.

The first official album offered up in 2022 was Omnium Gatherum. During the previous album “Butterfly 3000” the band was recording separately in their own quarantines, and on Omnium Gatherum it seems like they are excited to be together again. Out of the gate the first track “The Dripping Tap” is 18 minutes of searing riffage, bookended by their keyboardist/harmonica player Ambrose Kenny’s distortion drenched soul vocals. The album takes many twists and turns after that, with each song really taking the listening to a new place. It goes from the dream-poppy “Magenta Mountain” (one of my faves), to the metal dirge of “Gaia”, which very well could’ve been an extra track from their “Infest the Rats Nest” album. Quirky songs like “Ambergris” and “Garden Goblin” stick out as some new but also somehow simultaneously familiar territory for the band’s guitarists/writers Joey and Cookie respectively. Tracks like “The Grim Reaper” and “Sadie Sorceress” give the band some serious bars and both sound like they could’ve been from The Beastie Boys’ “Check Your Head” sessions. My only problem with the album as that around the halfway mark, it seem to rely on some concept driven and thematic songs like “Red Smoke”,  “Candles”, and the instrumental soundtracky “The Funeral” that just kind of saunter off into an unideal and underwhelming ending for me. If you like the ADD driven genre bending that this has to offer, you will also like 2017’s  “Gumboot Soup”.

It was really hard to decide which albums would be #1 and #2. “Changes” was the last album to be released this year and according to the Lizard Wizard himself, Stu Mackenzie, it was conceived and created over a 5 year period on the road. This is unique for the band’s fast batch writing and recording style, but according to Stu some of the melodies were elusive. As a musician I hear this record and understand why its concept may have sent them for a loop, the literal changes or chords of the 13 minute opener “Change” are constantly modulating in an angular movement, opening up some simple chord progressions into dense voicings that give you a shimmering jazz lounge effect, but somehow building up to a big rock moment. Fans of their albums “Sketches of Brunswick East” and “Butterfly 3000” will get a lot out of this one. “Hate Dancin'” continues the theme of Changes and doesn’t offer much more for the listener, but it’s a cute song. “Astroturf” has an infectious alien-like toe tapping nature, with squashed horns and an indescribable funkiness, whereas “No Body” is an eerie ballad of metaphysical longing. As the album proceeds,  “Gondii” brings more darker thoughts and concepts to life through the analog synth overtones, and smoothly sneaks in some of the themes and melodies from the first track. This is obviously a full on concept album musically since “Exploding Suns” brings back the existential and dramatic vibes from “No Body” which shifts right back into the extra-terrastrial MIDI-rock outro music of “Short Change”, repeating themes throughout. The first letter of each track title spells out the albums name “CHANGES” so we have a well thought out concept album on our hands, crafted over 5 years by these well-trained musical psychonauts.

Recorded with the same collective writing efforts as “Omnium Gatherum”, this album was released as another 2022 double-LP release from the 6 piece Australian masters of music. This time they found themselves in a session with nothing but some pre-picked keys, tempos, and open structure, which in no time turned into an album of some very lengthy songs filled to the brim with ideas and energy. “Mycelium” opens the album with a warm and child-like jam that would make any mushroom enthusiast grin from ear to ear. The second track “Ice V” was the single they released with a video in tow and proves to be one of the most compelling tunes. The funkiness of this track is truly infectious and it keeps barrelling along but also takes the listener on a journey to the center of mojo (think Quincy Jones on psychedelics predicting abrupt apocalyptic end due to the below freezing isotope, Ice V) . “Magma”, “Lava”, and “Hell’s Itch” continue this album’s study in everything King Gizzard, from hard jam aspects to jazzy swing, this choice cut sends the listener directly into an oozing primordial pit of what this band does best. They weave the aesthetics of other previous Lizard Wizard gems like the classic “Nonagon Infinity” with some of  their early sounds from “Oddments”, and a bit of everything else. But even with some previous influences shining through, this album somehow also makes its own splash as a new way for the band to conceptualize their own music. “Iron Lung” is a reminder of what makes them so good at writing hooks, the song has a loungy vibe but progresses into a hard hitting jam that builds. The flute and saxophone strewn throughout this album really gives it that organic breathiness that makes it all seem too real. “Gliese 710” ends the album with a section of lyrics that sums up the passionate seance that the band is performing on us. The instructions are simple: “Melt the ice, reheat the dead, terraform the planet, compress the lungs, eat the mushroom, cool the lava, watch the new star dance upon the night sky”.