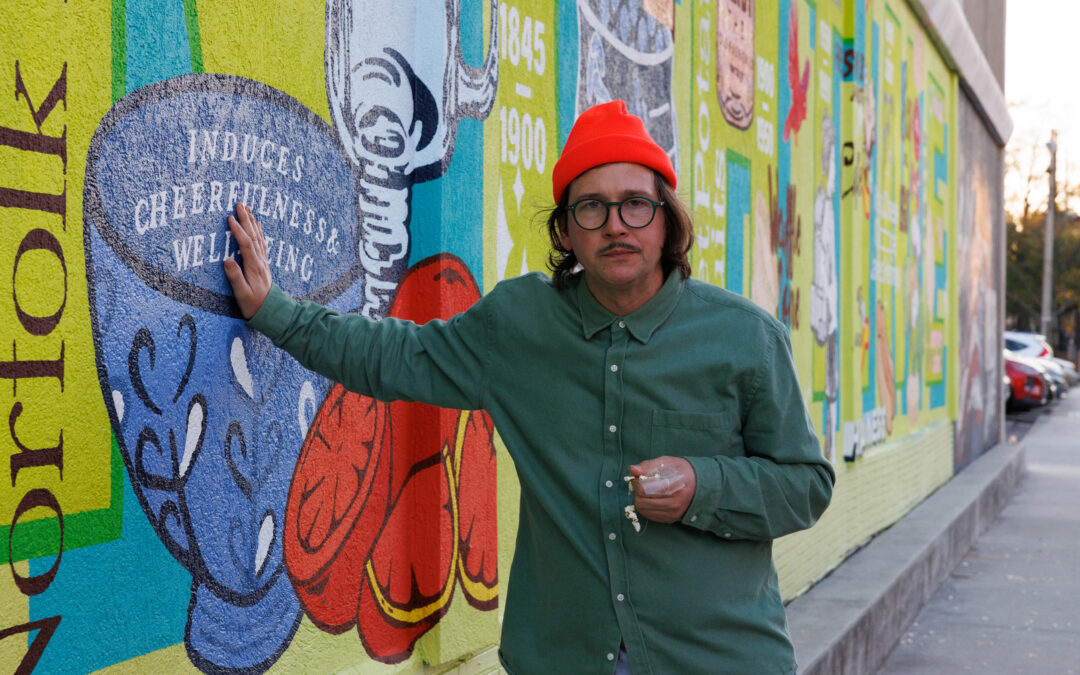 Look beneath the surface of most community murals and there you will find a rich backstory—a stew if you will—of historical context and contemporary perspective.  The newest mural in Norfolk’s NEON district boasts that and more.  Led by both stateside and UK teams of professionals, now friends, Gourmandizing NEON is a journey of a thousand bites that started with one small nibble.

On the last day of the year in 2021, noted London-based artist, Matthew McGuiness, with family ties to Norfolk, reached out to Rachel McCall, Vice-President of the Downtown Norfolk Council (DNC).  The DNC is a private not-for-profit membership organization comprised of businesses and individuals working toward a dynamic attractive and prosperous downtown.  His query was simple:  was there room for him to contribute to the growing vitality of Norfolk’s first official arts district?  His idea centered around a mural about food—particularly lunchtime in downtown Norfolk—that would be created in collaboration with a group of teenage artists.

McCall took the bait, did her due diligence, and liked what she learned about McGuiness, including his Gourmandizing London project. Based in that city, Matthew McGuiness—with specialties that span the spectrum—is an internationally-collected and sought-after artist (hello, Tate Britain) and multi-disciplinary designer who has a sweet spot for branding and has directed and founded too many programs to name.  His public art and murals boast a distinctive visual language of imagery and typography, though he claims to be a sign painter “hack” who specialize in, among other things, emotional wayfinding.

Before long, McCall was sitting in a studio at The Governor’s School for the Arts (GSA), a regional program serving eight Hampton Roads school divisions, discussing the project with director, Deborah Thorpe, and visual arts department chair, Liana Courts.  Courts stepped up with an offer to create and teach a two-part course around the concept with a mural on the Olney Road-side of Virginia Furniture as the capstone project.

In the fourth quarter of the spring of 2022, ten GSA student artists, working as “innovation partners,” met virtually twice a week for six of the 9 weeks with McGuiness and his partner Addiel Dzinoreva “Dzino” zoomed in from England.  Each student pair was assigned a swath of time between 1785 and 2022 to research.  Their deep dive began in the Sargeant Memorial Collection at Slover Library perusing old cookbooks, magazines, and articles, and continued as field research.  Initially shy about interviewing NEON businesses and residents about lunchtime food memories, the young artists warmed to their charge with collected quotes, anecdotes, recipes, and imagery from those interviews and the students’ own families referenced in the final design.  Throughout the process they learned more about the creation of mood boards, murals, and how to draft a public art proposal.

After collecting their research, the students were tasked with creating mood board collages which they presented to Courts, McCall, McGuiness, and Dzino for both in-person and virtual feedback. Then the students had to step away and trust the process.  Over the summer, the London team synthesized the students’ narratives and drawings into a final mural design.  McGuinness and Dzino “printed all the student files, sat in a war room, and chopped things up.”  They then made collages from all the pieces in search of a visual thread, which McGuiness describes as “arduous,” given that they had to “wrangle” ten different student voices.

The ultimate design prominently features the titles of regional culinary mainstays like Chesapeake Bay Oysters, Doumar’s Ice Cream cones, Duke of Norfolk punch, H. E. Williams Candy Company, and, of course, Smithfield Ham.  The word “Lunchtime” serves as the visual scaffold for the mural.  McGuinness recounts that they played with the word, “Happiness,” which kept percolating up in phrases like “a recipe for happiness,” found by student, Abby Elliott, in a 1950s church cookbook, but they couldn’t get it to work.

Several color routes were proposed, but the students unanimously chose one inspired by an Australian cartoon called “Bluey” that Matthew was watching with his kids during the span of the project.  A Benjamin Moore color matching app helped ensure the food-named colors—Apple Candy, Chocolate Sundae, Oklahoma Wheat, Roasted Sesame, Blackberry, Peppermint Leaf and Pancake Syrup—were true to the original vision.

On the Saturday I visited in October, Courts, McGuinness, and Elliott were hard at it but generously and enthusiastically engaged with me about their work.  The mural was entirely mapped out, thanks to a pouncer attached to a plotter printer, and the artists were hand painting assigned sections.  Elliott explained that she and her partner, who researched 1950-1990, worked from magazine and internet images, collaging them together.  They interviewed at the Hummingbird Café where they were told about a customer coming in with a bird in a cage on her back—“Working here is like watching a movie” they were told—which made it into the final mural design.

An artist in her own right, having been commissioned to create two paintings for CHKD’s Pediatric Mental Health Hospital, Elliott found the research for Gormandizing the most challenging, as she does with most anything, noting that the old recipe books were difficult to locate.  Plus, she found it “a little intimidating to talk to people you don’t know at first, but it became really fun.”  However, the most enjoyment was out on the street painting the mural, conversing with curious passersby, and “putting our artistic skills to work.”