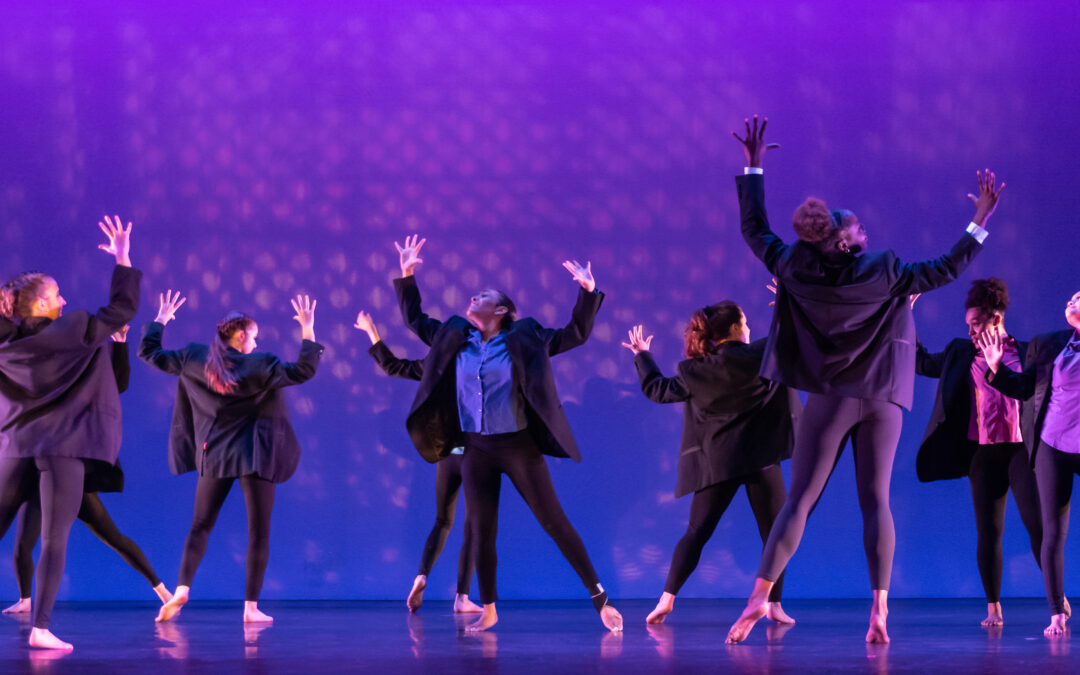 Learning a dance is a lot like playing a game of telephone: movement leaves one body and is passed to another, transformed by that person’s anatomy and style, and then transmitted and transformed again, and again. For Eli Motley, a choreographer who has a new duet in the University Dance Theatre concert, taking place November 16 to 19, this transmission of movement is incredibly profound. The duet is danced by James Morrow and Megan Thompson, faculty members at Old Dominion University, where Eli was a student from 2013 to 2017.

Asked about the process of teaching his own instructors, Eli admits, “It was freaky. Yeah, it was weird. Usually, as a performer, I enter a rehearsal and wait for direction. This time I realized, Oh, I am the director.” Megan, currently the director of the ODU dance program, was Eli’s “first dance teacher,” and significantly influenced his approach to moving and creating.

James was not yet a professor at ODU when Eli was a student, but co-founded and choreographed for Chicago Dance Crash, where Eli was a performer from 2017 to 2020. James is an acclaimed teacher of hip hop and Eli is currently researching how street dance cultures, like Breakin and House, evolve. As a graduate student at the University of North Carolina Greensboro, Eli, now 28, will complete his degree in 2023 and is already applying to teach dance in universities.

Reflecting on the role-reversal of creating for Megan and James, artists who have choreographed on and taught him, Eli says, “It was really fun and interesting. I got to see how the movement that I create was influenced by these dancers, and then bring it back into their bodies. There is a Breakin section in the duet that James is great at and then there’s a traveling phrase that reminds me of Megan’s choreography.”

The duet is not narrative but does evoke ideas about transmission and transformation. “My initial thought, going into the process, was, How do I manipulate what they taught me, years after I have had these deeply influential experiences with them, and see how my movement is reflected back on their bodies,” says Eli. He pauses for a moment and adds, “I was not disappointed at all.”

The duet is one part of a multifaceted performance that is offered five times at the University Theatre. Besides the duet by Eli, every dancer in the show is an ODU student. Other choreographers in the performance are ODU faculty: Vicki Fink, Davianna Griffin, Lauren Sinclair, and Janelle Spruill. In addition to performing, James Morrow has also choreographed a piece. This event, called University Dance Theatre (UDT), happens every fall and spring semester, with new choreography every year, and the audience is made up of local residents, ODU faculty, students, and performers’ families.

The UDT experience distinguishes ODU’s dance program: students perform a range of dance styles. Each semester a guest is brought in to widen students’ knowledge of dance and its different forms of expression and communication. Eli has many fond memories of performing in UDT as an ODU student.

Asked what stands out the most, he recalls working with guest artist Li Chiao-Ping, a choreographer who is internationally respected for her craft, athleticism, and story-telling through dance. “There was a piece called Go,” Eli recalls. “It was very, very hard, very rhythmic, and, originally, entirely performed by women. I didn’t realize that until we got to the costume fitting and the I found out I was the first guy, or male-identifying person, to be in the dance. I thought the costume would accommodate this gender shift but no! And the costume was a tutu, a bra, underwear, and combat boots.” Eli laughs at the memory.

“We are rolling up on Tech Week (when dancers rehearse on stage), and then we’re performing, and during the Saturday night show, my parents are in the audience. In the middle of this piece, I hear my father say loud enough for me to hear on stage, ‘Well, that’s my son. That’s Eli.’” Asked if there was any follow-up discussion with his parents, Eli responded, “No. They just said, ‘Wow, you really sweat it out when you are on stage,’ and I do.”

For Eli, and other ODU students, dancing is as much about self-discovery and self-knowledge as it is an athletic and physical pursuit. It is rare among universities for students to study a spectrum of techniques––from modern to jazz, and ballet to hip hop––while also discussing creative processes, histories of dance, and the importance of dancing for health and wellbeing.

Since graduating from ODU, Eli has worked with renowned dancers, choreographers and directors like Rennie Harris and Ohad Naharin. He says he’s inspired by the inquiry, Who is dancing for? “A question I have been thinking about a lot these days is, Am I dancing for you or am I dancing for myself? Like, What is applause for? Even when I am doing a solo, I think, Is this for me or for them?” These questions seep into his process of creating and performing, describing it as a “dialogue” between performers and audiences as well as dancers and themselves.

Each time a movement is performed, it is influenced and inflected by our bodies’ capacities, our thoughts, and our environments. For Eli, this makes dancing endlessly fascinating and educational: it is a practice of becoming better versions of ourselves.  He hopes that audiences will appreciate the duet as a form of communication about our world, our interactions, and what we notice and value. Eli notes that each of us has a profound impact on people around us, and he thanks Megan for instilling a love of dance.

After performing in many works by Megan and being a student in her classes, Eli received a graduation card from her that he still has. It says, “I look forward to the day when you will choreograph on me.”

Kate Mattingly is an assistant professor in the Department of Communication and Theatre Arts at Old Dominion University. She joined the faculty in 2021 and never taught Eli and is not involved in this semester’s UDT performance. She has written about dance for the New York Times, Village Voice, Dance magazine, Pointe magazine, and academic journals.