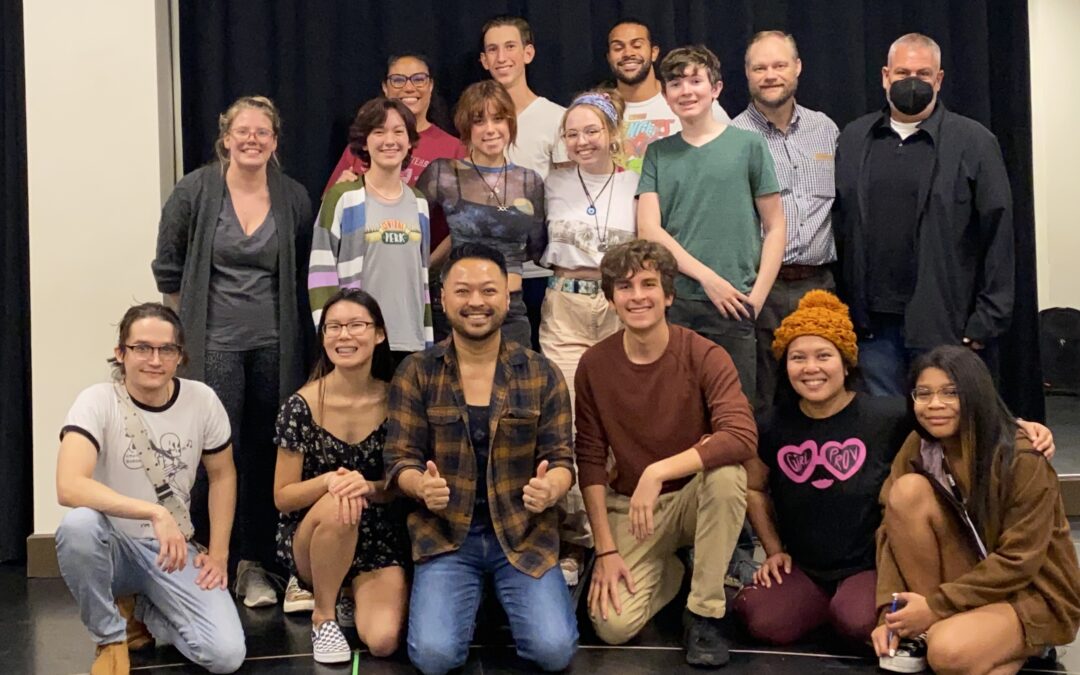 “The thing I love most about our cast, is that every single person in this cast lives in Norfolk,” says Billy Bustamante, a New York City based theatre artist who is in town to direct Virginia Stage Company’s production of The Hobbit, the latest show in the company’s ambitious 44th season. “I’m thrilled to be creating a community on stage that is truly reflective of the community of Norfolk.”

It is indeed quite unique for a VSC production to feature all locally based actors. As our area’s premiere fully professional theatre company, VSC productions generally feature Equity actors who are based in NYC, many of whom regularly work on and off Broadway. However, this production of The Hobbit is being presented in collaboration with The Governor’s School for the Arts, and indeed over half of the cast members are GSA students. “We’re very purposefully holding up the educational process and experience, with this professional theatre making experience,” says Billy, regarding the collaboration between the show’s professional actors and its student actors.

Billy Bustamante is not new to the Wells, as he previously worked as choreographer and associate director of VSC’s production of Roald Dahl’s Matilda the Musical, back in 2019. He is new, however, to directing plays—a fact that he shares with me during our chat earlier this week, inside the storied theatre itself. There is a bit of hustle and bustle going on around the stage, as this is the 2nd week of rehearsals for The Hobbit, the J.R.R. Tolkien literary classic, which has been adapted for the stage by Greg Banks.

“I am a musical theater guy through and through, and The Hobbit is a play essentially,” he says. “While it is a play with music, it is a play. It is very rare that I, as a musical theater person, get a chance to approach plays.” He admits to some early trepidation because of it. “When I got the call, I was thrilled, excited and terrified.”

That call would have likely come from Tom Quaintance, VSC’s producing artistic director, who goes way back with Billy, to their shared days collaborating at Cape Fear Regional Theatre. Tom was also the director of the aforementioned Matilda, which also featured GSA students. He clearly believes in what Billy can bring to this play’s telling. “I think the points in which The Hobbit and my aesthetic intersect—is in the strong sense of ensemble, and community storytelling…and a strong sense of theatrical magic…that doesn’t necessarily mean theatrical, technical bells and whistles,” says the director/choreographer, who is also a noted performer in his own right.

Don’t expect a big, dazzling spectacle kind of telling of The Hobbit, despite the scale of the story and the big-budget fantastical movies that the work inspired. “Everything feels very low-tech and theatrical, in the old school sense of the word,” he says. “So the version of The Hobbit that we are trying to create, is a version that is purposefully unlike anything you’ve seen before.”

The Hobbit began as a best-selling and critically acclaimed children’s fantasy novel, originally published back in 1937. Published before Tolkien’s most famous work, The Lord of the Rings, the novel introduces the world to now iconic characters like Bilbo Baggins, the actual hobbit protagonist of the story, and Gandalf, the wizard who influenced him. The hobbit’s search for treasure and connection to home, has inspired generations of young readers, and their adult parents as well. The novel has sold tens of millions of copies at least—and has spawned blockbuster movies, stage adaptations, and many other forms of media, in the wake of its massive success.

“Tolkien was a visionary,” says Billy. “He created a story, so many years ago, that spoke to our very current human circumstance.” The director sees many parallels between certain characters and species within the story, and modern life—especially in terms of struggle. “Every day of rehearsal, we find new parallels and intersections, from what Tolkien wrote about…this magical world, to our very current reality. That makes me so excited to work on it,” he adds.

Featuring a cast of eleven actors, VSC’s The Hobbit seeks to challenge audience expectations, in terms of both its staging, and in its casting. The issues of equity and representation are very important to Billy, and where applicable—they do inform his artistic choices. “I personally believe it’s my mission to expand and include, who gets to tell stories,” he says, rather passionately. “My intention and hope is that we can provide an experience that challenges everyone’s expectations and assumptions.”

The diverse cast includes Jeffrey A. Haddock as Bilbo, actors Ryan Clemens, Thomas Hall, and Alana Dodds Sharp, portraying various roles, and a number of GSA students in the ensemble. The set is being designed by Josafath Reynoso, while Jeni Schaefer is designing costumes, per usual. And music in the play is composed and directed by Jamison Foreman.

“The Hobbit will make you laugh, make you think, make you dream, and it will remind you that we are not alone,” says Billy, when asked why patrons should come see this show. “All these unique individuals come together, to collectively tell a story that we all know and love, in a completely different way.”

Based on The Hobbit by J.R.R. Tolkien

Adapted for the stage by Greg Banks