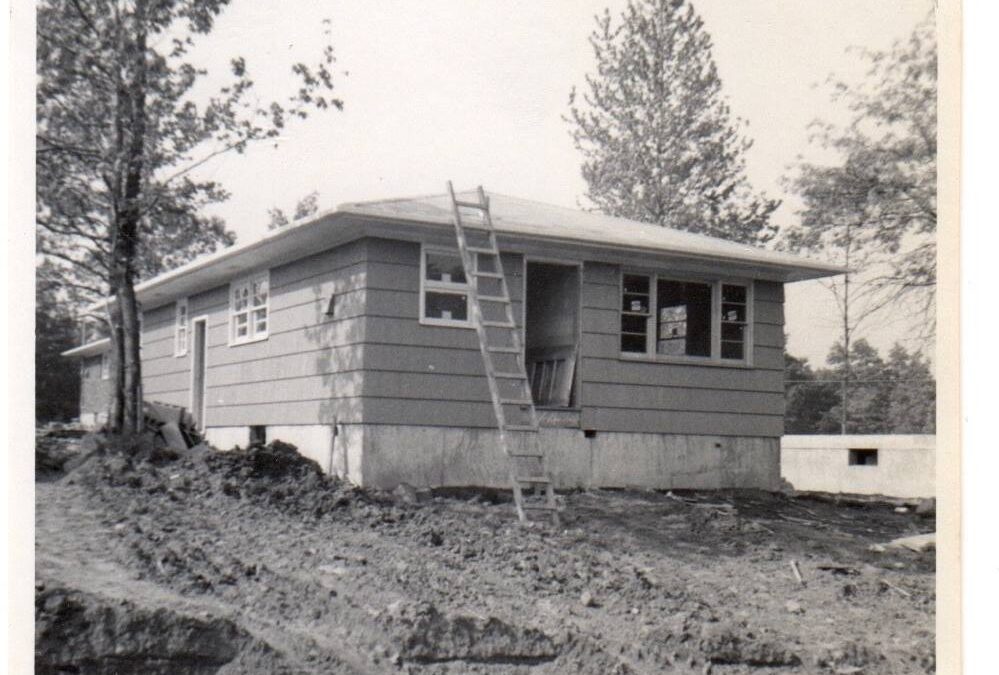 (My childhood home, shortly before my family moved in, in 1959.)

During this summer’s heatwave, when I stayed home as much as possible, I spent a few afternoons binge-watching The Andy Griffith Show. I loved the program when it aired in primetime, beginning in 1960, and to my mind it’s lost none of its charms. Every episode remains funny and heartwarming.

In many ways, the lifestyle depicted in the show also reminds me of my own childhood. Given that I grew up in Staten Island, one of New York City’s five boroughs, that may seem like an odd thing to say. But it’s true. My earliest years were as simple and free as Opie’s.

It all began shortly before my 3rd birthday, when my parents bought a modest three-bedroom house in a new development just north of historic Richmondtown, which boasts a number of preserved Colonial-era buildings including the oldest standing schoolhouse in America. When we moved in, the street in front of our house wasn’t even paved, and was surrounded by woods on three sides.

At some point that summer, my mom met one of our new neighbors and learned that the woman also had a 3-year-old boy. His name was Charlie. Shortly thereafter, they got us together—but not for a “play-date” in the modern sense of that term. My mother simply pointed to Charlie’s house and told me to go see if he wanted to play. His mom, in turn, told us to go out and have fun. For the next hour or so, we roamed through the woods without a care in the world. I remember, in particular, stopping to examine some berries on a bush.

“My father said we’re not supposed to eat those,” Charlie said, and I took that to heart. Instead, we just squished them between our fingers, until our hands were stained with purple juice. After a while, we walked back to Charlie’s house, where his mother made us peanut butter and jelly sandwiches.

Over the next few years, I learned a lot more about the local flora—and what to avoid, such as poison ivy. My dad, who sometimes took me on walks, taught me a lot, but I also learned a lot from friends—who’d learned from their fathers—as we rambled freely without adult supervision.

By the time we were 6, Charlie and I were venturing farther afield. I remember one summer afternoon, in particular, when he and I walked about a mile to a friend’s birthday party on Lighthouse Hill, one of the highest points on the Island. Ten minutes or so into our walk home, a man stopped his car and offered us a ride. As it happened, we had just recently had the don’t-take-candy-from-strangers lesson in school. It obviously stuck because the moment the man spoke to us, Charlie and I looked at each other and, without saying a word, tore off into the woods and didn’t stop running till we got to Charlie’s house. Breathless, we haltingly told his father what had happened.

“You did the right thing,” his father said without a hint of alarm. Of all people, he certainly would have been aware of the potential danger we’d faced. He was a cop. I suspect his show of nonchalance was for our benefit. Why scare us by blowing the thing out of proportion? We’d obviously learned our stranger-danger lesson well.

I DON’T MEAN TO SUGGEST that Charlie’s parents—or mine—were indifferent. One Saturday, when we were about 7, Charlie and I and four or five other boys dug a tunnel through the side of a small hill, burrowing about eight feet horizontally, then about three feet upward to make an exit. We spent the next hour pretending we were in The Great Escape, which had just come out, oblivious to the danger. A few hours later, when Charlie’s dad got wind of this, he walked over with a shovel and caved the tunnel in, pointing out that it could collapse while we were in it.

We faced other dangers as well—notably in the half-constructed houses, which we explored on a regular basis. One day, Charlie and I, along with our friend Jimmy, climbed into one of the basements, which was filled with about two feet of water, and took turns floating around on a piece of plywood. After tiring of that game, we decided to climb back out, via the make-shift workman’s ladder that we’d used to descend. Charlie went first, then Jimmy—then they pulled the ladder up, leaving me stranded. After laughing and teasing me for a minute, they lowered the ladder again. I was momentarily upset, but quickly got over it. There was a lot of teasing among us in those days—and the occasional fist-fight/wrestling match when tempers flared, but we had each other’s backs when anything serious happened.

Mostly, we just roamed in those woods, catching toads, frogs, salamanders and the occasional snake—or playing “army,” chasing each other through the hilly terrain and “shooting” each other with sticks that we pretended were guns. The goal was to avoid getting shot, but I liked pretending I’d been hit and tumbling down a hill through the fallen leaves.

For the first two years of school, we also walked or rode our bikes a mile or so to what was quite literally a little red schoolhouse, with just three classrooms. By the time we were ready for third-grade, though, the city had cleared the woods behind our street to make way for a large new elementary school. It was nice to be able to just walk around the block to school—nicer still, to have a large asphalt playground, where we could play basketball, stickball and a game variously called skully, skelly or skelsies, which involved flicking bottle caps filled with wax or melted crayon on a chalk-drawn board. No adult ever taught us this game. Somehow, it had just been passed down through the generations, as if by osmosis.

Our parents were around to help us if we needed them—or give us quarters for the Good Humor truck—but during weekends and summers we generally only saw them at breakfast and dinner—or the after-dinner TV shows, like Andy Griffith and Gunsmoke.

“Just make sure you come home when the street lights go on,” was the common refrain—which, in the summer, meant going back out for a couple of hours after dinner.

My sense of independence was cultivated in Manhattan as well. According to my mother, I was just 18 months old the first time she took me into “the city,” as we called it. I don’t remember that trip, but I recall many others from age 3 onward. One moment in particular stands out in my mind—a lesson my mother taught me about riding the subway.

“If we ever get separated for any reason, and you’re left on the train,” my mother said after we’d pushed our way through the crowd, “just get off at the next stop and wait there for me.”

That certainly was not out of the realm of possibility, as you well know if you’ve ever tried to navigate the chaos of incoming and outgoing passengers on a busy New York City subway car. Her instructions, delivered in a calm voice, reassured me that I was equipped to deal with that scenario, should it ever arise. As a result, by age of 6 or 7, I was as comfortable on the subway and in the streets of Manhattan as I was in the woods near my house. By the time I was in middle-school, in fact, my friends and I were venturing into Manhattan on our own, to wander around Times Square or catch the 7 train to Shea Stadium. Never once did I feel unsafe, and I don’t think that was naivete. By the age of 12, my friends and I had a fair amount of street smarts.

REFLECTING ON ALL OF THIS, I’m struck by how much childhood has changed. Curious to verify this impression, I recently posed a question on Facebook, asking parents of young children if they ever let their kids go out unsupervised.

“God, no!” one responded. “My kids are never out of my sight.” Most of the other responses were similar. One parent even said she won’t let her 13-year-old go off without adult supervision.

People closer to my age recalled experiences similar to mine but said, “Times have changed.”

Clearly, they have in a whole lot of ways, and not just with regard to adult supervision. The pervasiveness of technology stands out.  I have come to rely on it as much as anyone. I enjoy my streaming services and my iPhone, and I couldn’t do my work without the Internet. I also use Facebook, both for diversion and information, as noted above.

That said, I’m awfully glad that none of this was around when I was a child. Video games didn’t exist (Atari didn’t introduce Pong until I was a sophomore in high school), and thank God for that. If my friends and I had had them, we would likely have missed out on all those stickball and skelly games, plucking bullfrogs from the muck, and tumbling through dead leaves.

I’m also grateful to have grown up with just six TV channels—the three networks and, in New York, three independents, which aired old movies every weekend. Because I was stuck with limited choices, I discovered through those channels an abundance of film classics, from High Noon to Duck Soup. In today’s environment of unlimited choices, one has to seek things out—and I doubt I would have done so, at least not as a kid. WPIX curated them for me.

I’m glad as well that we didn’t have cell phones. There was something almost inexpressibly liberating about being wholly out of touch from our parents for hours at a time—liberating and educational: without adults, we had to learn on our own and rely on our wits, as Charlie and I did at 6 when we eluded that stranger.

Most of all, I’m glad there was no social media. It sometimes messes with my psyche, even now. I can’t even imagine what it does to the mind of a 10-year-old.

Yeah, I know what some of you are thinking: I sound like an old man who loves to yammer on about how much better things were when I was a kid. It’s a mixed bag, for sure. When I was quite small, our family sedan had no seat belts; moreover, I’d sometimes lie on the platform below the back window. One day my father had to jam on his brakes, and I flew onto the floor, banging my head on the hump. Seat belts and car seats are surely a mark of progress.

I also wouldn’t presume to tell today’s parents how to raise their children. Every generation has to do that in accordance with their own values and sensibilities. Maybe the world has become too dangerous to let kids roam free. If so, that’s a sad commentary on our society—but we all have to adapt to current realities.

I simply offer these reflections for anyone who cares to consider them. It seems to me that a large degree of freedom in childhood is important as a way of learning to make good decisions, settle disputes and have faith in ourselves. I’m glad, at any rate, that I grew up when and where and how I did.