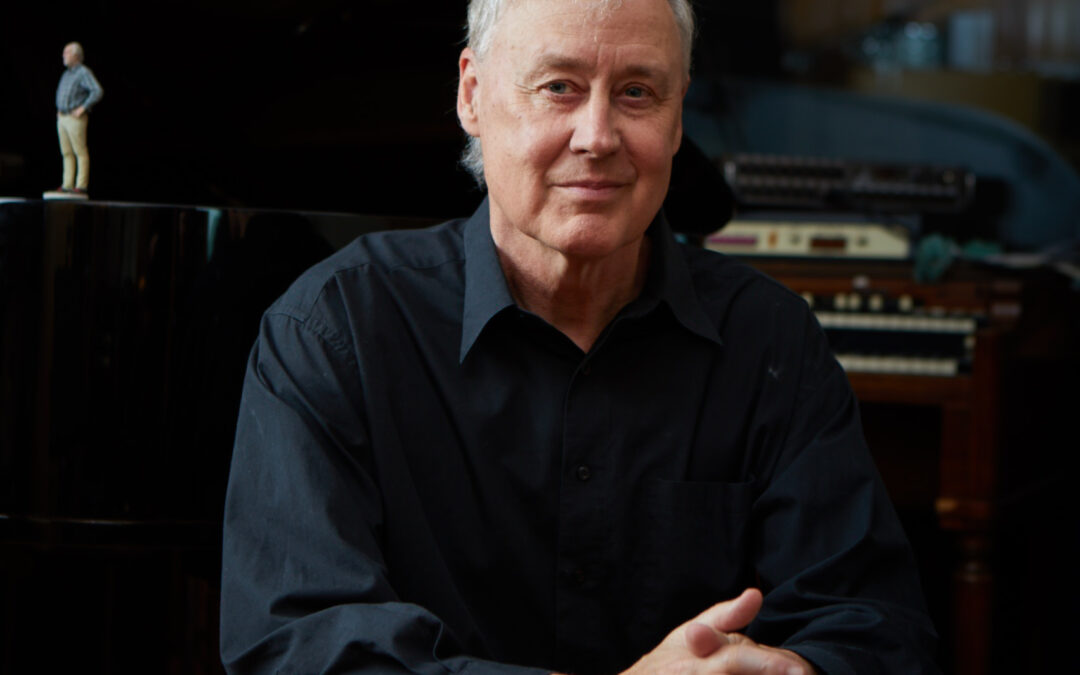 Bruce Hornsby, the Grammy Award-winning musician from Williamsburg, is in the midst of the most prolific phase of his career, releasing three solo albums over the last four years. While he still tours with his band, the Noisemakers, on Nov. 4, he’ll perform a solo show at the Ferguson Center for the Arts in Newport News. Here are just a few of the many highlights from a recent conversation with Veer Magazine.

What’s it like to be touring again after COVID?

The situation in the world plus my fecund years lately were sort of a double whammy—a twin punch that made it hard for my band. We didn’t play for a good, long time, and then I inflicted three albums of 32 new songs for them to learn. We weren’t doing it well for a good while. … Two Junes ago, we did a little run in the Northeast—mediocre at best. And then we did another run in September and got a little better, but only about half and half. The spring came—same thing. This summer came—same thing. We were not at full strength in our abilities. But then in August, I’m happy to report that we pretty much stormed through the West, and everything came together. Everyone had worked a little harder on the new music and paid a little more attention to detail, and all of a sudden—wham! Every night was semi-transcendent.

I didn’t realize it had been so long since you’ve played the Ferguson Center. Coming back after a long break, will you do anything special—with it being a hometown show?

When you play solo, you can really do anything.

As the Troggs would say on the classic Troggs tape: “There’s just one f***ing mind on it.” If I think I’m not doing well—if I think I’m sucking on said song—I can pivot and maybe turn it into a medley and move, hopefully deftly, into a new one. As far as being able to play 120 different songs of mine with the band, I think we played 95 this year on our tours, which was a good number, but I’m able to do more solo—for obvious reasons. If I know it, that’s all I need.

I want to talk about lyrics. When I listened to “‘Flicted,” in one song you say, “solipsistic reverie,” which is beautiful and high-minded, and then in the next song, you rhyme “sh** his pants” and “cotillion dance.”

That’s right! I have the beautiful word schadenfreude in that same song.

So where do your lyrics come from? What is your writing influence?

Well, I’m an inveterate reader. I’m slow but steady. And my retention level may be suspect, but I’m ever interested. I take a lot of inspiration from the reading that I do. And the last few records have dealt here and there with lyrics coming from the science world. And that’s just because I have an interest in physics. I’m interested in what’s going on at the Large Hadron Collider in CERN, Switzerland, for instance, and the Higgs boson. I could just keep going; I’m just interested in that.

Since my songwriting page is pretty filled in on a subject matter level, I’m ranging farther afield these days—for several years now—and finding new areas in which to deal. So that’s fun. I’m not one to want to repeat myself musically or lyrically, so that leads me to new places. So if I’m dropping the word eschatological, it’s just because it comes into my head!

I used to sort of curb my vocabulary when in public conversation, because the word that would come to me would be something that maybe, coming out of my mouth, would sound like I’m trying to be a big shot—trying to impress or something. So I would keep that at bay and look for a simpler word. Several years ago, I just finally said, “You know what? Enough of that. I’m just going to speak the way I think. And if this is the word that comes to me to use, I’m just going to use it.” So maybe there’s a relation in the songwriting to that to that idea.

I imagine you could live anywhere in the world you wanted to. Why do you choose to stay in Williamsburg?

You know, I went away for a good while. We had a band around here in the late ‘70s—’77 to early 1980. We’d made some contacts in Los Angeles, and from that, I was able to get my music out there, and 20th Century Fox signed me to a songwriting deal. It sounds more impressive than it was … but they signed me. So I moved out there in 1980 and stayed until 1990. But I did come back.

Simply put: I was OK with L.A., but I didn’t really love it. I just had a desire to move back. Simple as that, really. So I moved back because I’m a sentimental fool—or middle-aged fool at that time. I loved it when my sons went to the same elementary school that I went to. That was fun. And I had lots of friends back here who I reconnected with. There were lots of reasons to come back, and it’s been fantastic. I built a studio here, which has enabled me to not be the absentee father. Otherwise, I would have almost never been here. So yeah, we’re so happy we came back.

Next year is going to be a “Spirit Trail” 25th anniversary record that features a new CD called “Live Trail.” It’s a de facto live Noisemakers record. … Frankly, we could cull together something from just this past August West Coast run that would totally earn the right to be released as a record.

But I’ve been in this creative mode so intensely the last several years, and I’m still in it. I have a new record coming out next year. I made a whole record with the chamber group Y Music, and it’s so special. I’m so proud of it and excited about it.

Anything else you want to say about the Newport News show or anything in general?

I’ve said enough! Thanks for being interested in what I do. That’s really fantastic. I appreciate it.

Ferguson Center for the Arts