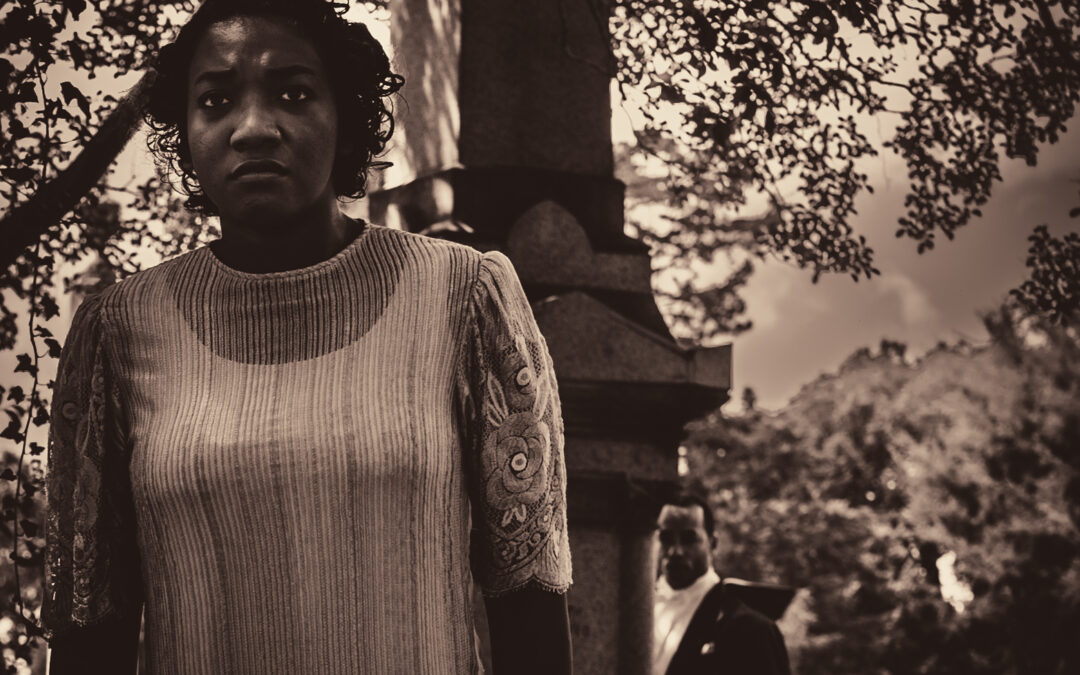 (Lucy with Dracula lurking in the background. Photo by J. Stubbs Photography.)

Sandra Epperson has directed “Dracula” three times over the last 50 years. If there’s one thing she’s learned, it’s this: “No existing theater company will allow you to cut a hole in their stage floor to create a trapdoor.”

On a more serious note—and in a preview of the playbill essay she’s writing for her directorial debut at Little Theatre of Virginia Beach— Epperson added: “This is a nostalgic look back at a time when the most terrifying thing in our world was a vampire. Because we have now gone through World War II, we’ve gone through the Red Scare, we’ve gone through fear of the bomb. Now we fear pandemics. … You know, we’re just we’re back scared again.

Epperson, a North Carolina native who moved to Virginia Beach during the COVID-19 pandemic, cast James McDaniel as Van Helsing and Tom O’Reilly as Dr. Seward.

“I’m thrilled to death,” McDaniel said. “This is kind of like a crime/drama-type thing, where you’ve got a villain that’s trying to perpetrate evil on other people, and you’ve got a detective-like character in the one that I play, who’s trying to find out who the perpetrator is, and then trying to identify him, and then trapping him and stopping him from doing his business. It’s fun being the good guy.”

“It’s one that doesn’t have wasted exposition,” he said. “It gives you the facts when you need them. It’s filled with actions that rivet your interest.”

O’Reilly, who graduated from the American Academy of Dramatic Arts and worked in New York and California before settling in Virginia Beach, said he is amazed by the quality of the performers at LTVB.

O’Reilly has high praise for McDaniel. “I’m really kind of thankful that I got Seward rather than Van Helsing,” he said. “His role is much more technically difficult. … He’s got longer passages, a lot more to do in the play—so much more complicated. It’s been a real pleasure working with him.”

And the actor playing Dracula? Epperson is guarding his identity as long as possible (though he does appear in some of the theater’s publicity shots).

“We’re not going to tell you who it is,” she said. “The guy who’s doing the role—he came up with it. He said, ‘How about if we just don’t tell anybody who I am?’ I said, ‘Well, they’ll find out at curtain call. He said, ‘If you’ll remember, Ms. Epperson, Dracula’s not taking a curtain call.’ So, we’re hoping to get some chit-chat going.”

Call it a compromise for not getting a trapdoor.

Little Theater of Virginia Beach will present “Dracula” through Oct. 2. Show times are 8 p.m. on Fridays and Saturdays and 2:30 p.m. on Sundays. Tickets are $20 for adults; $17 for seniors (over 60), active-duty military and full-time students; and $9 for children under 12. Discounts are available for groups of 20 or more. The theater is located at 550 Barberton Drive—off of 24th Street at the oceanfront. For tickets or more information, visit: ltvb.com.