757 Battle of the Beers Celebrates 10 Years in September 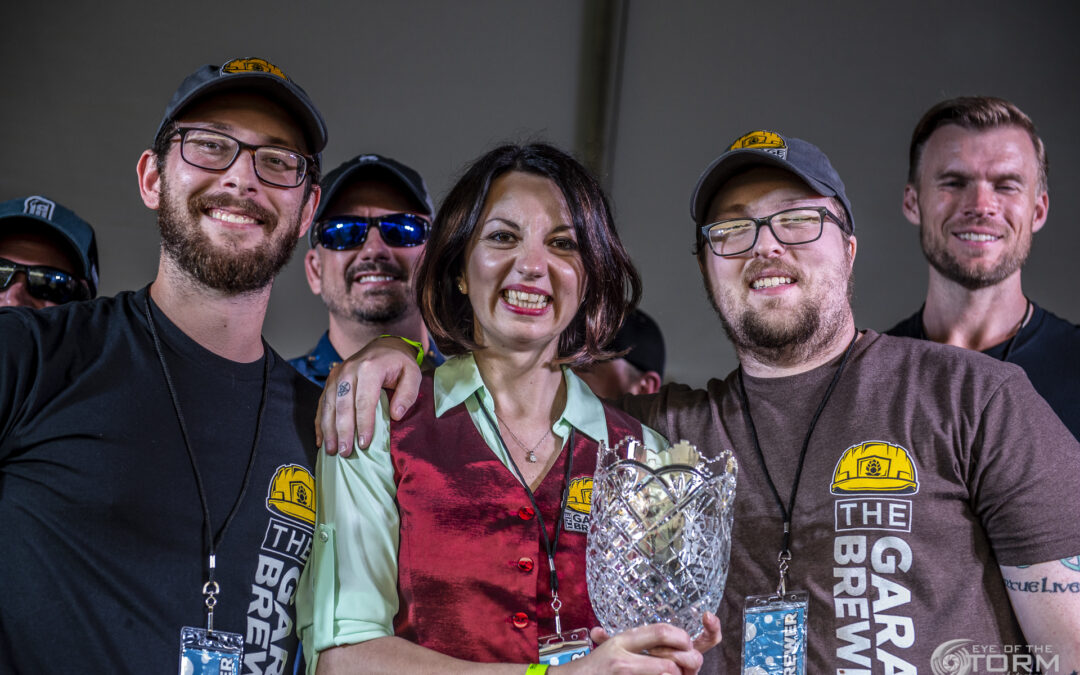 Over the last decade, craft beer festivals have come and gone in the Hampton Roads.

Today the 757 Battle of the Beers, celebrating its 10th anniversary on September 24, is the longest running beer event in the region.

The 757 Battle concept was developed by two Virginia Beach businessmen — Shawn Fischer and Andy Beale — who formed the Beach Ambassadors as a non-profit organization whose mission is solely to raise money for local charities.

“The concept came together over evening beer-storming, I mean brainstorming, sessions,” explained Beale.  “In late 2012/early 2013, craft beer was just starting to be a thing in Hampton Roads, and we saw how people were accepting of the movement early on.  There weren’t very many festivals out there that brought all the local craft producers at that time, and we decided the timing was right to showcase local beer and raise some money for charity at the same time.  The first event was held in early August 2013 at Tapped Gastropub in Hilltop and Alewerks, Back Bay, O’Connor, Beach Brewing (now Reaver Beach), Smartmouth, St. George and Young Veteran’s were the first participants.”

“By our count, 22 unique charities have benefitted financially from this event,” shared Fischer.  “Our charities St. Mary’s Home and Hope House Foundation, plus another 20 chosen by the brewers.  This year, we will add charity donations for 2nd and 3rd place category winners so the number of charities who benefit will certainly increase moving forward.”

The way charities benefit from 757 Battle of the Beers is multi-fold. The primary charities championed by Beach Ambassadors receive funds resulting from ticket sales and sponsorships. Each participating brewery has a named charitable organization they hope to help by winning one of the competitions — People’s Choice, Brewers’ Choice, and Battle of the Brewers.

For charities, the financial assistance is always welcomed and appreciated, but so to is the exposure and awareness the event brings to their non-profit organization.

“Inclusion for people with disabilities can be defined as a sense of belonging, feeling respected, feeling a level of energy and commitment from one’s community.  As one of the benefiting charities for this event brings all of this together and raises awareness to a large group of community minded people who understand the impact of true community inclusion. We are beyond thankful to be part of such a wonderful event,” said Elena Montello, Director of Development, Hope House Foundation in Norfolk.

Craft breweries have long taken great strides to help non-profits in their communities, and many say this is an important aspect of the 757 Battle of the Beers worthy of their continued involvement.

“For me it’s the main reason to be involved in a festival,” said Charles “Drew” Stephenson, owner/head brewer, Pleasure House Brewing of Virginia Beach.

“It gives meaning to the event and we love having the opportunity to support our chosen charity,” contributed the entire staff at Big Ugly Brewing.

“I’d say it’s an added bonus to the event, not only is it fun and exciting to have friendly competition but knowing that charity is a focus of the event makes all the work and effort for the event worth it,” shared Ulyana Wingard, founder, The Garage Brewery in Chesapeake.

“It would not be what it is as an event without the knowledge that it’s all for the benefit of some of our favorite charitable organizations,” agreed Jeramy Biggie, president, Commonwealth Brewing Company.

Elaborating further, Aaron Holley, owner/head brewer of Wasserhund Brewing Company, had this viewpoint to share: “This is one of the only events in the area that is completely charity based. Wasserhund opened on the idea that we should give money back to the community that supports us by giving 5% of revenue to local charities. We now do 30% of revenue from 5pm-10pm every Thursday. I can support any organization that is giving back to our Hampton Roads community.”

As for the beer competition aspect of the 757 Battle of the Beers, each of the 40-plus breweries exclusively from the Hampton Roads region enters two unique beers. A panel of selected brewers participate in a blind taste test to pick the overall best beers. This year there’s be a first, second, and third place in this Brewers Choice Award category.

The general public attending are asked to vote for their favorite in the resulting People’s Choice Award category.

Because of the nature of the events, the word “competition” hardly applies, and every in the end cheers on the winners.

“It’s an incredible opportunity to showcase your best beers, but most importantly it’s incredibly fun and really emphasizes that the 757 craft beer market is a true community,” said Wingard.

In total agreement, Biggie said, “This one brings everyone in the industry together in the spirit of friendly competition, but with a focus on helping others in need.”

Said Phil Shannon, National Accounts Manager, New Realm Brewing Company in Virginia Beach: “It is a rare opportunity to get together with all the breweries in the 757, try each other’s beers and share our passion for brewing with local craft beer fans.”

As for the recipe for success regarding the 757 Battle of the Beers, Beach Ambassadors co-founder Shawn Fischer shared this: “I think that the uniqueness of this event in featuring only local brewers and benefitting local charities has done wonders for keeping the event relevant and in growth-mode.  The growing local brewing landscape has also helped.  We really had no idea that the 757 could support more than 10 local brewers, let alone 40.  It is also super helpful that the brewers support the event directly by assisting in planning, ticket selling, and scheduling.  While certain distributors help us get ready for the event, it’s mainly the brewers who pull it off themselves.  This is unique in the beer festival world where festivals are typically unique to certain distributors.  With this, everyone seems to come together to make it happen.”

EDITOR NOTE: VEER Magazine is a continuing and active partner in the 757 Battle of the Beers.

10th Anniversary 757 Battle of the Beers

Live Music by Passafire and more