LECTURE: Rick Steves Returns Through the Back Door 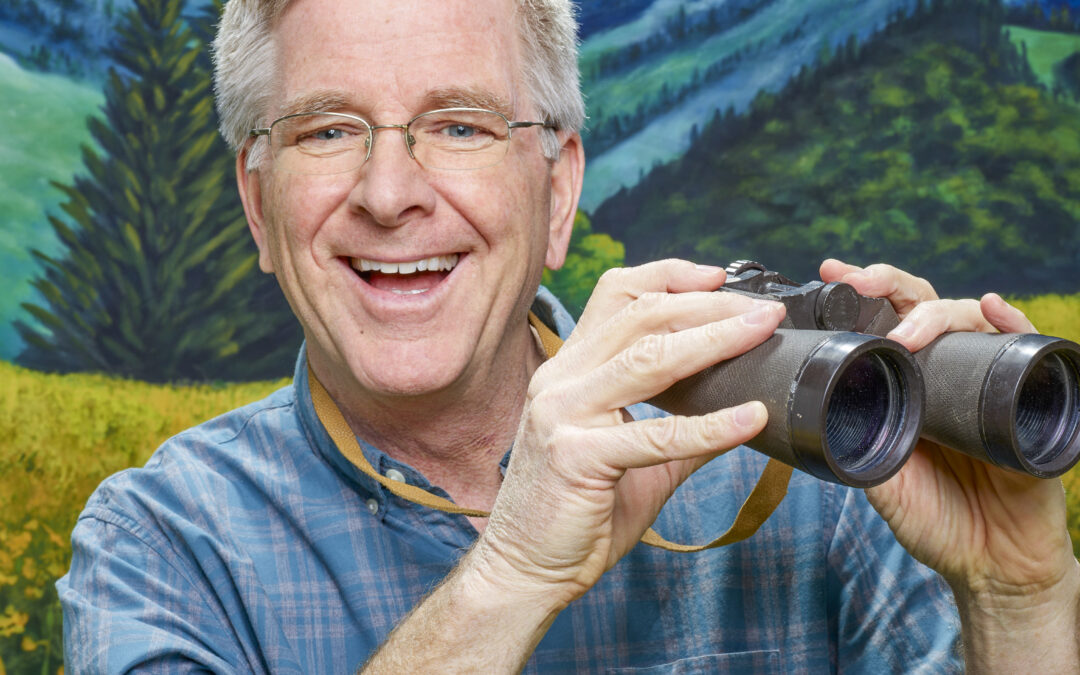 When Rick Steves returns from his European vacation — he’ll be in Burgundy and the Swiss Alps in August — one of the first work-related duties he’ll be doing is an hourlong lecture on September 7 at Chrysler Hall as the Norfolk Forum launches its 90th season.

Rick Steves, of course, is known to millions of Americans for his PBS travel series and his invaluable guide books for European travel adventures.

In late July, I caught up with Rick Steves for the following interview to learn more about his upcoming lecture and to get his take on today’s challenging world of travel.

VEER: The topic of your talk in Norfolk is European travel skills. I imagine this will be especially eye-opening given the current challenges with canceled flights and lost luggage, right?

Rick Steves: Yes, as a matter of fact I sent a reminder to those taking our tours this upcoming month the best way to minimize all that chaos at the airport is to not check a bag. I don’t check a bag anyway so it’s no big deal for me. I live out of a 9” X 22” X 14” carry-on whether its for two weeks or two months, north or south, winter or summer.

VEER: What advice do you give travelers who wish to shop in Paris or Rome, especially given the strength of the dollar against the euro. Are these items they should ship back or have the retail business ship?

Rick Steves: Yeah, if you buy something that makes sense to ship, generally a merchant is prepared to ship it for you more efficiently and economically than you can. They know how to ship it and how to deal with customs.

If you’re buying souvenirs you can box them and pop by a post office and mail them home.

VEER: What should American travelers be aware of now regarding COVID changes in Europe?

Rick Steves: I think we have to remember COVID is not over, but things are opening up and people aren’t having strict protocols about COVID.

It varies from country to country, but I think it’s really important for travelers to be conservative as far as having your shots and being fully boosted.

Europe is more inclined to eat outdoors than before. People don’t have to wear masks, but I think it’s considerate and wise to wear a mask when you’re on public transit or you’re in a taxi or going to a museum.

Other than that it feels like it always did before COVID. There’s a lot of energy in the streets, which I was concerned was going to be lost. One of the great intangibles of traveling in Europe for me is the energy in the street. It’s certainly back with a lot of gusto.

Europe is now more adept of having people book things in advance.  So don’t shirk that. A lot of people are disinclined to get reservations for sights or experiences and they want to keep their options open and just show up at the door, but it’s really in your interest when it comes to the major sights and places that suffer from crowds to go to their website, commit yourself to a time and get that ticket in advance. That will solve a lot of crowd problems.

I was just in Amsterdam and for years I’d just walk by the Anne Frank House to see how many hundreds of yards the line is to get in. Now there’s no line at all. It’s just 50 people show up every half-hour for their appointed time to see the museum.

I just updated a lot of my major guide books and what I found myself doing was a little summary at the beginning of each chapter reviewing, okay, if you’re going to Paris, Florence or Amsterdam, what do you need to do in advance? If you’re in Florence and you want to see the Uffizi Gallery or see Michelangelo’s “David” sculpture or the Duomo cathedral, those are the three things you need reservations for. You don’t need reservations for any other sights.

If you’re going to have a dinner that you care about make a reservation for that in advance, and also because people are just eating out like mad in Europe.  The good places are well known as good places and they are generally small and they do book up.

VEER: What are some of the other important aspects of current European travel you’ll be discussing with the audience in Norfolk?

Rick Steves: The themes that I talk about when I do one-hour talks like I’ll be giving when I’m in Norfolk are the importance of equipping yourself with good information and expecting yourself to travel smart; the importance of the value of your time. Our time is a limited resource just like our money. A lot of people are focused on saving money and they waste a lot of time. But your time, especially when you’re on vacation in Europe, is really valuable. So don’t stand in lines.

There’s two kinds of travelers: those who stand in lines and those who don’t. You can get around those lines if you’re a smart traveler.

Also, packing light is critical, as we talked about earlier, not just to get through the chaos at airports but also to be nimble.

We take 25,000 people on our tours each year and no one is allowed to check any bags.  No one wishes they packed heavier once they get over there, I can promise you that.

VEER: In you July blog you mention European cities invest in the good life. Do you find that to be the case in modern cities such as Berlin?

Rick Steves: Yeah, Jeff, and what I was talking about by investing in the good life, I wasn’t thinking of the charming little Medieval towns people love to go to like Bruges. Those are wonderful places.

What I’m talking about is governments investing in people-friendly cities with public transit, pedestrian zones, wonderful food markets, accessible high culture like opera and symphony, and concerts you can go to without going broke that have government subsidies, basically.

Governments in Europe serve as referees for capitalism. That’s the difference between Europe and the United States. We like to have a rough-and-tough capitalist environment where we can work hard and prosper or just get out of the way.  In Europe, they are equally enthusiastic about capitalism, but they really understand you need a referee. A referee lets capitalism function efficiently while taking care of tomorrow and taking care of the losers in capitalism, and that makes society more compassionate, equitable, and sustainable.

And you pick that up in your travels. These people pay taxes, they have restrictions and they are living together well. They are more densely populated than we are; they’ve been together longer than we have, and they know things we don’t know.

VEER: I’ve seen plans for making Paris a more green city. Is there a concern aesthetically with a city that is a beautiful as Paris could be altered with green buildings and more beaches along the River Seine?

Rick Steves:  Paris is a great example, Jeff. Of course, Paris has its beautiful architecture; it’s the most beautiful city in Europe I think you could certainly say. Those buildings are all carefully protected. You can’t build higher buildings within the circle road. Outside the periphery, the sky’s the limit. You have all the skyscrapers outside the city center. The buildings in the center are five stories tall and then you can see the domes and church spires above those.

Paris is going green in the sense of upsetting drivers. They took the arteries that went along the Seine river, which alleviated a lot of traffic congestion, and they turned them into beaches and bike paths. Well, that’s great if you’re a person who wants to listen to birds tweet, ride your bike and use the metro.  The focus is on public transit and green space.

I was just reading how the Notre Dame project will have a beautiful new landscaped exterior focus that will incorporate the river and the parks. It’s going to be just beautiful.

The Parisians are generally behind this kind of investment into their city.

VEER: Your last lecture here in Norfolk was a fundraiser for our local public media outlet. You also were touring in support of the book, Travel As a Political Act.  Given the state of the world and our chaotic political climate within the United States is it more important than ever to travel as a political act to show others the good side of ordinary Americans?

Rick Steves:  I think if every American traveled before they voted our country would be a lot stronger and happier.

When you travel you leave your home and look at it from a distance and see things you don’t see when you’re right in the middle of it. You’re able to get to know the other 96% of humanity.

Of course, there are tragedies going on, but there’s a lot of good stuff that doesn’t make the news.

Another great thing about travel is you realize different societies are dealing with the same issues, and why not compare notes?

Europe is a cool opportunity because it’s kind of like a sister society. They’re very committed to their pluralistic democratic governments. They’re very capitalistic; they’re very affluent; they have a Christian heritage. They’re just so much like us. And they have a lot of the same problems. They attack the problems differently than we do. They don’t get it all right, but we could learn from them and they can learn from us.

That’s the beautiful thing about travel — it makes us less fearful. To become less fearful, I think, is a political act. When you are fearful you’re easier to manipulate. Powerful people capitalize on our fear. They shape our perspectives and get our votes.

I just love the value of travel.