ART: If Not Now is Environmentally Focused 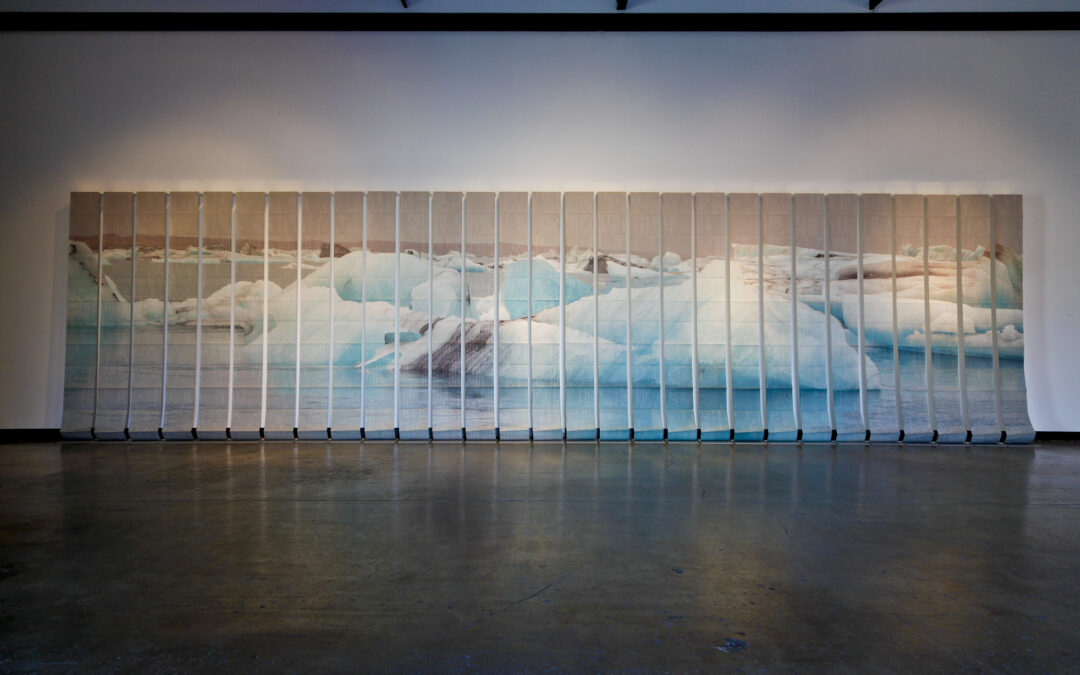 The most recent exhibition in an ongoing series of environmentally-themed shows curated by Gayle Paul at the Portsmouth Art & Cultural Center, If Not Now, brings together the work of eight artists from upstate New York to Washington state with a strong representation by Hampton Roads-based artists.

Though some of the work falls under the rubric of art activism, this is not an overtly political or polemical show, as viewers can read as much or as little between the lines—or the horsehair—as they choose.  It is, rather, a strikingly beautiful one, both powerful and elegant.  However, a preponderance of text panels in one installation somewhat disrupts the visual flow and introduces an otherwise absent didacticism, perhaps more appropriate to another space within the museum.

Even an artist like Kim Abeles (California), a pioneer environmental activism, avoids in-your-face protest.  Instead, Abeles uses smog as a printmaking medium giving traditional porcelain portrait plates a dirty little twist.  Here, she incorporates portrait decals and smog into her process, creating a series of 10 wall-mounted plates featuring the likenesses of world leaders and passages about environmental issues attributed to them.

Pietrantoni’s monumental panoramic series of some 30 accordion books, mounted vertically, reads like Asian hanging scrolls with their emphasis on the majesty of the natural world, only here the subject is melting glaciers overlaid with the ephemeral text of a poem by Devon Wootten; Pam Ponce’s poignant photographs, accompanied by text panels, record the devastation and renewal brought on by drought and forest fires in the Great Dismal Swamp; John Sabraw’s rondels depict topographical maps and aerial views of landscapes rendered with eco-friendly paints made from toxic waste extracted from polluted streams, the result of run-off from mining sites; and Millicent Young’s large-scale, organic, and subtly kinetic sculptures crafted from horsehair, wood, and ceramic are referential of rain and other natural phenomena.

A couple of days before the August 5 opening reception, I caught up with Benvenuto to probe a bit into her series of work inspired by an odd occurrence in a retention pond—designed to contain and filter rainwater runoff from the road—near the corner of Cedar Road and High Street in Portsmouth.  Passing the pond either after work—she is now retired from her longtime position as a high school art and art history teacher—or working out, Benvenuto recalls that in 2018 someone had evidently thrown some lotus seeds into the body of water.  Throughout the ensuing months, she tracked the growth of the plants as they took root and flourished.  Benvenuto “had a year with the pond” before city workers sprayed the lotuses with herbicide, as the plants were clogging the pump.

One day, captivated by the colors—an earthier and lower key palette than she typically uses—and the way the golden light of October fell across the pond and the pods, she pulled her car into a nearby parking lot and began taking photographs.  Her photos became her visual references for this series.

A figurative artist, Benvenuto relished this direction as an opportunity to leave the human form behind and focus on design.  As a result of immersing herself in art history during her teaching career, she reflects that she has become increasingly influenced by Renaissance masters such as Raphael and the way they approached the picture plane.  Yes, she points out, everyone who cares about such things knows about the Rule of Thirds and the Golden Mean, “but there is so much more.”  She has become intensely responsive to entry and exit points, tension around the edges, and arcs that create movement “rolling” through the spaces.

The completed compositions, with titles like Bitter Nocturne and Fantasia, are concurrently organic and geometric, contemporary and traditional, figurative and flat.  Her use of Utrecht heavy-bodied acrylics achieves surfaces that read like luscious oil paint with the pods themselves functioning as both expressive visual forms and metaphors for the human beings to which Benvenuto typically gravitates.   Fragile, resilient, temporal, and everlasting, these containers can be interpreted as penetrable repositories for all that accrues as life washes over us, rising and receding.