STAGE: Hurrah Players’ Descendants  A Family Show in Many Ways 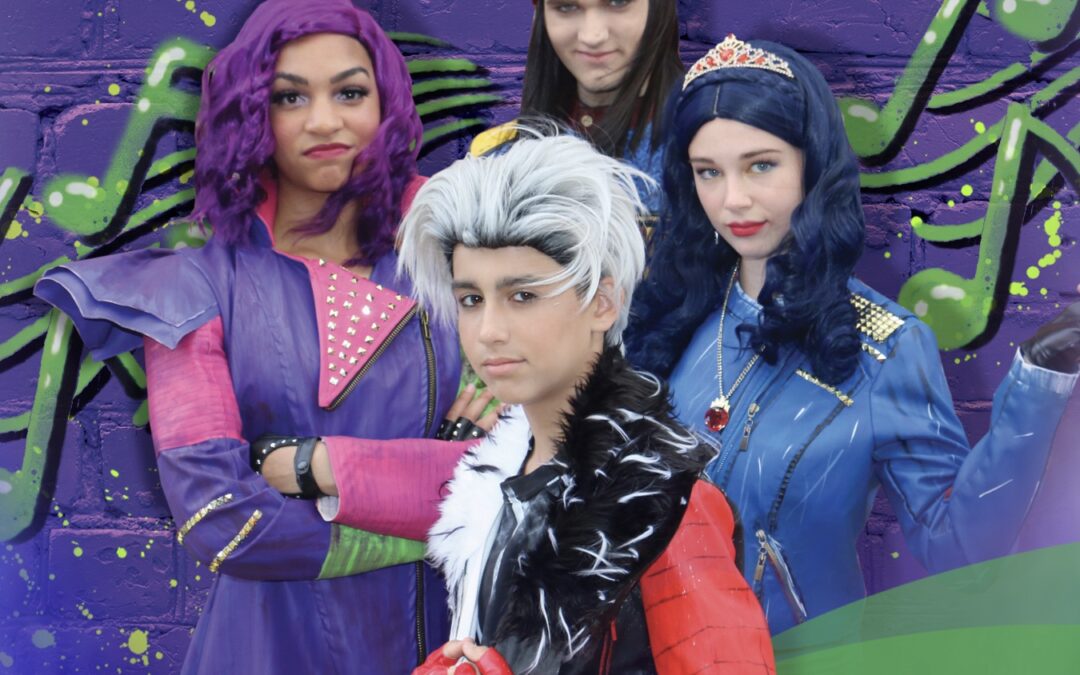 It’s families to the fore when Hurrah Players’ multi-generational cast of Disney’s Descendants: The Musical hits the Wells Theatre stage July 22-24. It’s not just the characters, but some cast members as well, who live up to the title’s parent and offspring connection. There are three mother-daughter pairs in the cast.

Descendants spins off the most popular series of movies in Disney history, a set of four (so far) Disney Channel Original Movies that put the teen-aged kids of notorious Disney villains in the company of their counterparts from the heroic side of Disney stories. It covers the events in the first two flicks, Descendants from 2015 and Descendants 2, from 2017.

Maleficent, the witch who put the Sleeping in Sleeping Beauty’s name, has a daughter named Mal (played by McKinley Heidelberg-Denison), whose first lines in the play are “They say I’m trouble, they say I’m bad, they say I’m evil, that makes me glad.”

The daughter of Evil Queen (Wicked Queen, Queen Grimhilde) from Disney’s first full length animated film Snow White and the Seven Dwarfs, goes by the moniker of Evie. Her philosophy is, “Just be pretty, do not be smart. It doesn’t matter what’s on the inside, men don’t want a woman who thinks,” said Descendants director and Hurrah Players founder and Artistic Director Hugh Copeland.

Magically imprisoned on The Isle of the Lost where they cannot make use of their magic, the villainous parents and their malevolent progeny see a chance to escape when an invitation to the Disney characters’ prep school comes from 16 year old Ben, son of the married Beast and Belle and the heir to his father’s island kingdom of Auradon.

The headmistress of Auradon Prep is Fairy Godmother, who is, Copeland said “all sunshine and butterflies.” Her magic wand would have the power to free the various villains from their incarceration, so Maleficent tells her daughter to steal it ”so she can wreak all kinds of havoc,” in Copeland’s words.

The four teens from Isle of the Lost find that their classmates are Godmother’s daughter Jane, along with Chad, whose parents are Cinderella and Prince Charming, Sleeping Beauty’s daughter Audrey, and Doug, whose dad is dwarf Dopey. Snow White herself, now an Auradon journalist, is in the mix also.

Through 40-some hit songs, plenty of lively dances and crowd and chorus scenes, by means of young romance and parent-child conflicts, Ben’s experiment in treating apparently inherent evil with determined and natural goodness plays out until the show reaches its conclusion, which is, in the words of that young king-to-be, “We are all capable of good and bad, no matter where we come from.”

In the real world, coming from Hurrah Players has been a step toward stardom. The star of TV’s The Flash series, Grant Gustin, is an Hurrah alumnus. Another alum, Emmy Raver-Lampman, has a thriving stage and TV career that has included an ensemble part in the original Broadway Hamilton and the featured role of Angelica in the show’s first national tour. Adrienne Warren, who was America’s first Black Annie, in the Hurrah Players production of the show of that title, went on to play another title role in Broadway’s Tina. That performance garnered Warren her second Tony Award; the first was for her role in Shuffle Along.

So Hurrah’s Descendants: The Musical is not only show for, and about, and even in part by families, but also a chance to see performers who could be stars of stage and screen in just a few years.

The Hurrah Players in partnership with Virginia Stage Company

Orchestrations by and music produced by Matthew Smith