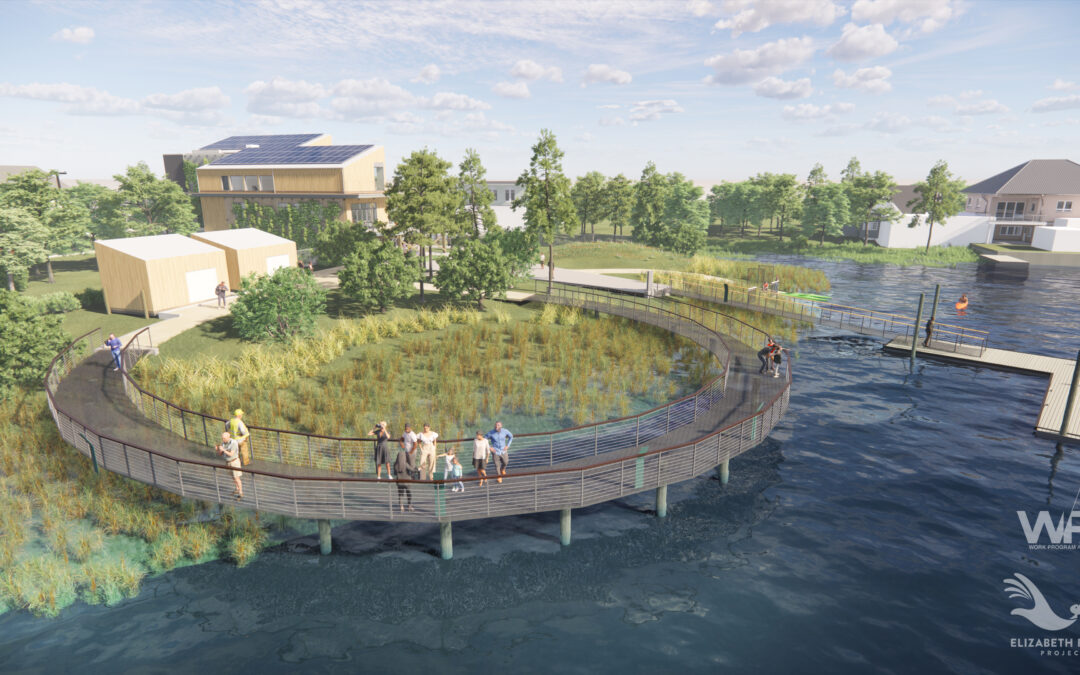 (A rendering of its Knitting Mill Creek boardwalk.)

The environmental nonprofit, which recently outgrew its Portsmouth headquarters, bought the parcel of land at 4610 Colley Ave. in Norfolk and will move there in 2023. (For reference: The spot is five blocks south of Elation Brewing Company.)

The original plan was to restore the native wetlands and redevelop the cinder block building previously occupied by the American Legion.

Then the brainstorming began.

Sam Bowling, an architect and project manager at Work Program Architects in Norfolk, watched first-hand as ERP and its board of directors collaborated with the city government, academia, nearby civic leagues and other stakeholders.

“Those initial meetings transitioned from: ‘Hey, let’s renovate and repaint this whole building,’” Bowling said, “to: ‘We’re going to be building a flagship of sustainability and resilience on this really iconic site.’”

The plan now includes a three-story, 6,500 square foot “resilience laboratory” that will also serve as ERP’s new headquarters and an educational space.

“We wanted to deliberately ‘hold’ that corner,” Bowling said, “and make an urban gesture and acknowledge that we see Colley Avenue as this up-and-coming, rich vein of culture—specifically, culture that is coalescing around this kind of eco-mindedness. … So this is maybe the capstone or the anchor to that whole corridor.”

The living shoreline will feature a research dock and a circular, see-through boardwalk over Knitting Mill Creek.

“You’ll be able to look through it, and it’ll let light through,” Bowling said. “It serves the purpose of helping to make sure the full line of plants—the ecosystems down there—aren’t as heavily impacted, but also you can physically look down past your feet and see directly into this zone.”

Bowling said working with ERP has been “wildly inspiring.”

“It was a dream project that I haven’t really had the experience of doing before,” he said. “It was a lot of new systems to learn about and a lot of best practices that, as architects, you’ve always known about … and finally getting a client say we want to do all of it.”

The construction project coincides with ERP’s first rebrand since it was founded 30 years ago.

Davis Ad Agency in Virginia Beach led the effort, developing a marketing campaign around a simple call to action: “Do Something Beautiful.”

Davis also reimagined ERP’s brown pelican logo. (The once endangered water bird is synonymous with the health of the Elizabeth River—so much so that ERP released three rehabilitated pelicans at its Colley Avenue ground-breaking in May.)

The new logo is a monochrome silhouette of a pelican whose wings look like an outstretched hand.

Todd Aftel, the creative director at Davis who designed the logo, said he was inspired by ripples of water while on a photo shoot on the Elizabeth River.

“It was just one of those a ha moments, really,” he said. “It was just like, ‘Let’s see if this works.’ And it came together. … It was pretty much to show the relationship between nature and people—hands on the river, being able to be involved. Together, they create something beautiful.”

Aftel said he’s proud to have created the logo and to see it starting to pop up all over Hampton Roads, but he’s more excited about the results of the overall campaign.

“We have 700 new members we’re trying to get,” he said. “I think that’s really the rewarding aspect of it—knowing that it’s making a difference, it’s connecting with people, and we’re doing our job right.”

Marjorie Mayfield Jackson, ERP’s founder and executive director, is in a similar state of mind: proud of the work the organization has done—and continues to do—but concerned that it’s “a bit too much under the radar.”

“We just need to get to a new level of visibility and participation,” she said.

“We just completed the silent phase of our biggest capital campaign ever,” she added. “With it, we ought to take full advantage of all these big investments and new infrastructure. The possibility for a much larger presence and engagement … it’s just all part of a whole new phase—a new day.”

It may be a challenge, but Jackson is used to it.

“When we first got started,” she said, “people said the river was dead. It was kind of a joke to talk about cleaning it up. There was great skepticism. Today, we don’t hear that. I think we just need a better vehicle for people to get on board. They’re ready to get on board. They see the dolphins and the otters and the sea horses. It’s a great feeling to know that your home river is coming back to life.”

The Elizabeth River Project is offering annual memberships for $35 until the end of August, which it is promoting as “Do Something Beautiful Month.”

In addition to helping fund ERP’s restoration efforts, new members will get a “Do Something Beautiful” T-shirt and window decal, discount pricing on ERP programs and events, newsletters and project updates, and other benefits.

There are numerous other ways to get engaged with ERP, including the River Star Home program, which currently has more than 6,500 participants.