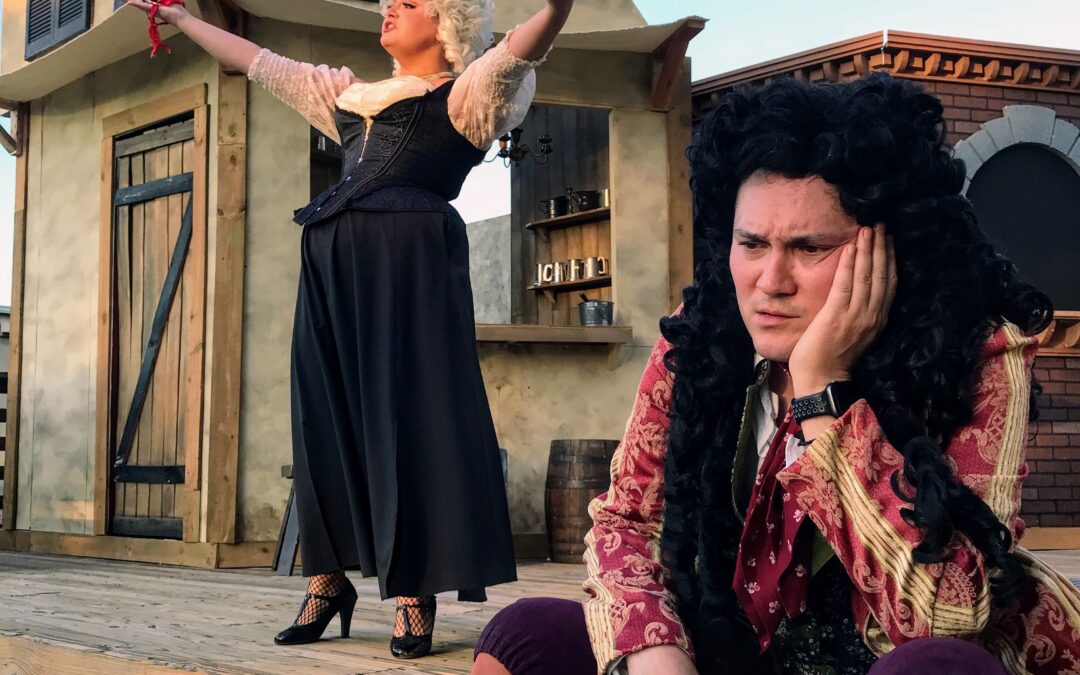 Shakespeare in the Grove, Hampton Roads’ free of charge, annual summer, Tidewater Community College mounted outdoor showcase of one Bard written work per year, celebrates its 25th Season with an imaginative new staging of our region’s very own Shakespeare romance, The Tempest, June 22 through 26 on the school’s Chesapeake campus.

It’s ours because the outline of the plot – with Midsummer NIght’s Dream one of the two that Shakespeare did not base on a pre-existing tale – was quite possibly, even probably, sparked by the shipwreck of a vessel bound for Jamestown in 1609.

In Shakespeare’s script a ship bearing one King Alonso, his son Ferdinand and their retinue, including Antonio, Duke of Milan, find themselves stranded on an uncharted mid-Mediterranean island. By no coincidence at all, Antonio’s brother Prospero, from whom Antonio usurped the dukedom, lives there with Miranda, his teenage daughter.

(Here Antonio has become Antonia, played by Catherine Gendell, one of 4 cast members in this production who were in the first Grove production, the sylvan romantic comedy As You Like It, a quarter century ago. Tempest director Trey Clarkson was on stage back then, along with Brant Powell who is now playing the lead role of Prospero, and with Brian Breshears, who plays the King this summer.)

In historical fact, the real ship “Sea Adventure,” a.k.a. “Sea Venture,” separated by a hurricane from other ships bound for Virginia, pitched up on uninhabited Bermuda. The passengers built two smaller vessels from lumber salvaged from the wrecked ship, and made their way to Jamestown. Shakespeare would have had access to one or more of the several narratives of the wreck and succeeding adventures that were published in England shortly afterwards. The most well known account was by William Strachey, who, as owner of one sixth of London’s Blackfriars theater in 1606, could even have met the playwright. (Strachey’s signet ring was unearthed from a Jamestown trash pit in 1996; it’s tempting to think that this ring could conceivably have touched Shakespeare’s hand years before its wearer had his unimaginably consequential New World adventures.)

Shakespeare’s Prospero is a powerful magician; his self described “so potent art” is powerful enough to let him command the weather. It was he who called up the storm that brought Antonio and the others onto the small, four inhabitant realm he has ruled since he and and infant Miranda were set adrift at the mercy of the sea upon his overthrow.

The other two residents of his unnamed island domain, resident there before Propero  arrived and took over, are Ariel, a magical spirit who has become Prospero’s servant, and Caliban, the offspring of a witch and a devil, perhaps something like a semi-human, who unwillingly serves Prospero.

Stage director Trey Clarkson describes Caliban as “a magical creature in a lost world,” and says that the genderless Ariel, played in this version not by one actor but by an even dozen performers of varying ages, will be approached with that “same sense of magical wonder.”

Clarkson, an Adjunct Professor of theatre and fine arts at TCC, ODU and Regent University,  who has also had a career teaching at Catholic High and Great Bridge High School and a host of onstage roles and production positions all over the area, including Virginia Stage, and Norfolk State and the Arts Festival, joined Professor Mathew Gorris, Chair of the TCC Theatre faculty and Artistic Director of Shakespeare in the Grove, in a conference call interview. Clarkson made the points that Tempest is both family friendly, as Grove has always been, and also “very accessible,” because “the language does not get too over the top and the plots lines do not get too complex.”

The play is especially known for one of Shakespeare’s most lyrical soliloquies, a speech that even in the context of Shakespeare’s other works stands out for its stunningly beauty. As the story nears its end, Prospero bids farewell to his “art,” his practice of magic. Clarkson and Gorris both make the point that Tempest was probably the last play that Shakespeare wrote on his own (though he apparently contributed to other plays as a co-worker with other playwrights after Tempest). Prospero’s farewell to supernatural magic is often seen as Shakespeare’s farewell to his own art of verbal magic.

“The story remains timeless,” Clarkson says. “It’s a redemption tale [but] is Prospero going to get revenge or redemption?…He’s so full of power that he does not know which way to go…He actually learns something by watching his daughter fall in love.” (No great spoiler there, given the obvious outcome of naive Miranda meeting young, royal and single Ferdinand, the first human other than her father she’s encountered since her dimly remembered infancy.)

The Tempest also has some of Shakespeares most accessible comic bits, Clarkson points out. It’s shot through with slapstick and broad visual humor and gags that do not depend on out-of-date word meanings, stuff that is as funny to a modern audience as it was to people some 410 years ago.

The comedy rests in the hands of a couple of scene stealing roles: King’s perpetually tipsy butler Stephano and his partner in partying, the jester Trinculo. Clarkson has added a character named Touchstone who takes some of the lines originally assigned to those two. They introduce Caliban to the confusing euphoria of alcohol, and then bumble along with half-baked ideas of helping Caliban overthrow Prospero. Of course, their intoxicated plotting is no match for a man who can call up the very elements of nature to do his bidding.

Gorris touts The Tempest as a sort of gateway Shakespeare. “It’s one of his plays that people  really enjoy. If you’re not familiar with Shakespeare it really lays the groundwork” for an interest in the other plays. “If it’s your first time going [to a play by Shakespeare] … it has a little bit of everything for everyone.”

“It’s one of those classic plays that can be reimagined so many times…people will find new ways to connect with it…Even though you may have seen it two or three times before, you will reconnect with it just like the first time, and it’s such a great family show.”

Clarkson has put Tempest in the era of the Spanish conquistadors, the 15th century, with a King Alonso who speaks only Spanish. The King is accompanied by an interpreter who translates his Spanish.

Interpretation plays a special part in the final performance of this Grove production. “On the Sunday, June 26 performance,” Gorris makes a point of mentioning, “It’s American Sign Language night, so we are inviting the deaf community to come out and … we will have interpreters on the side of the stage so the deaf community can experience Shakespeare. This is something new for us, working with our ASL Department at TCC.”

Like he said, the show “has a little bit of everything for everyone.”

Clarson agrees. Speaking of every performance, he says,“It should be a really fun night for everyone.”

The Grove stage is located behind the Pass building.