That Latin Jazz Groove Lives On 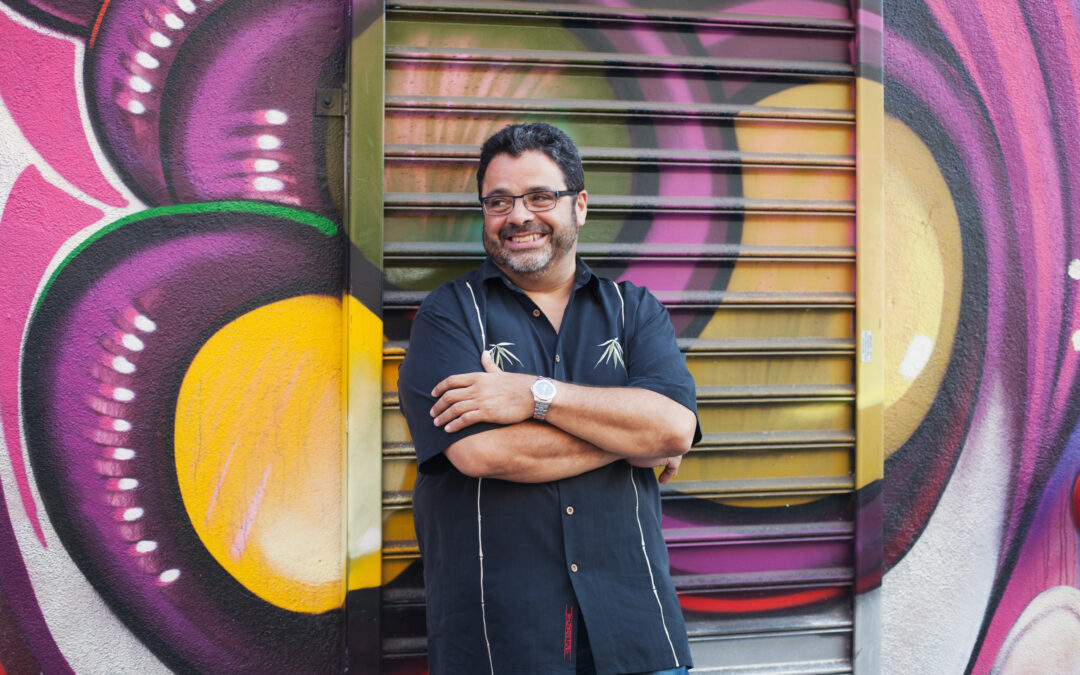 “Besides being influenced by his artistry, the thing I inherited from my father, and what I think my sons have inherited from me, is dissatisfaction,” says Arturo O’Farrill, acclaimed leader of the Afro Latin Jazz Orchestra, about his father, the legendary Chico O’Farrill, and how his father’s dissatisfaction with the status quo—in both art and life, was passed down to him, and now down to his own two sons, who are themselves great musicians. Arturo is chatting with me by phone while home in Los Angeles, where he serves as Professor of Global Jazz Studies at UCLA, a position he’s held for the past 3 years. His late father, an icon of the Afro-Cuban jazz movement, never believed in “phoning it in” Arturo says. As a serious, committed artist, you’ve got to progress and take risks.

Progressing and taking artistic risks has been a mainstay in the career of Arturo, a jazz pianist and composer, who founded the Afro Latin Jazz Alliance in 2007, a non-profit which focuses on the preservation of Afro Latin jazz music, through performance and education, and is still considered a vital resource for the survival of the artform. The alliance, which is NYC based, has provided Arturo with a major platform to build community around the art and culture of Afro Latin jazz, attracting fans and supporters from around the world to its annual programming throughout the five boroughs.

Led by Arturo, the Afro Latin Jazz Orchestra will perform later this month at the gorgeous Sandler Center for the Performing Arts, as part of the Virginia Arts Festival’s celebrated 25th season. The ALJO, with its eighteen musicians, featuring both men and women, and consisting of multiple trumpeters, trombonists, saxophonists and rhythm section players—performs big band Latin jazz, and other styles within the jazz idiom. For their performance in Virginia Beach, the orchestra will celebrate the centennial of Chico O’Farrill, and his many contributions to Latin jazz music. “We are playing one of his masterpieces, and we’re playing one of the pieces that I wrote to celebrate his vision and progression,” says Arturo. “So that’s a very important part of our program this year.”

Chico O’Farrill was born in Cuba in 1921. After moving to New York City in the late 1940s, he became immersed as a musician in its vibrant jazz scene, and quickly started working with the likes of Count Basie, Art Farmer and Machito. Chico’s “Afro-Cuban Jazz Suite” is considered a masterpiece, and was vital to the further development and growth of Latin jazz, and specifically Afro-Cuban jazz, in the 1950s and beyond. Through Chico’s own highly successful Afro-Cuban Jazz Orchestra, and its popular weekly gigs at Birdland, he influenced the work of many of his peers, as well as the work of jazz artists who embraced Latin jazz in generations that followed.

That includes his only son, but Arturo hasn’t just followed in his father Chico’s musical footsteps, he has actually expanded the accepted scope of Afro Latin jazz, through his many successes composing ballets, performing and composing music with the biggest names in jazz music, touring internationally with the ALJO, and eventually winning six Grammys. He is both a formal and informal ambassador of Latin jazz music and culture, and his commitment to its continued growth has helped to keep it relevant since its heyday. “We’re still playing this music, 60 to 70 years later,” he says, late in our conversation.

Playing this music, for Arturo, is primarily about fostering community through performance and the artform in general. He is not an “art for art’s sake” kind of artist and thinker. He tells me throughout our conversation, how he’s passionate about all that’s happening, and has been happening in America, and around the globe. Art should speak to that, and jazz is no exception, and is actually very equipped to positively impact community building. “It’s not until you connect it in service to others, do they take the richness of the meaning,” he says. “The Afro Latin Jazz Orchestra, the Afro Latin Jazz Alliance, and all the different educating artists, teachers…and everything that we do, is all about helping others.”

Besides being influenced by his father, Arturo developed as a young musician by listening to Miles Davis records like Seven Steps to Heaven. “When I heard Herbie Hancock’s solo, I literally realized the reason I was created was to play music,” he says. He later worked with Dizzy Gillespie, as a young-un, connected through his father’s work with the jazz icon. “Playing with Dizzy Gillespie, and hanging with him, was kind of the same thing,” says Arturo. “His music was his life.”

Another early influence on Arturo, who grew up in NYC with his parents and sister, was the great jazz pianist Carla Bley, who gave a young Arturo the opportunity to perform with her band at Carnegie Hall. He even played with her band for several years afterwards. “What I learned from Carla…she had an unbelievable curiosity and integrity. And she wrote whatever her heart dictated and whatever her art dictated,” he says. “Karla also showed me, in her music, that jazz didn’t have to be really serious and full of itself. It could actually have a lightness and humor about it that kind of reflects the fact that life itself is funny and crazy and weird.”