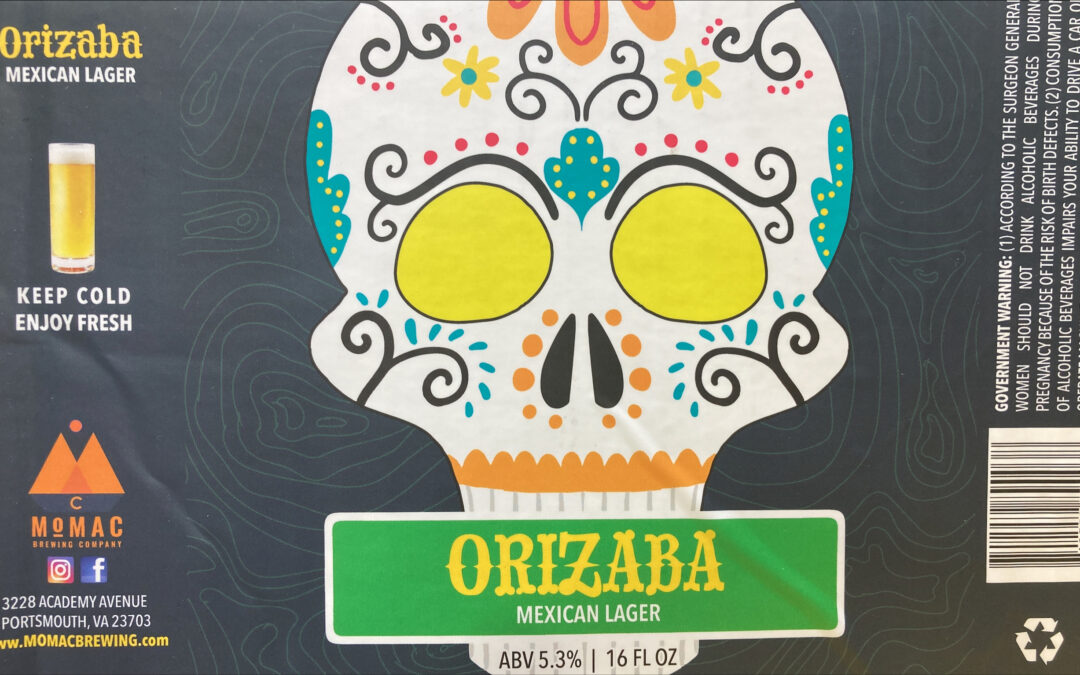 Mexican lagers have been a favorite amongst local beer lovers, especially on Hampton Roads’ notoriously humid, hot days of spring and summer.

Here are a few to try.

Head brewer Chris Richards made MoMac’s Orizaba Mexican-style lager with flaked maize and a lager yeast strain specific to Mexico. The name Orizaba is the name of the City of Portsmouth’s sister city in Mexico. The beer spends 100% of fermentation inside of a tequila barrel with a hint of lime zest. “One of my favorite barrel aged beers we make,” said Richards. The non-barrel aged version of this Mexican lager will also be available in 16 o.z. cans.

Said brewmaster Todd Emr: “We brewed a Mexican-style lager with corn in the malt bill and added just enough lime puree to give this lager a refreshing, slightly tart kick.” 4.7% ABV. Draft only.

The Vanguard will be celebrating Cinco de Mayo with drink and food specials and most importantly featuring the band The Latin Jazz Conspiracy.  They are an eight member band performing Latin Jazz hits like “Manteca” by Dizzy Gillespie, “Song for My Father” by Horace Silver and “Caravan” by Duke Ellington.  They cover several Latin styles like Salsa, Mambo, Bolero, Bossa Nova, Samba and Cha-cha.

Rosa’s Cantina is a 4.9% ABV Mexican -style lager brewed with a high percentage of flaked maze for a light, crisp, refreshing finish with just a touch of sweet cereal character.

This 5.4% ABV brew is a non-European Mexican-influenced light lager which features pilsner malt, rice adjuncts for added crispness, and New World Sorachi Ace hops to complete the profile. It is crisp enough to drink on a beach with a touch of salt or a lime on the rim of your glass.  The brewery will feature the new draft-only release of this beer at our Cinco de Mayo celebration in the tasting room on Thursday, May 5.  A food truck will feature tacos, quesadillas and chips/salsa.

This beer is a variation of our staple Weekend Lager brewed with jalapeños and lime. “We like to get it out  in advance of Cinco de Mayo so people have the opportunity to take some home to celebrate later,” said Alewerks’ Michael Claar. Sabado Domingo has an aroma of fresh cut limes  with a subtle hint of pepper in the background. A quick pop of spice drops on the first taste but washes away as its slowly replaced with jalapeño heat.

“No, we didn’t put churros in the mash, but we did the next best thing: We made a liquid version of our favorite treat from South of the Border,” said Penny O’Connor. “This beer is very big and very sweet. Unlike a traditional brew, this liquid has little to no hop aroma or bitterness, allowing it to boast a bready sweet pastry aroma that melds together with Lactose, Vanilla, Coconut (cholaca), Cinnamon (ceylon), and Brown Sugar. One sip of this 9% ABV beer will take you right to the churro cart – and that’s one delicious place to be. Available on draft and in cans. Salud.”

It’s a Surv Veza Remix! This delightfully complex beer took a nice long siesta in the finest Tequila barrels the brewery could source. This beer has all the things you love about Surf Veza: limey sea salty goodness, with layers of agave, and tannic and smokey barrel notes. Said Penny O’Connor: “This beer will have you pulling up your cowboy boots and hitting the dance-floor.” 5.3% ABV. Cans and draft.

Released in time for Cinco de Mayo. 5.4% ABV and available in cans and draft.

Friar Storm is a Foeder-Aged Mexican lager made with Tuxpeno Corn, 5%, Draft and cans, Released on Cinco de Mayo.

A toasted Grasshopper Gose made with Chipotle peppers and lime zest. 4.6% ABV. Draft and crowlers. Releases 4/14, but will still be available for their Cinco De Mayo release event.

Mexican-style amber lager with lime. Available in draft and 16oz four-pack cans. “We took our Frogman Lager recipe and added malted corn to the mash and finished off with a big dose of lime during fermentation. Carmel and bready notes with some corn sweetness followed by bright lime flavors,” said head brewery John O’Reilly. Crisp and refreshing. 5.3% ABV.

Head brewer Matt Topping shared this description of their Mexican-inspired lager: “Picture a beach. Now picture the beer you’re drinking on the beach. Now open the tap. Seaveza is our take on a classic Mexican-style lager. Light, refreshing, and the perfect beach companion.” 4.6% ABV to be released April 22 in cans and on draft.