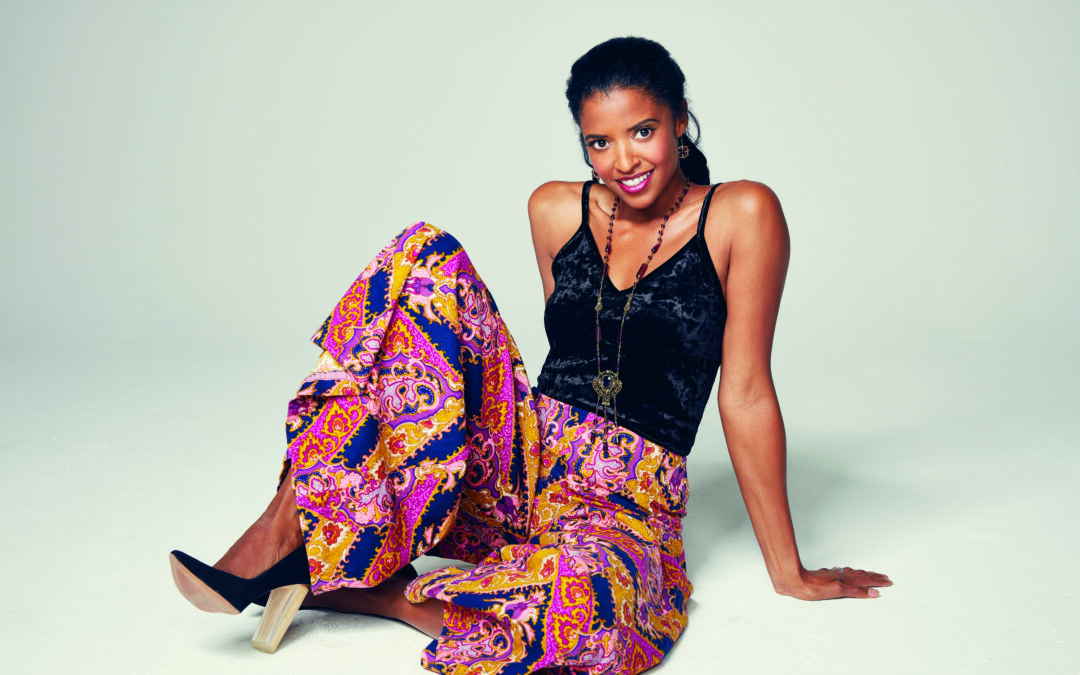 She’s won awards, or been nominated for them, for Shakespeare and soap opera and songwriting and Off-Broadway, she’s been a Latina junkie stripper in the late 20th Century and the rapping socialite sister-in-law (and maybe secret love) of Alexander Hamilton in the late 18th.

She’s been a poor Black, sexually abused, Georgia farm girl teen and an African lioness queen. She’s the junior-high class clown turned Broadway star who’s set her sights on writing and producing, she’s touring the country with a concert that she likens to a party, and she’s landing on the Chrysler Hall Stage, via the Virginia Arts Festival, May 6, for one of those party/concerts.

She’s Renée Elise Goldsberry, and if her real name is not familiar, you may remember the characters she’s played: on TV, as Evangeline Williamson in the daytime drama One Life to Live (Two Daytime Emmy and two NAACP Image Award nominations, Soap Opera Digest Award winner) or as a back up vocalist for Vonda Shepard on Ally McBeal, or in the recurring part of Geneva Pine in The Good Wife.

Or the title character of HBO’s The Immortal Life of Henrietta Lacks, or as a guest on Star Trek: Enterprise and Royal Pains, on Law & Order: Special Victims Unit and onYounger, on Masters of Sex and That ’80s Show and in a bunch of others.

Girls5eva, the Peacock TV streaming series in which she stars, starts its second season the day before her concert here. Its first season got nominated for a Television Critics Award for Outstanding Achievement in Comedy, and Goldsberry earned a TCA nomination for Individual Achievement in Comedy; the Hollywood Critics Association nominated the show for Best Streaming Series, Comedy, nominating Goldsberry and co-star Paula Pell for Best Actress and Best Supporting Actress in a Streaming Series, Comedy.

She’s been on the big screen too, in a good dozen movies, including All About You, for which she had the leading role of Nicolle Taylor and also co-wrote and performed over 50% of the songs, title song included. (Her rock and roll writing got her a Grand Prize in the first John Lennon Songwriting Contest, in 1997).

Her discography numbers seven, with one on the way. Her Masters degree from USC is in jazz vocals; she can also do show tunes and rap, Christmas songs and even, quite movingly, ’50s style Doo-wop love tunes.

She’s best known for live performances: Nala in The Lion King, Michelle in Dreamgirls, Nettie in The Color Purple, Silvia in the rock musical version of Two Gentlemen of Verona (Drama League Award nominee), The Princess of France in Love’s Labors Lost, romantic lead Rosalind’s sidekick sister Celia in As You Like It, leading man Mike’s wife Kate in Good People (Outer Critics Circle Award nomination), the feline, acrobatic, drug fueled Mimi in Rent, and most famously and visibly, Angelica Schuyer in Hamilton (Drama Desk, Lucille Lortel, Broadway.com Audience, Emmy and Grammy Awards winner, plus she’s up for a Primetime Emmy for 2021.).

The New Yorker magazine called her “dynamite” and “incandescent” in Hamilton.

She chatted by phone while on the way to La Guardia Airport, headed to Cincinnati for a concert on the tour that puts her “most weekends some place, some times two places.”

It all began when a Houston middle school teacher, a lady whose name she does not immediately remember, figured out that young Renée’s skill at mocking mimicry of adults, coupled with singing ability, warranted positive attention and vocal solos.

“I love to talk about that because I don’t think our teachers get enough credit and people don’t spend enough time being grateful for the people who believed in them when no one else did…that was a very good teacher who gave me an identity that I still have.”

On the progress of her career she said: “The most constant thing in your career, especially if you have been around long enough, is disappointment and times when you have been disregarded and things fall short of what you had hoped for, and its important to remember that life is trial and error and you get what you are supposed to have and if you keep working at it some tremendously surprising dreams can come true.”

In a 2011 interview with TheaterMania, she said “the most important thing you have to do is to show up and believe you can.”

About the role of Mimi in Rent, and its astounding athleticism, and more generally about goals: “Sometimes I think we surprise ourselves with the things that we can do if we take some risks and the physicality of that role was really a risk and it worked out fantastically.”

About her upcoming concert: “It’s a celebration of love. It’s a great time! I think that people think that concerting is somehow formal and that it’s going to be a sit down and observe and appreciate … and it really is more of a party, we have a really good time …it’s important to me that when people leave that they feel that they are inspired… like we hung out together for an hour and a half in the kitchen or the family room, laughing and talking and sharing music that we both love.”

About her career so far: “I’m so very grateful for the people who have believed in me and that [called me up] to play surprising characters, and I’ve really enjoyed what i’ve done so far.”

About family; she’s been married for 20 years to attorney Alexis Johnson. In 2011 she said this to TheaterMania: “That’s the beauty of my life. At night I get to star in a Broadway show and during the day I get to be home and potty train my little two-year-old. I’m so blessed. It’s the happiest time of my life.” Since then they have adopted a girl from Africa, named Brielle, who is 9 years old to her brother Benjamin Johnson’s 13.

About her future: “I have a voice and I have an opportunity to produce and write roles for myself and for people like me … and I feel pretty excited about that.”

Without going into details about prospective work she says, “I have at least four different groups of people that I am working with to develop some projects that I am very excited about. I feel empowered and inspired by other actors who have been able to cross over to the other side of the table. I’m very grateful that the path has been laid in front of me by other people … [I’m] following in their footsteps.”

She made a point of mentioning “The album that I am writing and producing, that I’m putting out in the next few months and…Girls5eva.”

That show is summarized in official publicity like this: “When a one-hit-wonder girl group from the 1990s gets sampled by a young rapper, its members reunite to give their pop star dreams one more shot – this time while balancing spouses, kids, jobs, debt, aging parents and shoulder pain.”

Goldsberry rattled off the names of her co-stars: Sara Bareilles and Busy Philipps and Paula Pell, and said “It feels really good to be in the company of these women…not worried about inhibition and just going for it all. We’re talking about people who are starting to climb this mountain at this age. Everybody deserves to dream.”

“Everybody deserves to dream…we surprise ourselves with the things that we can do…show up and believe you can… if we take some risks…surprising dreams can come true.”