From Ballads to Rockers, Chicago Brings a Buffet of Styles 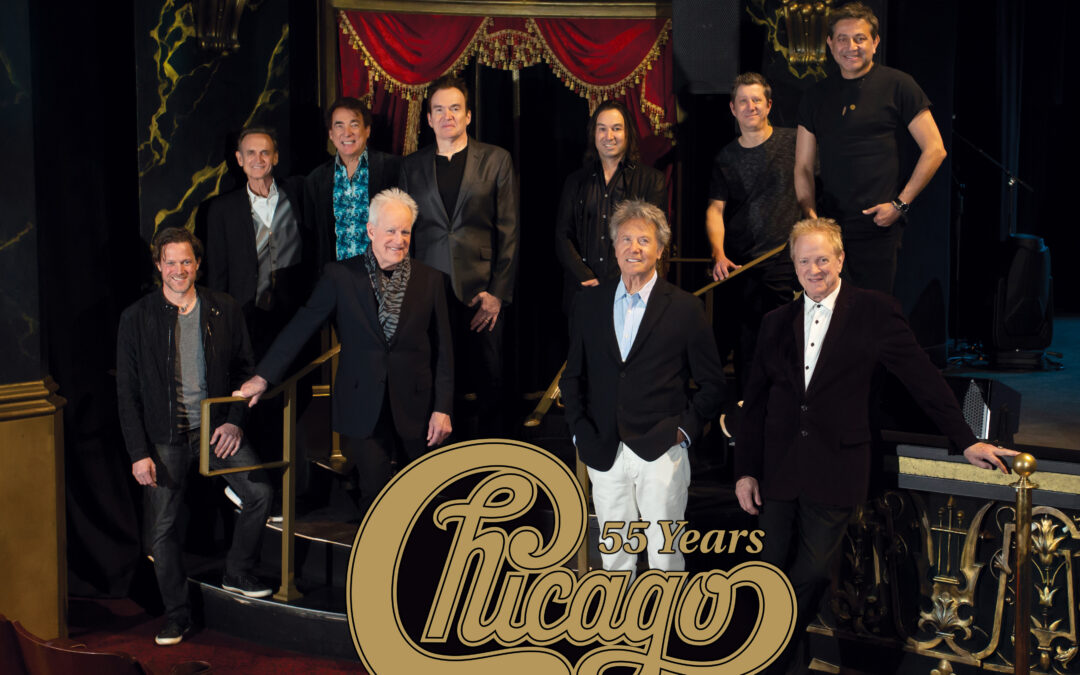 Talk to anyone about the music of Chicago and you’ll hear reeled-off the song title of hit after hit —  “Does Anybody Really Know What Time it Is?,” “Saturday in the Park,” “”Call on Me,” “If You Leave Me Now,” “Wishing You were Here,” “Baby, What a Big Surprise.” The list is seemingly endless and spans over five decades with every imaginable honor along the way from a Grammy Lifetime Achievement Award to induction into the Rock ’n Roll Hall of Fame.

For an interesting perspective on the band, I recently interviewed Chicago drummer Walfredo (Wally) Reyes, Jr. While Chicago original members Robert Lamm (keyboards/vocals), Lee Loughnane (trumpet), and James Pankow (trombone) are still in the band, Reyes, along with six additional accomplished musicians, help bring the big sound of the group to life. And, I might add, Reyes brings an impressive resume having toured as drummer/percussionist with the likes of Steve Winwood, Santana, Lindsey Buckingham, Boz Scaggs, Jackson Browne, Gloria Estefan, and others. He has been with Chicago for 10 years.

Walfredo Reyes was born in a family of musicians in Cuba, then Porto Rico. At age 13, the Reyes family moved to Las Vegas, Nevada when his father was hired as the drummer for the Desert Inn Hotel’s house band.

Walfredo soon picked up the drum sticks and followed the path of his father. Interestingly enough, Chicago’s 1969 debut record, “Chicago Transit Authority,” was the first album he purchased with money made from mowing lawns in his neighborhood. Why Chicago?

“My dad was a Cuban jazz musician and my mom, in the kitchen, was always playing the Salsa, Latin records,” Reyes explained. “I was a teenager so I had the British Invasion fever — Rolling Stones, Led Zeppelin, The Who, The Beatles, and all that music that came through the radio when I was in Porto Rico being raised.

“When I heard Chicago,” Reyes continued, “it was still rock, long-haired hippy looking guys like the guys from bands I liked. It was a revolution, not just music. It was our music.

“So when Chicago came out with horns and jazz stuff and different styles, my dad went, like, ‘Damn, who is that?,’” said Reyes.

The first Chicago song Reyes heard on the radio was “Beginnings.”

“I loved the drumming; the tom-tom fills and the song itself,” Reyes recalled. “Then later “I’m a Man” came on the radio. The guy (DJ) said it was Chicago Transit Authority. I went, ‘That’s the same band.’”

What Reyes really loved about Chicago as a teenager was they could play the rock music style popular in the late 1960s and early ‘70s, but also expand the sound with jazz, Latin and other influences.

He continued to follow the music of Chicago even as, at the age of 16, he began playing in clubs, lounges and big stages of Vegas with singers such as Paul Anka, Marilyn McCoo and Ben Vereen. He believes his generation — Baby Boomers — remained loyal to bands they liked, more so than today’s audiences.

“I have three grown kids and they are not as faithful with artists like we were,” explained Reyes. “When the first Beatle album came out to the last Beatle album, I had them all. And then Led Zeppelin “I,” “II” and on. And the same with Chicago.”

Chicago has sold more than 40 million albums thus far in America alone, with 23 being certified gold, 18 platinum, and 8 multi-platinum.

Because of Chicago’s horn-forward material, many high school and college marching and concert bands perform their music. As a result, in today’s concert audience Reyes sees a lot of younger faces — people who know the music and who are anxious to hear the songs performed by the legendary hitmakers.

“A lot of the young kids now are going back and learning Chicago music,” Reyes said. “They’re coming to the concerts. They may have heard these records through their dad or grandpa. Now that they are studying music they’re going back. It’s interesting.”

One Chicago tune performed by marching bands is “25 or 6 to 4.” Its opening riff is instantly recognizable and full of energy.

“The perfect song is a song that has a hook,” Reyes said. “If you cannot hum the song, you cannot take anything away from that song. That song has many hooks — the guitar solo, the bass line, the drum beat. I am a hook musician. There has to be something for the audience to take away, and Chicago had that magic. Even though they were serious musicians and could have put out a very complicated record that other musicians would be blown away by, but they gave those hooks to the regular people. That’s why it was so successful and they still are.”

Ballads have been a major part of Chicago’s radio success. Songs such as “Colour My World,” “Wishing You Were Here” and “(I’ve Been) Searching So Long” remain fan favorites.

“It goes to show you once again the prolific versatile writing of Robert Lamm, Terry Kath, Jimmy Pankow and Peter Cetera.,” said Reyes. “Some bands are great at only one thing, but those guys can write the love songs, the fun songs, the rocking song. A lot of people love the mega ballads, but we do a rocking show.”

In fact, Chicago’s rockin’ songs like “”Feelin’ Stronger Every Day” and the straight-up pop songs such as “Call On Me,” “Saturday in the Park” and “Just You ’n’ Me” continue to bring audiences to their feet at concerts.

“My job with Chicago is to add the right amount of groove to each song,” said Reyes, from a drummer’s perspective. “It’s almost like cooking with the right amount of salt, pepper and flavoring. So I play for the songs, not my ego or showing off. That’s not why I’m there. Whatever the song needs I play. As a drummer there are a lot of songs that only need salt and pepper. Chicago, for me, is a very versatile band those songs have shuffles, 6/8 triplets, there’s Latin, there’s jazz. So when you go to a Chicago show we open with “Introduction,” which as five different styles. As a drummer, if you don’t know different styles you can’t cut it. Chicago switches gears a lot. It’s like a buffet of styles.”