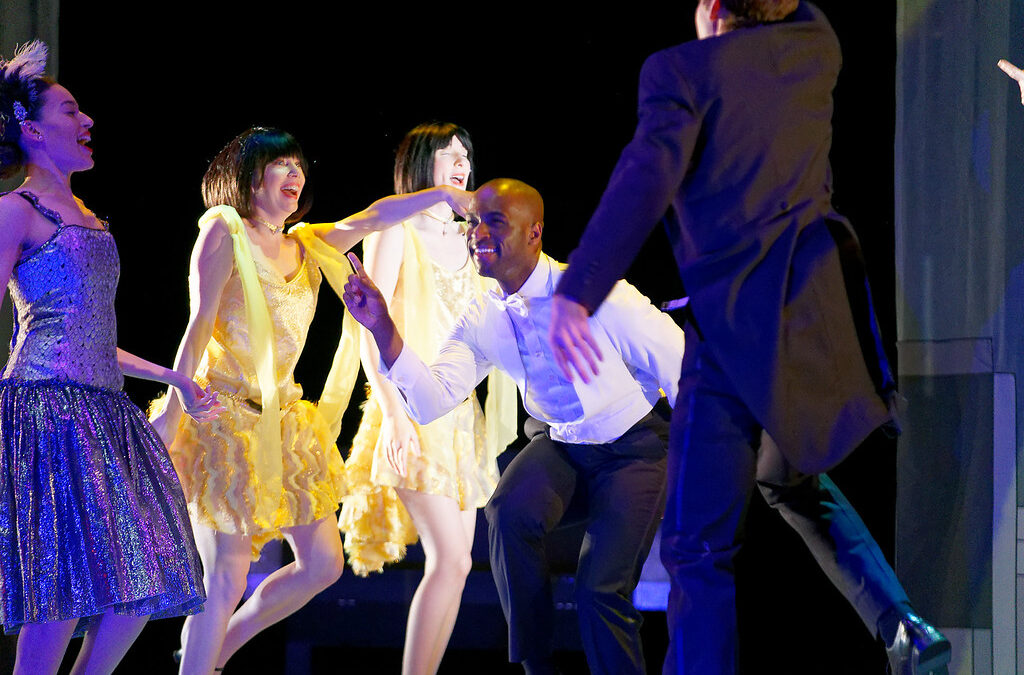 The Aquila Theatre’s casting of The Great Gatsby, coming to the Norfolk’s Attucks Theatre April 8 as part of the Virginia Arts Festival, significantly ups the ante on the Roaring 20’s/Prohibition Era novel’s themes of class and racial and geographic privilege, and of social and economic outsiders and insiders.

And Jordan Baker, the female golf pro, is mixed race, but is tacitly accepted in a racially prejudiced white society because of her wealth.

Daisy is also Gatsby’s former lover, to whom he is still devoted. Tom Buchanan superficially accepts both Gatsby (when he is unaware of the man’s love for Daisy) and Baker because of their wealth, and obeys the superficial rules of polite society toward guests in his home.

Aquila’s Artistic Director, who adapted F. Scott Fitzgerald’s 1925 novel for the stage and directed this production, talked about all this and more during a wide-ranging telephone chat from her home office in New York City.

One point she made was that she is of “Puerto Rican descent, a mixture of African, White European and Indigenous Taino DNA.”

“I grew up at a time when people like me just tried to get through,” she said, “and not be categorized.” She remembers being asked, before it became inappropriate, “Where are you from?” Her invariable answer, “Connecticut,” often prompted the remark, “No, that’s not what I meant.”

So the theme of  ancestral imprecision when others deem such precision important, of an outsider “passing” as an insider, which is precisely what poor Midwesterner James Gatz, self-transformed into mysteriously wealthy Long Island socialite Jay Gatsby, does throughout most of the novel, “resonates” with her, she noted.

Gatz’s exact birth ethnicity, or nationality or race or religion, are “ambiguous” in the original, she pointed out.

Sanchez “reread” the novel “at the height of the George Floyd conflict that was bubbling up in the news.” She had not really understood the book until then, she said, though she had read it in high school and, as a member of the Metropolitan Opera’s resident ballet company, danced in the Met’s operatic adaptation.

“This story really articulated themes we are still struggling with, in terms of folks wanting  to redefine themselves in an effort to succeed…in an effort to be at least equal to, or better than their neighbor.”

“Beneath the veneer of …this moment that we look back on, …the Roaring 20’s… being free and able to just party…wasn’t the case for everybody. [Fitzgerald] very articulately and poetically shows the disparity in terms of wealth, of the haves and have nots, based on ones racial or ethnic differences…I was dismayed that so many productions, modern interpretations, left out people of color.”

To folks who have “really read the book,” indeed to anyone, familiar or not with the story of Jay Gatsby’s once thwarted but never diminished love for the married Daisy Buchanan, she would say “Enjoy the show. This is one person’s perspective. I’m just trying to portray what came though as I read it.”

“I think that’s the beauty of theater. You can do any piece of theater over and over and it will be different each time…every time we tell the story of anyone’s life we will hear something different, even though we know the story.”

She likens live theater to the ancient bards, telling and retelling, singing the familiar myths to their gathered tribespeople. “There’s a little piece of recognition that gets embedded in there that can only be accessed at certain times in ones life. That’s why it is important to keep performing these stories.”

(Even the ancient Greek myths, which, narrated and enacted gave birth to Western theater, have links to older African myths, she found out in general research.)

All cultures, she pointed out, “have this one thing in common: the need to tell each other stories.”

“The thing that makes us different from other species on the planet (that we know of), is how we pretend to be other people, right? and how we tell each other stories.”

Asked “Was F. Scott Fitzgerald a bard? [In the old, tribal and Homeric sense]” she replied, “Yes, I believe he was.”

She won’t claim to be such a bard herself, nor does she refuse the suggestion that she is, but says only “Right now I just have the necessity to tell my stories, to tell the world what I am witnessing…when somebody witnesses something they are actually bound to share it out of necessity.”

What she has witnessed as a person of color, when people tried to categorize her by skin and hair and features, now bears witness to the larger issues of class and race that Fitzgerald wove into his story of a love that transcended boundaries, for audiences to witness for themselves.