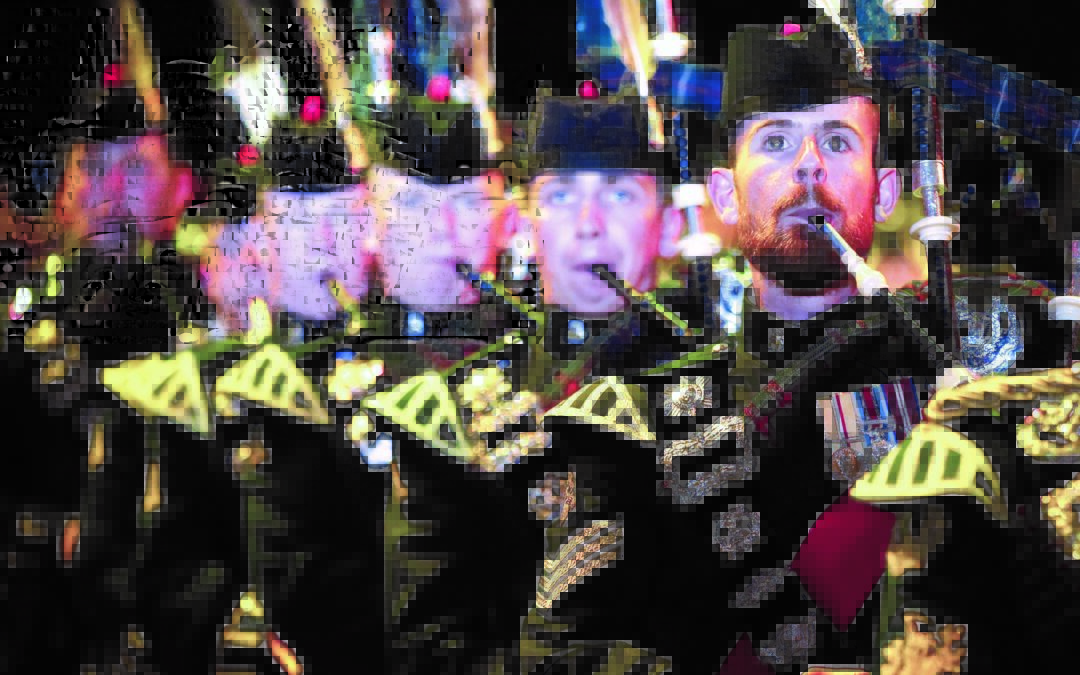 (Bagpipers are a fan-favorite during the Virginia International Tattoo. Pictured in the foreground is Pipe Major Peter Grant for the Royal Regiment of Scotland – 4 Scots. Photo courtesy of Virginia Arts Festival.)

This year’s 4-day Tattoo is scheduled April 28 through May 1 at Norfolk Scope Arena.

Wikipedia describes military tattoos as a “performance of music or display of armed forces in general.” The most famous in the world is the Royal Edinburgh Tattoo held on the Esplanade in front of Scottish capital city’s dramatic, hillside castle.

The Virginia International Tattoo features American armed forces branch bands as well as an international cast. It’s a rousing salute to the military and our allies, a real spotlight on Norfolk’s historical connection to the armed services.

To get the latest on our local Tattoo, I reached out to its founding producer Scott Jackson. Jackson is also the general manager of Virginia Arts Festival.

VEER: The Virginia International Tattoo was the only Tattoo in the world to be presented last year. Does that give you a sense of accomplishment?

Scott Jackson: Yes, I think that the entire community can take great pride in the level of resilience that the region has displayed through these last two years. For the Tattoo in particular, one of our core missions is to honor and recognize the resilience of our military. I particularly like the word that the military uses for this – intrepidity – which is a word so rich in meaning but basically boils down to resolute courageousness. We have celebrated and been around a lot of intrepidity over the years with special guests including original Tuskegee Airman, Medal of Honor Recipients, World War II Veterans, Vietnam Veterans, and Groundbreaking Women in the military – just to name a few. In 2021 it was time for the Tattoo to show some resolute courageousness. Despite the many challenges, we never wavered from our commitment to presenting a world class Tattoo as part of our 2021 Virginia Arts Festival.

VEER: You pivoted last year by holding the Tattoo outside at SB Ballard Stadium ODU. Most Tattoos in the world are outside events, but my sense is you’ll be glad to return to Norfolk Scope this year. Please explain why.

SJ: Most importantly, the Virginia International Tattoo has been an indoor show from its inception and our show has evolved to take full advantage of being indoors. We can offer our cast and patrons a climate controlled environment which allows performers to be at their best and the audience to enjoy a show without having to fight through any discomfort or distraction from heat, cold, wind, rain, etc.  We can perform much more complex music because we have better acoustics indoors and we don’t have to worry about how wind affects the sound and causes problems with the microphones. We can rely on more sophisticated lighting and video as part of the story telling aspect of the show and equally importantly, can better control darkness as a theatrical device. By having our Hullabaloo for three hours prior to each show outdoors we offer the best of both worlds.

I would also say that we had a great experience at ODU’s SB Ballard Stadium last year, it is an outstanding venue and we received enormous support from the University and venue staff.  The key issue is weather patterns in Virginia – when it’s warm enough to be outside you are always facing the possibility of thunderstorms. You can prepare a great show for a rain or shine environment, but you there are no options to perform when there is lightning present or anywhere nearby.

The oldest and biggest Tattoo in the world, the Edinburgh Military Tattoo, has been presented outdoors for more than 70 years without ever losing a show to weather. I can tell you from personal experience that it can get very cold and windy in Scotland even in August, but they don’t have the risk of thunderstorms.

VEER: Bus tour groups are a big part of the Tattoo’s economic success not only for ticket sales, but also hotel stays and restaurant visits. What are the advanced bookings looking like this year?

SJ: The advance bookings are outstanding. We have two key types of tour groups that love the Tattoo, senior groups and student band groups. They have been very limited in their ability to travel over the past 2 years and there is a lot of pent up demand. Groups bring so much to the region from an economic impact standpoint, but they also bring great energy to the events themselves. Tattoo Groups both attend and march in the Parade of Nations, they visit other attractions throughout the area and they are often are our best ambassadors as they tell friends and family back home about what a truly special experience they had in Hampton Roads. We get a lot or repeat groups every year.

VEER: What was the first Tattoo you attended and how did you decide Norfolk was the ideal city to present such an event?

SJ: The Tattoo that I first attended outside of the U.S. and the one that has had the biggest influence on us in Virginia was the Royal Nova Scotia International Tattoo in Halifax, Nova Scotia. Halifax has a lot in common with Hampton Roads. It is a place with a vibrant shipping/port business, they have a strong military and especially navy community and they are an important tourist destination. Watching what a great fit a Tattoo was for Halifax really gave us confidence that we could create something special with a Tattoo here in our area.