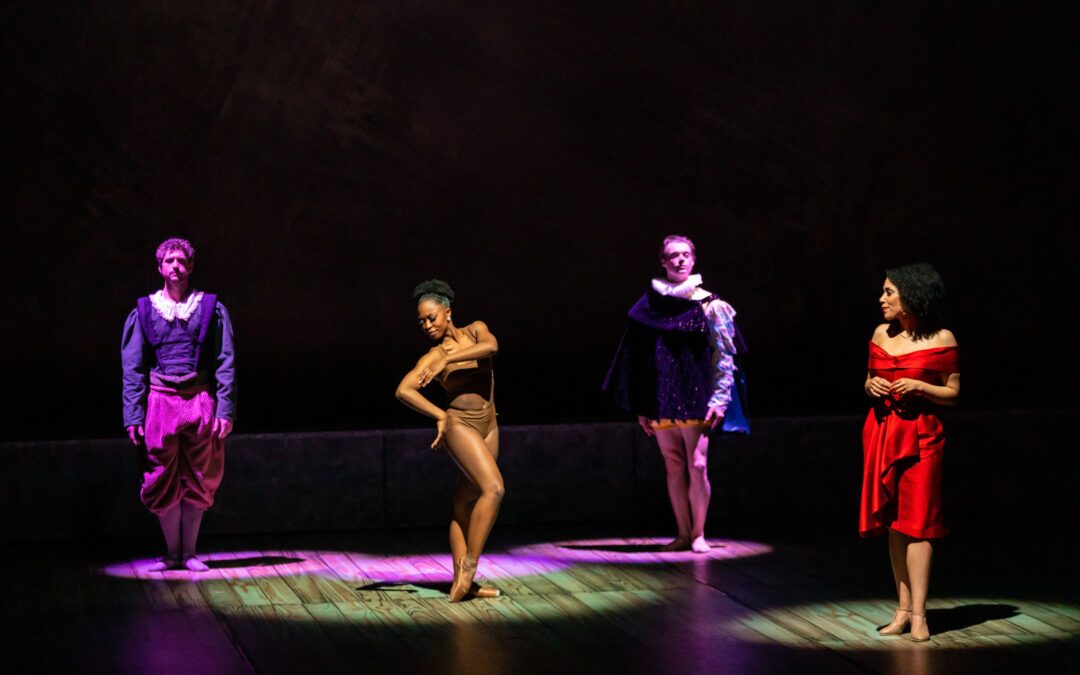 The February 2019 world premiere at TPAC’s Polk Theater of Nashville Ballet’s Lucy Negro Redux, a provocative and illuminating work of contemporary ballet that embraces spoken word poetry, narration and a range of acoustic music, garnered considerable national attention and acclaim. Even The New York Times devoted a number of highly positive articles to the ballet’s premiere in Nashville.

Lucy Negro Redux is a sensuous and cross-disciplinary work of dance, which was written and choreographed by Paul Vasterling, Nashville Ballet’s longtime artistic director, and based upon the 2015 book of poetry by Nashville’s famous writer/activist/scholar, Caroline Randall Williams. With its score written by acclaimed singer/songwriter Rhiannon Giddens, and performed live by Rhiannon and Francesco Turrisi, the ballet imagines a love triangle between the character of Shakespeare, and his “Dark Lady” Lucy, and the “Fair Youth.” Caroline appears on stage, and narrates the work, giving voice to Lucy—whose life and perspective is at the center of this groundbreaking work.

“I’ve done a lot of Shakespeare over my time, in ballets… I’ve done MacBeth, Romeo and Juliet, A Midsummer Night’s Dream,” says Paul, during a brief chat by phone a few days ago. “And so his language many times speaks to me.” And when someone passed him Caroline’s book, her poetry spoke to him as well.

“And then of course Caroline’s language was inspired by, in many ways, and were riffs upon Shakespeare’s own language, but accepted through her own personal lens,” he says. “For me personally as an artist, there’s a real affinity for Shakespeare…he speaks in multitudes.”

William Shakespeare’s so-called “Dark Lady” sonnets describes a woman who may have been of African descent, though that has never been factually established, despite various efforts to. Lucy Negro is one of the names mentioned, and this “black” woman apparently owned a brothel in London. It’s an intriguing story, and it inspired Caroline’s well-regarded book.

Yet it was really Paul’s desire to find an ideal work for one of his company’s stand-out ballerinas, Kayla Rowser, who has since retired, that motivated him to pursue the possibility of Lucy Negro Redux becoming an actual ballet. “I was looking for ballets that might fit her, for her to tell a story in,” he says. “I definitely saw Kayla in the role of Lucy.”

After contacting Caroline about his ambition to turn her literary work into a work of dance—Paul eventually headed to New York as part of a fellowship that he won to develop a story ballet. That time in New York was spent working on the story of the ballet, and included considerable input from Caroline, who joined him there for a few days. Her suggestion that “there needs to be a moment of just Shakespeare and Lucy in love,” as there is so much drama to come later in the work, was followed by Paul and changed the ballet’s beginning.

Paul also listened to his principal ballerina, whom he developed this work for, as it pertained to the actual choreography, which he considers an inherently collaborative discipline anyway. Kayla expressed to him, during the preliminary stages for just doing movement for Lucy, that she felt most powerful as a woman and dancer, when en pointe. “My plan was to do it in flat shoes for most of the ballet, and then by the end, put her up en pointe,” he says. But after receiving that feedback from Kayla, he reimagined the choreography. “It really changed the choreography for the character of Lucy. She’s the only one en pointe, pretty much all the way to the end of the ballet.”

“It really sets her apart, and also makes her movement more of the classical ballet idiom,” Paul continues. Once Kayla retired though, he says it “was a little scary that she wasn’t around to do it anymore.” However, this nationwide tour of the ballet, which plays Norfolk’s Chrysler Hall for a single performance later this month, will feature a couple of different ballerinas who will inhabit Lucy in a new way, which Paul is happy about.

“We got these beautiful other dancers to step into the role, Imani and Claudia, and what I love most about it is how different they are in it,” he says. “And how much they’re able to bring their own experiences to what they do.” For the Norfolk performance, ballerina Imani Sailers portrays Lucy, while Garritt McCabe, who is a new addition to the company, is the Fair Youth.

Prior to my chat with Paul, I was called by Imani, to chat about this big, important role for her. “I am really excited that Lucy Negro Redux is my first principal role for a full-length ballet,” she says happily. “This role definitely required a lot more care on my body—just because it’s a lot more involved than the roles that I have performed with Nashville Ballet in the past.”

A Chicago native, Imani has done a lot of prep work for the role, going back to being an understudy for Kayla, during the 2019 premiere. “The biggest thing that sets Lucy apart from other roles, is just the amount of character development that we’ve had to do, all three of the principal characters in the ballet, but especially Lucy, just because this is her story.”