JAZZ: Stepping Out with Diana Krall 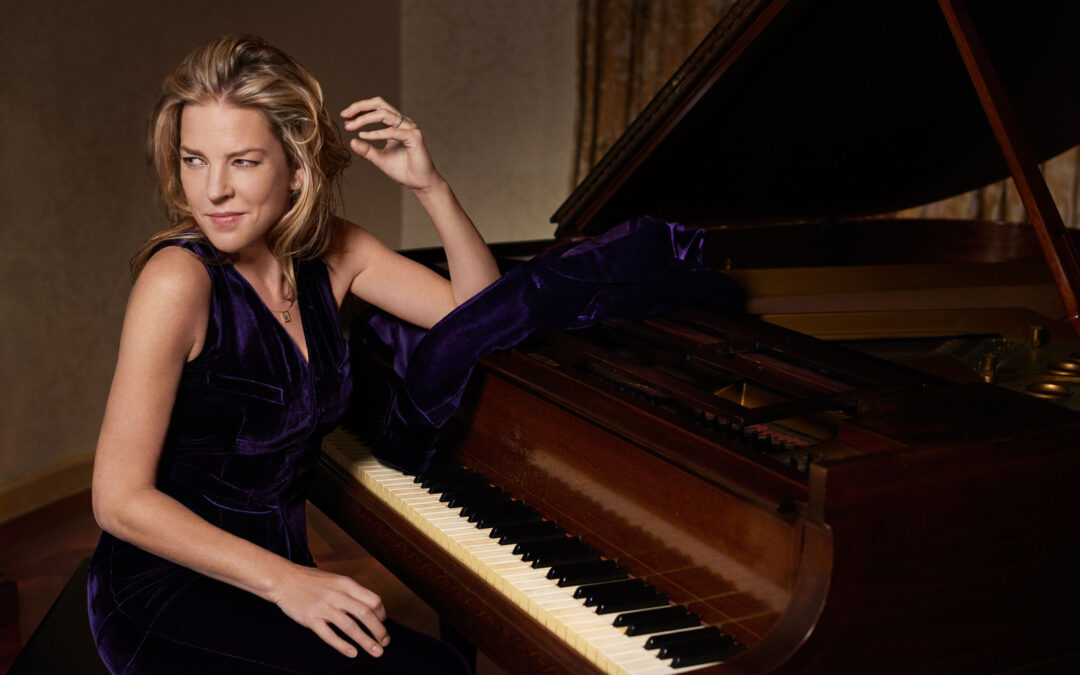 Diana Krall may be a marquee jazz singer today, but she grew up as a piano player, listening to her father’s collection of 78s, never imagining more.

“Oscar Peterson, Monty Alexander, and Bill Evans were the really important artists for me as a young piano player in high school, not to forget playing along with Elton John records in our basement,” she said in an interview earlier this year.

Krall, who plays the Ferguson Center for the Arts on April 30, also saw her heroes live as a teen.  “I grew up on Vancouver Island, Canada,” she added, “but I got a chance to see both Oscar Peterson and Monty Alexander perform live when I was about 16. Those experiences definitely changed my life.” As for Bill Evans — “I love Bill Evans. The first recordings I heard were given to me by my high school band director, Bryan Stovall. They were “Live at the Village Vanguard” and “Waltz for Debby.” Then, I heard the albums with Tony Bennett and Claus Ogerman, and, of course, “Kind of Blue” (the classic 1959 Miles Davis album).”

The three-time Grammy winner who has had eight albums debut atop the jazz charts changed paths, as so many artists do, thanks to that one mentor.  “I really wanted to be a jazz musician. I wasn’t singing at that time. I was at Berklee College of Music and came back home to B.C. I figured I’d go back to school,” she said. “I finally got a scholarship to another school in Boston and then I got the call to study with [jazz musicians] Jimmy Rowles, Ray Brown and John Clayton—people I’d listen to on vinyl as a kid. So I remember talking to the [registrar’s office] about the fact I had this opportunity to go to L.A. to learn from [musicians] who used to play with Billie Holiday. She said, “I’m sure this will be much better for you.” Who would say that?”

She used a Canadian government arts grant to move to Los Angeles to start her career.  “I drove down with my father and I rented a room in a house in the suburbs of L.A. It didn’t even have a door. Before I got the grant, I had to fill out all these forms. Ray Brown wrote my letter of reference on a cocktail napkin,” she said.” Jimmy Rowles doodled a little animated character of himself on my application form! I sent it all in. Thank God there was somebody who understood it didn’t matter if my references weren’t typed out formally.”

She released her first album, “Stepping Out” in 1993, funding the recording herself. Producer Tommy LiPuma liked what he heard and they began a long partnership with her second album, “Only Trust Your Heart.” “I started playing in piano bars when I was 15; that’s two years older than my kids are now. I did my own album before all that and raised my own money for it. I worked and worked and got to New York City and was introduced to Carl Griffin (then the senior VP of A&R at GRP Records) who was, credit where credit’s due, looking to sign me first,” she said. “He gave me that chance and believed in me before Tommy heard me. He turned Tommy on to that BET thing… You find people to champion you, partner with you. Al Schmitt (the renowned recording engineer), Tommy and I had an amazing partnership. Tommy wouldn’t sit in the booth. He would sit with me in the room when we recorded.”

He was a devoted partner. “He would sit with his headphones on, eyes closed, and let the music be. When you finished a tune, he’d just let it be… until he opened his eyes,” she added. “He’d look at you and say, “Yeah,” or “One more,” quietly. Ever so quietly. He knew I needed quiet to work, to process, to vibe off of the musicians. The less Tommy said, the more he knew he would get from me. The more that we worked together, the more intimate that process, and trust, became.”

Her 2017 Verve release, “Turn Up the Quiet,” was the eleventh and last he produced before his death. Their work spanned every genre from the Great American Songbook to popular songs by writers like Tom Waits, Chris Smither, and Joni Mitchell to compositions she wrote with Elvis Costello. The two married in 2003 and have twins.  Her 2020 release, “This Dream of You,” features the title tune by Bob Dylan plus classics including Vernon Duke’s “Autumn In New York,”  Irving Berlin’s “How Deep Is The Ocean,”  and Gene Kelley’s “Singing In the Rain.”

How does she choose what to cover?  “I just pick songs I like, in which I can find a story, whether it is Joni Mitchell or Irving Berlin,” she said. “But, about the greatest composer I can think of is Duke Ellington.”