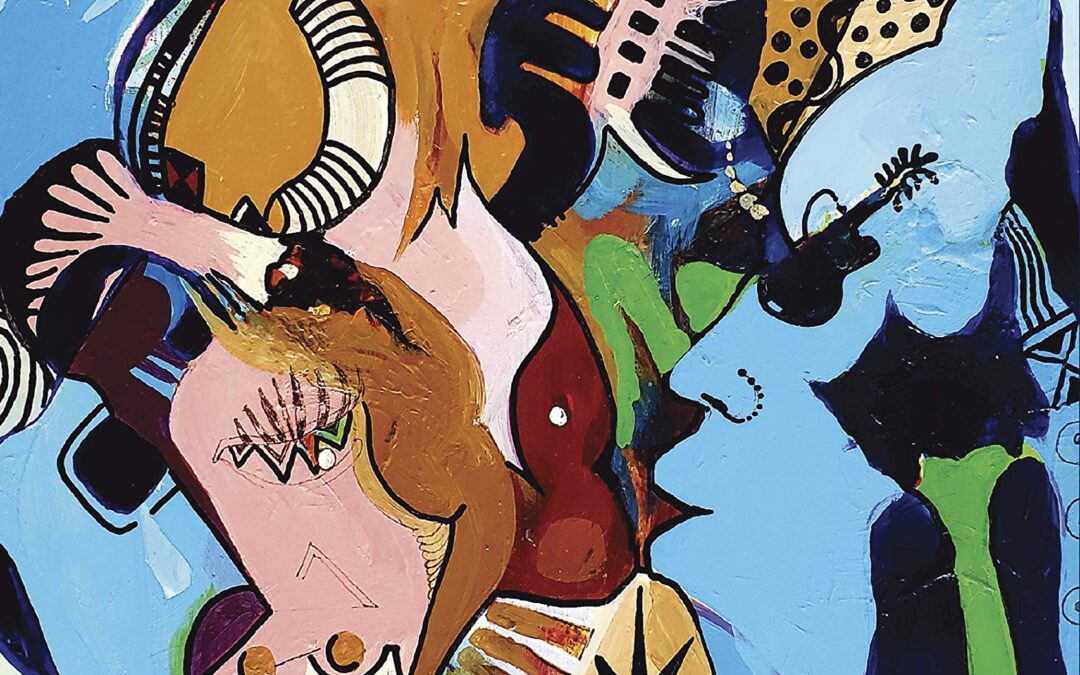 And I go on believing in the possibility of love. – Pablo Neruda

Twenty years ago, during my stint as editor of Port Folio Weekly, my friend Mike Pearson suggested that I get together with one of his colleagues at Old Dominion University—poet Tim Seibles—because the two of us seemed to have a lot in common. Shortly thereafter, Tim came to my office for a chat—and within minutes, I knew I’d met a kindred soul.

Among other things, we talked about the works of Ralph Waldo Emerson, the single most influential writer in my life. I’d met other people who liked Emerson. But up to that point, I’d never met anyone who seemed to fully understand why his writing speaks to me so deeply.

I thought about that conversation again recently when I picked up Tim’s new book, Voodoo Libretto: New & Selected Poems (Etruscan Press), and began reading the introduction in which he talks about his 40-year effort to “to build a home in poetry.”

“I don’t mean a career,” he writes, “but a place where I might be understood in ways that are simply unavailable in the daily shellacking of self I perform to approximate a character that can keep a job and pass for normal. I know I’m not alone in this daily self-erasure, this constant striving for the palatable face. We become so adept at adjusting that maybe we never fully comprehend how many masks we’re obliged to wear.”

Emerson—whose chief project in life was the liberation of the authentic self—would no doubt respond to that passage with an emphatic yes, especially if he could see the cultural developments that have taken place in the 21st century. In spite of all the lip service we give to “rugged individualism,” we are pressured on a daily basis to conform and march in lockstep to the clicks of the corporate machine. And in my observation, many people succumb to that pressure, albeit with no small amount of quiet desperation, to borrow a phrase from Emerson’s protégé, Henry David Thoreau.

Poets are an exception: our modern equivalents of the ancient prophets who laid bare potent truths about society, whether people wanted to hear them or not.

It’s a dangerous business in our culture, which strongly discourages people from pointing out that that the emperor has no clothes. As a result, some of our best minds have been destroyed by madness, as Allen Ginsberg put it in Howl.

Tim, in his introductory essay, reflects on this as well: “As a newly minted senior citizen,” he writes, he “can better see [his] own sharpening madness as it has taken shape over the four decades” that he has devoted to his calling.

In many respects, that sentence seems to be wholly at odds with the person that I have come to know. In conversation, he is unfailingly a model of equanimity, solidly grounded in his sense of self but always humble and kind. And yet, I get it: In these troubled times—when Trumpism and its relentless gas-lighting remains a potent force—it’s difficult sometimes to avoid the feeling that one’s own sanity is slipping away.

In such a society as ours, moreover, there is a kind of madness in choosing to devote one’s life to poetry. After all, mainstream culture doesn’t seem to value it very much. It may be fine for Hallmark cards but otherwise it strikes many people as frivolous and perhaps a bit suspect. At any rate, it’s something that makes many folks scratch their heads. I’ve lost count over the years of how many people have told me that they don’t read poetry because they don’t understand it. The fact that it has been given short shrift in our public-education system—and is often poorly taught when taught at all—makes matters all the worse.

Regarded in this light, Tim’s new collection seems all the more valuable because it makes the case that poetry is crucially important, both as a way of naming “what grinds our guts” and a way of reminding us of “our right to cultivate and savor all that’s marvelous.”

This book serves as a vivid reminder that Tim has devoted himself to both in equal measure. Like any good musician (he is, in addition to being a poet, a serious student of the guitar), he likes to mix things up, shifting easily from stark verses about grim socio-political circumstances to poems of magical whimsy to those of ecstatic celebration.

The more serious poems, in his mind, can perhaps offer some “resistance to bigotry and related dumbfuckery.” Take these lines from “MAGA Hat III: Strategy,” a persona poem channeling the racism of a Trump strategist: “Once upon a time, we owned everything, even basketball, but we got fat, got soft: equality. / Now you have miscegenation everywhere…. You don’t really think American history happened // by accident—as if the forefathers didn’t mean to do what they did. They meant it and they meant / for us to follow their lead. Did they ever // mention diversity? To say it simply: / some lives matter more.” Then, in the closing stanzas, he lays bare the cold strategy: “Liberals and mud people see Trump and wonder / how that got inside the White House. They’ve got no sense // of the long-term, the work required / to bring the harvest. The Donald is a seed. / They think today started this morning.”

And yet, throughout the book there’s also an abundance of celebration. Tim is especially good at capturing the magic of simple sensual delights, as he does in “First Kiss”: “Her mouth / fell into my mouth / like a summer snow, like a / fifth season, like a fresh Eden // like Eden when Eve made God / whimper with the liquid / tilt of her hips…”

In others, like “Notes from Big Brah, Tom the Bomb,” he revels in humorous nostalgia as he recalls advice about seduction that his older brother once gave him. Then, in the very next poem, the nostalgia is turned up a notch in a coming-of-age poem about a friend: “Our moms got us together at Woolworth’s / remember? Cheeseburgers. Summertime, 1967: twelve years in the world. Mostly we burned // for football / to get it and move, to shake anybody / that wanted to bring us down—six points / was all we needed and time to find the future…”

These quoted lines capture only a small portion of the astonishing variety of Tim’s body of work. In the wake of the horrific cruelty on display during the strangulation of George Floyd—and the subsequent swell of Black Lives Matter protests—his poems dealing with race strike me as especially important. He addresses this in the introduction by remarking on how “exhausting is the prevailing assumption that black folks are here mainly to bear witness to our troubles. We are here—like all people—to delight in our lives: to make whatever noise, dance whatever dance best marks our time on Earth.”

And yet, elsewhere, he emphasizes the need for “liberating social transformation, not just for people of color and other marginalized folks but for everyone who has suffered the many entrenched constraints on thought and witnessed chronic injustice wearing the face of the norm.”

Constraints on thought have always been part of our culture. We’re taught from an early age to “pledge allegiance,” then sit down and be quiet. But they’ve grown tighter in recent years. Several recent studies have documented that increasing numbers of people are afraid to speak their minds. The reasons are manifold, from the viciousness of Trumpism to the knee-jerk efforts of some on the left to punish anyone who appears to violate the dictates of political correctness.

With this in mind, it’s clear that Tim’s new collection couldn’t come at a more important time. He reminds us, first of all, that each of us was born with a “singularly distinct self” and our own songs to sing. At the same time, he believes that poetry can help us discover our “shared vulnerability.” [Emphasis added]. It should be abundantly clear, that therein lies our only hope.