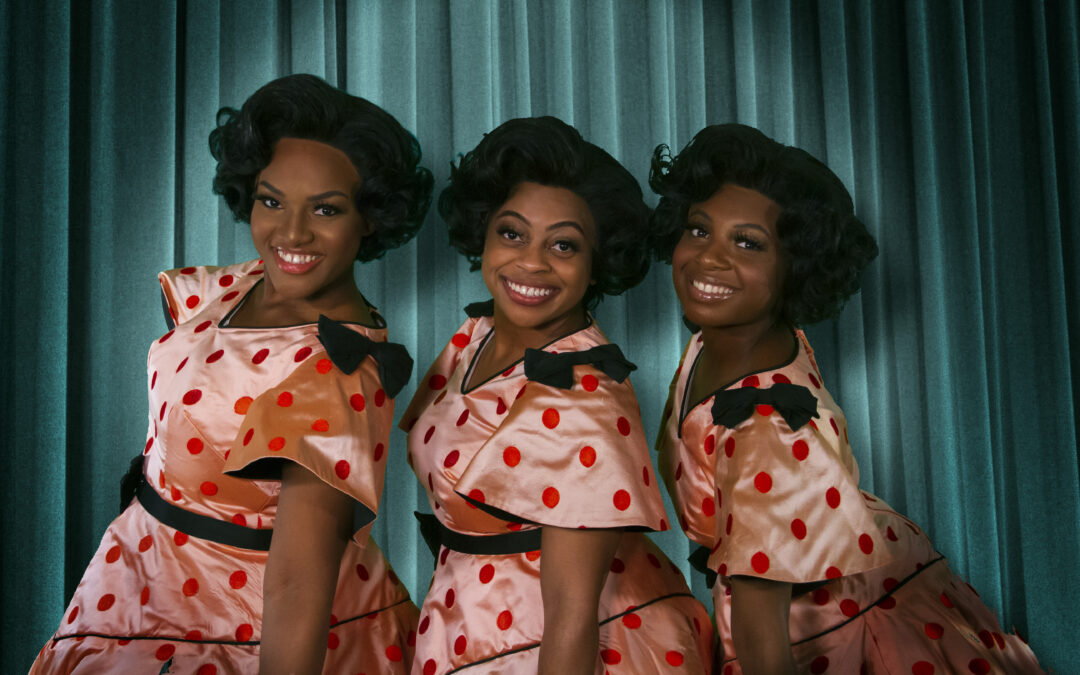 (The Dreamettes. Photo by Sam Flint.)

“I was holding on to this,” says Anthony Stockard, the producing Artistic Director of Norfolk State University Theatre Company, regarding his theatre company’s latest collaboration with Virginia Stage Company, the iconic Broadway musical, Dreamgirls, the latest show in VSC’s current 43rd season. “When I threw it out there, Tom was all for it.” Anthony is referring to Tom Quaintance, VSC’s producing Artistic Director, and this was back when they were first discussing collaborating for season 43.

NSU Theatre has collaborated on several high-profile VSC shows in past seasons, including the classic musical, The Wiz, which was a huge success during season 38. Anthony mentions some of these past successes with VSC during our chat this past Sunday at the gorgeous, state of the art G.W.C Brown Memorial Hall, the formal home of NSU Theatre Company, which is of course on the campus of Norfolk State University. The cast of Dreamgirls has been rehearsing there for just over a month, and will finally head to the Wells Theatre later in the week to prep for previews. Anthony and I are joined by two of the young, key cast members, both students at NSU, though one is actually working under an Equity contract. “This is the first time that students, NSU Theatre company members, and alum are being offered Equity contracts to perform under,” says Anthony, who pushed for this rare distinction. Consequently, after Tom agreed, several such cast members were offered these professional contracts normally reserved for the New York actors who come down to VA to perform in VSC shows.

Katelan Corprew, a current junior at NSU, is one of the recipients of an Equity contract, and she portrays Deena Jones, who many believe was primarily modeled after the legendary Diana Ross. Regardless of who Deena was inspired by, her character has one of the most striking arcs within the show. “She turns into this woman who is about her business. And she doesn’t want to be put in a box anymore,” says Katelan. “I identify with that part, when she wants to just break out and do everything that she can to be up to her potential.”

Much of Deena’s story, of course, is heavily informed by her relationship with Curtis Taylor Jr., the Berry Gordy type music figure whom she eventually marries and who turns her into a major star. “Her relationship with Curtis has a lot to do with the growth that you’ll see throughout the course of the show,” says the actress. “It plays a big factor in who she later becomes.”

C.C. White is being portrayed here by Adam Moskowitz, a freshman who is new to acting, but has a much longer history as a talented singer and musician. “C.C. is a very confident character,” says the young actor. “He’s confident in his work as a songwriter, as a choreographer, and he really sets the pace for The Dreams.”

Both Katelan and Adam impressed Anthony, who is directing the show, with their respective talents for singing, as well as their work ethic. “He has a wonderful singing voice,” the director says of Adam. “Both of them do.” The two actors are part of a large cast of 19, which is also supported by 15 musicians. And this is one of the first productions at VSC, since the pandemic began, that is able to relax some of the COVID-19 protocols for cast and creative team. Patrons are still required to wear masks inside the theatre though, regardless of vaccination status.

For this show, besides all of the great music and elaborate set designs…the costumes tell their own story. And Anthony is excited about the costumes. They are being designed by VSC’s Jeni Schaefer, and by Bryce Turgeon, a NYC based costume designer for major Broadway shows, who is well known for dressing some of the most popular drag queens, including Sasha Velour from RuPaul’s Drag Race. “He has come up with very elaborate, out of the box costumes for The Dreams,” says Anthony, with more than a hint of excitement in his voice. “They’re being built in NYC and shipped here.”

Virginia Stage Company’s production of Dreamgirls coincides with the 40th anniversary of the show’s original Broadway production winning six Tony Awards back in 1982. With book and lyrics by Tom Eyen, and music by Henry Krieger, Dreamgirls is easily one of the most successful Broadway shows in history featuring a predominately African-American cast. The show opened in December of 1981 at the Imperial Theatre and remarkably ran until August of 1985, following over 1500 performances. Besides its six Tony Awards, the show also won multiple Drama Desk awards and Grammys for its cast show album, including a win for Jennifer Holiday’s astonishing performance of “And I Am Telling You I’m Not Going,” which many R&B music critics still regard as one of the best female vocal performances of all time.

Following the success of the original Broadway show, a revival and a number of national tours followed…but it was really the blockbuster film adaptation in 2006, which starred Jamie Foxx, Beyonce, Eddie Murphy and of course, Jennifer Hudson as Effie White, which really introduced the story to the younger generations. That movie was nominated for eight Academy Awards, and saw Hudson win the coveted trophy for Best Supporting Actress.

Dreamgirls tells the story of a 1960s black girl group who through their success, hardships and eventual triumph over adversity— transforms the American music industry, and the broader culture at large, during some remarkably tumultuous times. And it’s an exciting history lesson about Black popular music of the mid to late 20th century, and even includes plenty of provocative relationship drama.