Downtowner Jack Was One of a Kind 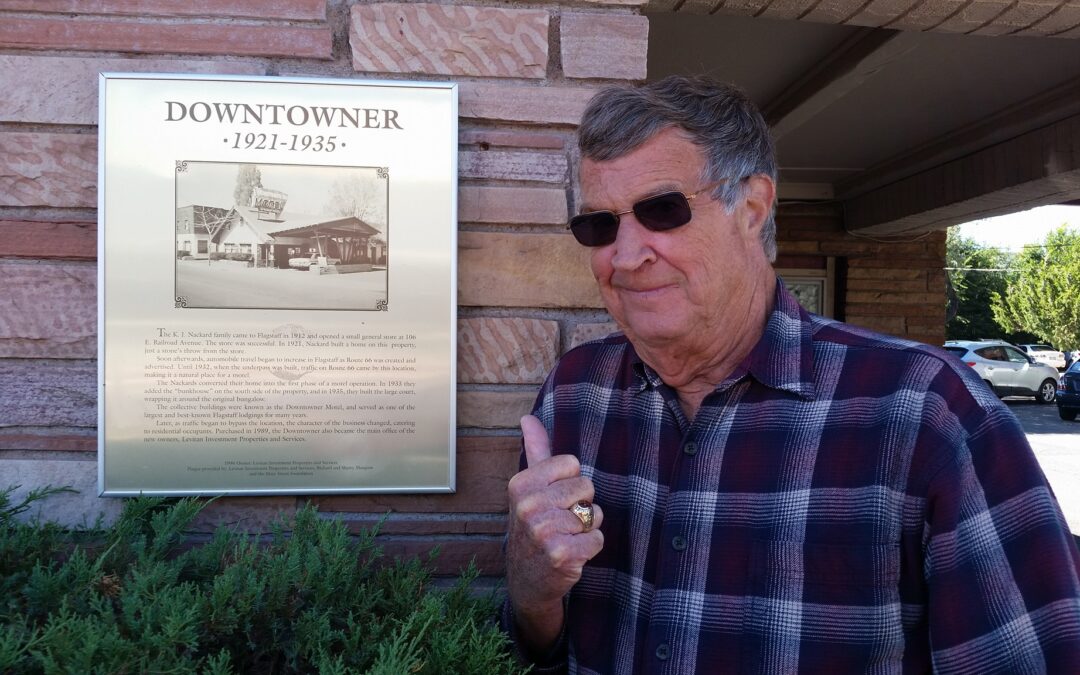 (Jack Armistead couldn’t resist a photo with this historic marker in Flagstaff, Arizona)

News of the passing of John “Jack” Armistead was announced on Facebook. Reaction from friends and acquaintances in the comments space was of shock and sadness.

Perhaps it was fitting Jack Armistead died on a Good Friday. After all, Jack was the epitome of goodheartedness. A common comment on social media was that Armistead was one of the nicest people you could ever meet, a one-of-a-kind gentleman, eternally positive, and a champion of his beloved city of Norfolk. All true.

There are those who had known Jack Armistead since childhood. Others who knew him only in passing at a bar, outdoor event in Town Point Park or walking down a Granby Street sidewalk with a welcoming smile and an extended handshake at the ready. Everyone can share a story about Jack.

For me, I first encountered Jack Armistead long before I “met” him as a friend. In 1980, I was a high school track athlete and Jack was on assignment to write a story for the Virginian-Pilot. He reminded me of this when we became reacquainted sometime in the late ‘80s as we commonly crossed paths in the local watering holes of Ghent. I dug out my saved newspaper clippings and sure enough there was Jack Armistead’s byline.

Less than a year after that Armistead article was published, he departed the daily newspaper’s sports staff and formed Target Advertising Company. Jack told me Target Advertising debuted as a direct mail service, sending coupons to homes in specific zip codes. This business model, as Jack explained, didn’t last long as national direct mail companies moved in, forcing him out of the business.

A love of writing and a longtime devotion to the business of community news led Jack Armistead to quickly shift gears with the launch The Downtowner, a monthly newsprint tabloid with the tagline “A Positive Voice Serving Greater Norfolk, Ocean View & Olde Towne Portsmouth.”

He published and hand-delivered The Downtowner for 34 years. It was widely available free of charge at locally-owned businesses.

Jack often told me his original mission was to prominently feature Carroll Walker photographs of Norfolk’s past. These captivating images from a bygone era were archived at the Kirn Library (now Slover Library).  Jack believed readers would marvel over how downtown was bustling in the 1940s, be fascinated to view everyday fashion on the streets of 1920, and to see how the city had changed for the better and worse over time. Each photo was accompanied by a brief description from historian Peggy Haile McPhillips.

Jack often lamented the loss of downtown architectural gems like the Monticello Hotel, Norfolk Flatiron Building, and Union Station, a railroad station demolished in 1963. Some building were destroyed by fire or became dilapidated, but many were razed through a federal incentive program called Urban Renewal.  Most of Norfolk’s unique character has been leveled. Through old, historic photographs, Armistead sought to remind locals of the city’s not-to-distant past glory.

In addition to these historic photographs, The Downtowner featured Armistead’s “Off the Beaten Path” column where he shared his recent experiences and observations; a 10 “Best of” List recognizing good deeds and accomplishments of people and business; “Pun Fun” penned by the late Abbott Saks; a general interest column by Gary Ruegsegger, and a spoof on “Dear Abby” advice columns he dubbed The Answerman, which really showcased Jack’s sense of humor.

Beyond The Downtowner, Jack Armistead enjoyed music. He was a fan of 1960s folk music and he played a 4-string tenor acoustic guitar. Jack also loved the blues, early rock’n’ roll, and classic rock.

Armistead also wrote music, releasing two albums titled “Friends in Music.” His studio recordings included a mix of cover songs and originals, compiling recordings and his favorite local guest musicians such as Bruce Gray, Nicky Bonis, Woody Nordan, Lewis McGehee, and Peggie Bruce. On “Friends in Music: Back to the City, Volume II,” released in 2006, Armistead unveiled what is arguably his best tune — the Rod Stewart-esque “Own Up.”

Jack was a regular whenever The Jailtones, Big Fun or Lewis McGehee performed live. If it was a Tuesday, Jack would often call me:

“Hey, it’s Jack. Are you coming up to see Lewis tonight at O’Sullivan’s (Wharf)?”

Jack Armistead was known to frequent neighborhood bars. He preferred Bud Light, but when the craft beer scene came to life was known to admire O’Connor Brewing Company’s Great Dismal Black IPA. Some of his favorite spots — past and current — were the Ghent Inn, Azalea Inn, the piano bar at the Downtown Marriott, Mermaid Winery, Mo & O’Malley’s Irish Pub, and Tortilla West. I’m sure there were many others. 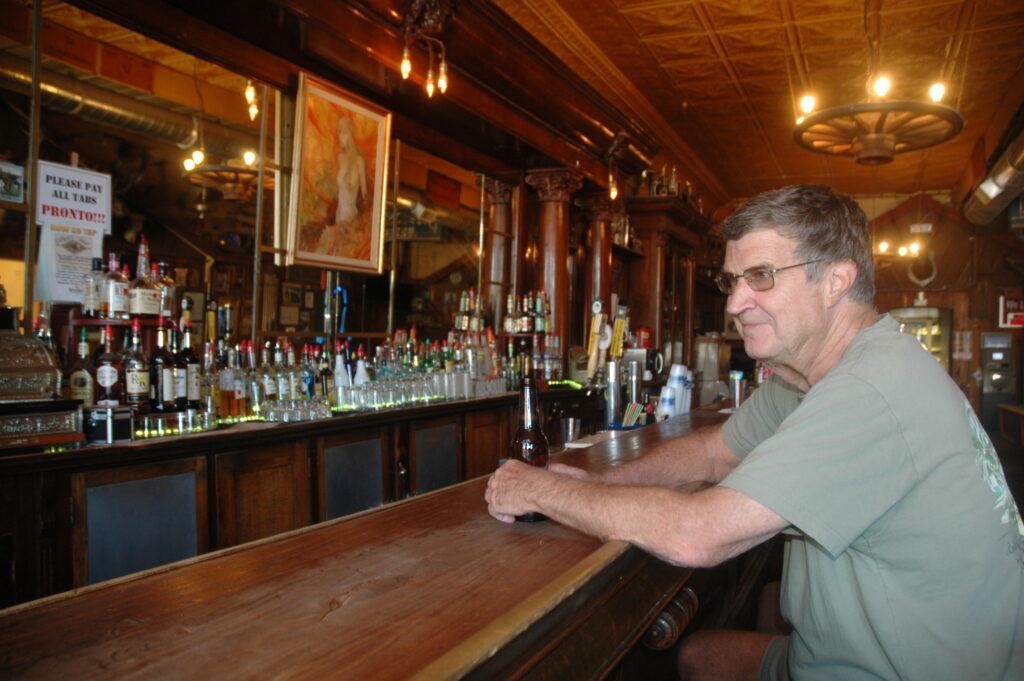 (Jack Armistead always felt at home at a local bar anywhere in the world. In this photo he’s saddled-up for his Bud Light at the Pioneer Bar saloon in the Old West town of Virginia City, Montana. Ten minutes after this photo was taken, dozens of dusty cowboys from the surrounding plains came in for an afterwork beer — a memorable experience for Jack.)

Jack preferred to sit at the end of a bar and strike up a conversation with staff. If there was a side or rear door, he would prefer that over making a grand entrance. Jack was modest in everything he did in life. He did this in his travels as well.

In the mid-1990s, Jack would inquire about destinations I had traveled to. Outside of visiting his sisters in Florida, he hadn’t ventured too far outside of Hampton Roads. That would soon change.

We began to plan several “guy” trips to places on his bucket list. Our first adventure was a week in Amsterdam. Jack wanted a day to explore solo and he started his morning at a coffee shop across the street from the hotel.

After an hour at The Grasshopper, Jack told me later that afternoon he ventured to Dam Square. At that time, performance artist “buskers” would paint their clothing, skin and hair so they’d appear as a statue stoically standing on a pedestal. Unassuming pedestrians were often confused as to whether they were real works of public, concrete art.

According to Jack, he moved in for a closer look, when a statue shifted position ever so slightly and gave him a wink. Fresh from the coffee shop, Jack later shared with a laugh, that he imagined he must have puffed one too many because he couldn’t believe his eyes — that statue was actually moving.

Talking with Jack was also an experience given his historical knowledge and humorous point of view. Plus that accent. He spoke in an old Norfolk, old Virginia dialect where, for example, the name Mary was pronounced Murray. I noticed the reaction of people in our travels doing a double-take when Jack began to speak, always bringing a smile.

During the pandemic, many people chose to hunker down. Not seeing familiar faces was common. When I didn’t hear much from Jack over the past year I didn’t think too much of it.

Gudi Seeger called me about six months ago to say Jack was ill but he wanted to keep his health issue quiet. I finally got a call from Jack a month before his passing. He shared that he had prostate cancer, lung cancer, and congestive heart failure. His voice was weak, but upbeat; the conversation one of reminiscing and it became obvious this was a farewell ol’ friend talk.

Holly Armistead Rose, Jack’s daughter, began posting on Facebook that Jack was keeping his spirits up and with a positive attitude. She had become his caregiver over the last year. Jack often spoke of how proud he was of Holly and his three grandsons.

In the end, Jack exited the world the same way he came and went from the Ghent Inn — through the back door with no one noticing, never wanting to make a fuss.  According to his daughter, Jack did not want a funeral or memorial service.

As many have said, Jack Armistead was one-of-a-kind. I would only add, Downtowner Jack is probably the last of a kind as well.