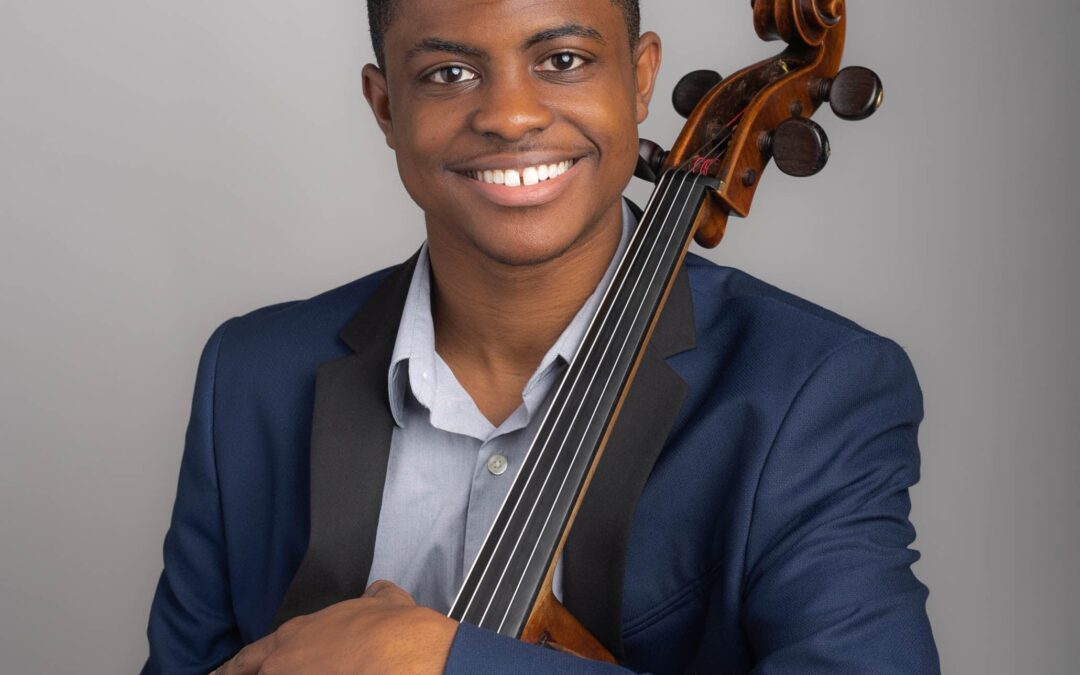 Hampton Roads natives who have gone on to excellence in some of the greatest musical venues of the world bring the achievements of two and a half centuries of musical innovators, rendered by the Virginia Symphony Orchestra, to the Ferguson Center for the Arts in Newport News for one night only, the last Friday in April.

The concert includes the work of a contemporary young composer who “brings to the business the same kind of newness, revolutionariness that Beethoven brought,” conductor Thomas Wilkins said.

“There is this thread of tradition and departing from tradition that runs through this program,” he added.

That composer whose innovative drive Wilkins likens to Beethoven is Atlanta native Carlos Simon – or formally, Dr. Carlos Simon, Jr., who earned his doctoral degree in music from the University of Michigan.

A cello concerto by Joseph Haydn, who was, in Wilkins’ words, “the crown jewel of symphonic writing when Beethoven was coming along” sits on the program between the 36 year old Simon’s Beethoven-inspired orchestral work from 2020 and the Beethoven 3rd Symphony that “helped usher in the Romantic Movement,” which dominated the musical soundscape of the 19th Century.

The Haydn piece is his 1784 or ‘83 Concerto in D major for Violoncello; Haydn’s numerous innovations included the string quartet and what became the traditional symphonic form.

VSO Principal Guest Conductor Wilkins, whose life story – Norfolk born, raised in poverty in the Young Park housing project, now a highly respected conductor, music director and university professor at one of the finest music school in the world – is becoming well known, took time from his thrice yearly teaching stints at the Indiana University Jacobs School of Music, where he holds the Henry A. Upper Chair of Orchestral Conducting, to chat about the concert by phone.

Asked about who chose this particular triplet of works, he said “I programmed everything but the Haydn, because that’s what the soloist is offering. Once that happens the idea is to build the rest of the program…around the sound world of the Haydn. So we basically pretty much stayed in Vienna, and Beethoven appeared when Haydn was at the height of his fame…So it makes sense to turn in the direction of Beethoven after the Haydn.”

“And Carlos Simon was inspired by Beethoven. So that’s sort of the thread that runs through the entire program.”

“I just met [Simon] recently and have been…intrigued by his writing and his enthusiasm  and knew I wanted to bring some of his music to Virginia at some point, and this has turned out to be the perfect time because of what else is on the program.”

“He has exploded onto the music scene. His formal training in composition came late in his life, and he’s been a quick learner and his writing skills have caught with his imagination…That’s the case for all of us in everything we do…Our maturity only enhances the energy that we hope to bring to the table.”

“This piece was inspired by a journal entry from Ludwig van Beethoven’s notebook, written in 1815:

But Fate now conquers; I am hers; and yet not she shall share In my renown; that life is left to every noble spirit.

And that some great deed shall beget that all lives shall inherit.’’”

“Using the beautifully fluid harmonic structure of the second movement of Beethoven’s Seventh Symphony,” Simon wrote, “I have composed musical gestures that are representative of the unpredictable ways of fate…the uncertainty of life that hovers over us.”

(Wilkins, in general remarks about Beethoven’s symphonies, termed that particular movement “one of the great moments in the history of Western music.”)

The Haydn concerto manages to be soaring and joyous, a showpiece for the soloist without being obtrusive, that is, without ever giving the sense that any element of it exists solely for the purpose of being a showcase.

That soloist is Sterling Elliott, a Newport News native. He’s the youngest winner ever of the nationwide Sphinx Competition for young classical string players of Black and Latin ancestry, a former student of Michael Daniels, the VSO principal cellist, and his professional career is well on its way. He’s soloed here,  and with four of the symphony orchestras of the so-called “Big 5”: New York, Philadelphia, Boston and Cleveland (no Chicago, yet). Plus Detroit, Dallas, Buffalo, Los Angeles, Richmond, West Virginia…

Wilkins worked with Elliott in Boston. “We did a last minute concert… right before the pandemic. The Boston Symphony had to cancel its Asian tour so we decided to do a program in Boston… and we invited this young man to participate and…the orchestra fell in love with him, and rightfully so. I’m really excited to get back with him, because he’s a terrific young man, a terrific human being and a really phenomenal musician.”

Victorian era music critic Corno di Bassetto wrote, “Haydn is refined as the most cultivated country gentlemen of his day were refined…Beethoven was an obstreperous Bohemian, a man of the people…Beethoven was a Sansculotte…Haydn a [court] flunky in the old livery…the [French] Revolution stood between them as it stood between the eighteenth and the nineteenth centuries.” (di Bassetto later turned to playwriting under the surname of Shaw.)

Wilkins has conducted Beethoven’s 3rd “at least half a dozen” times, he says, adding, “The older I got the more fun it was.” (Not unlike his remark about skills catching up with inspiration, he acknowledges.)

As a conductor, he asks of himself and his musicians, “What is it that Beethoven hopes that the listener gains from [some] phrase?”

“When I study Beethoven from an intellectual standpoint, I see his good ideas on paper and I realize how perfect they are…his genius is not just intellectually inspiring but it’s emotionally inspiring as well.”

Symphony No. 3 is the work of “a composer who shows you that he is willing to wear his heart on his sleeve..[It’s] impactful, it can be forceful and it can be utterly charming also at the same time, and then witty and clever.”

“The most important people in the room are sitting in the audience… It’s not about instruction, it’s about invitation.”