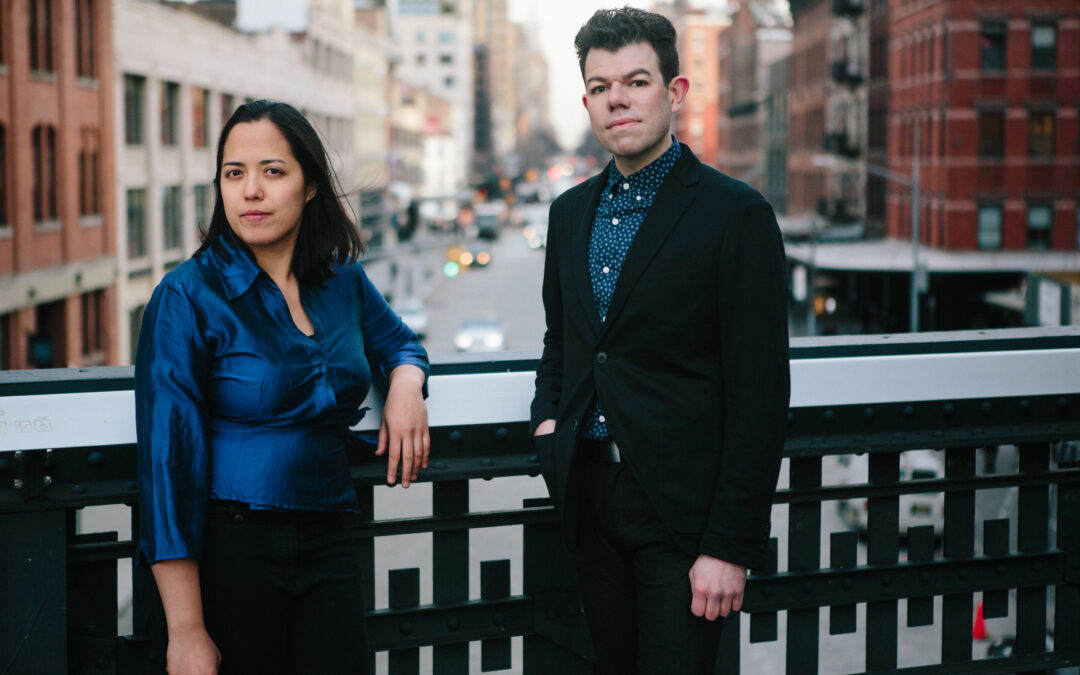 Some things visual and lots of things musical this way come, in the hands of a cello-percussion pair of performers/professors (accompanied by a computer wielding composer), a duo called New Morse Code.

Their Virginia Arts Festival March 30 concert at ODU kicks off a five city tour – here, UNC-Wilmington, and then westward to campuses in Denver, in Dayton, Ohio, and in Lawrence, Kansas. As first on the list, Hampton Roads gets one world premiere, plus the world premiere of a new arrangement of another piece, and also one multi-media work that has been in their repertory since 2015.

Compitello said, “Our love is music, music all across time and all across the world. For us it doesn’t matter whether the piece is new or from the 13th or 14th Century, what matters is the way in which performance can really connect people to one another.”

Composer Christopher Stark joins them on stage for his 2015 The Language of Landscapes, to “change, alter, delay and amplify” their music and pre-recorded “all natural sounds” electronically, while architect and multi-media artist Andrew Lucia’s video visuals, a non-linear, non-literal melding of primordial chaos, urban civilization, synesthesia and the awe inspiring power of raw nature, provide a backdrop of sorts.

Landscapes, which blends the natural and human made soundscape of daily living with instrumental music, is something like the heart of the program. “The challenges we face around our climate crisis and the optimism of space exploration and sustainability are themes that tie into the non-verbal connections we get from sharing a musical space,” noted Compitello.

The world premiere of a newly commissioned as yet untitled work by Andy Akiho, with a video component by projection designer Hannah Wasileski, concludes the concert.

Akiho’s piece has been inspired by NASA’s (University of Arizona linked) OSIRIS-Rex satellite that will return to earth in 2023 from its 400 million mile round trip to the carbon-rich asteroid 101955 Bennu, bringing back a sample of the asteroid’s surface. (It’s an attempt to learn the composition of early planets, searching for compounds that were precursors of life.)

New Morse Code were the grand prize winners of Ariel Avant’s Impact Performance Prize.That contest looked for a performance that was “designed to generate productive conversation and offer positive means of action addressing a social justice issue, particularly one related to the UN’s Sustainable Development Goals,” according to competition sponsor Ariel Avant’s website.

Collins and Compitello concocted the New Morse Code name from idea that the old telegraph language of dots and dashes was “a transformational technology or transformational language that enabled people to communicate across long distance…a new way of communication that did not destroy the past but added to the fabric of communication, which sort of describes what we are doing.” (Compitello) Plus, added Collins, “It’s a fun connection to a rhythmic language.”

This will not be a concert where the performers, “Unload, play, and reload and leave,” Compitello promised. Not only will they be doing master classes with ODU students, but early plans are being made for “a more experimental outreach event with how they collect sounds from the world around us to use artistically,” according to the Arts Festival. As Collins put it, “To create some space to think about the sound of the local environment, both natural and human made and actually build a musical team together,” much like how they worked with Stark on Landscape but “more specific” to Hampton Roads.

Compitello added, “We’e excited to share some brand new music. Music can…create these incomparable moments. The experience of audiences and performers – it can’t be replaced.”

“We’re excited that we are going to get to know people in the community and get to know what kind of issues they’re thinking about and… what their community sounds like.”

“We’re always excited to talk to our listeners.”